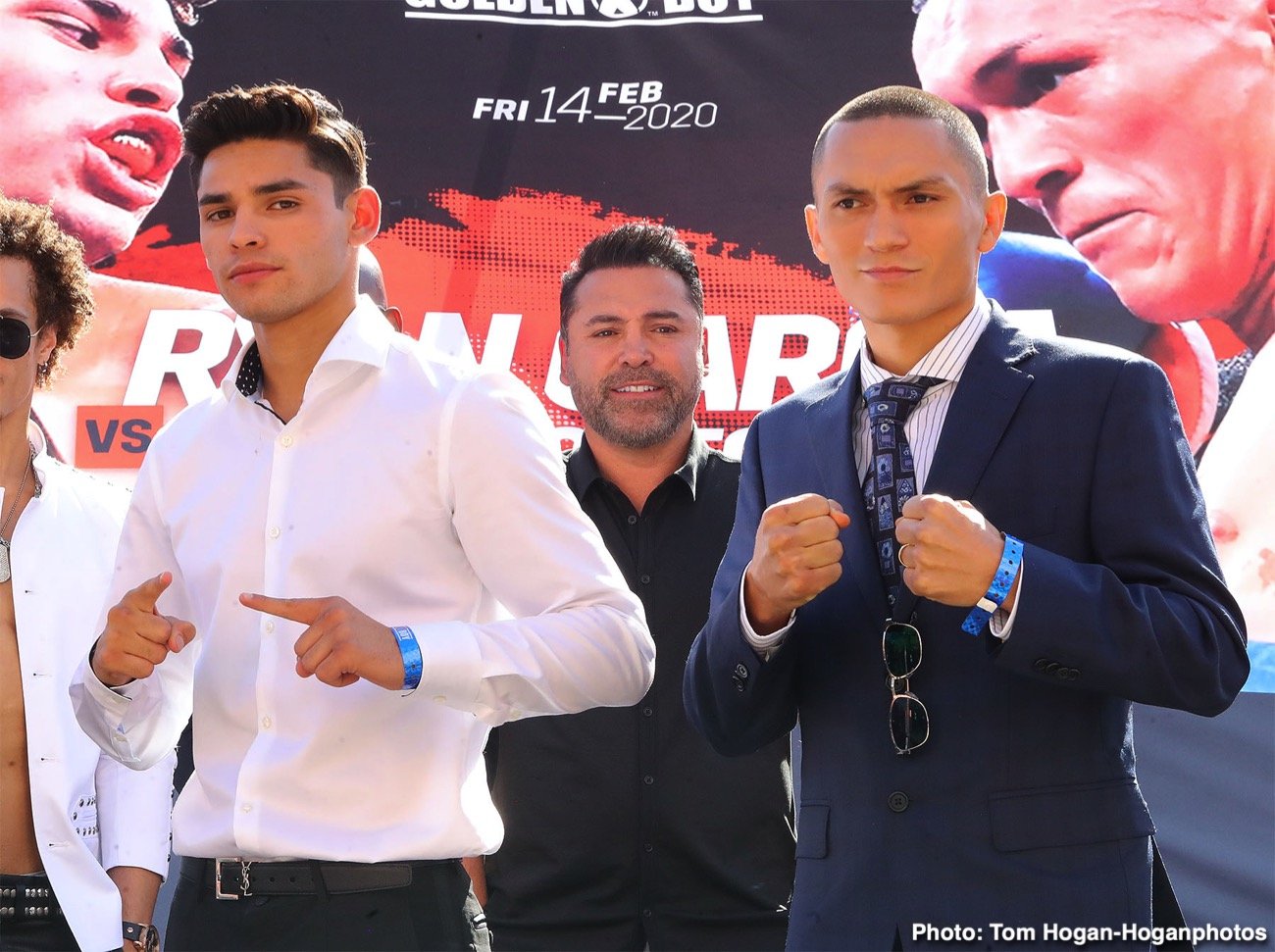 By Aragon Garcia: Oscar De La Hoya says he’s not going to wait to make the Ryan Garcia vs. Gervonta ‘Tank Davis fight. He wants that fight to happen by the end of the year, and he’s going to keep PUSHING Mayweather Promotions to make that happen. They haven’t reached out to him, says De La Hoya on putting the Garcia-Davis fight together.

Oscar thinks Mayweather Promotions are waiting until they see how the unbeaten Ryan Garcia (19-0, 16 KOs) looks this Friday in his fight against Francisco Fonseca (25-2-2, 19 KOs) before they make a decision on letting Tank fight hm.

WBC Silver lightweight champion Garcia, 21, will be facing Fonseca on DAZN at the Honda Center, in Anaheim,California. A win for #4 WBC Garcia will help push him up the rankings.

“We’re all businessmen here, and we can figure it out, and see when the best time is to do this fight,” said De La Hoya on negotiating the Tank Davis vs. Ryan fight with Mayweather Promotions. “Ryan Garcia wants Tank NOw, by the end of the year. He wants him now.

“Let’s see how this pans out on Friday, but I’m going to keep beating the drum, man,” said De La Hoya on him  pushing for Garcia vs. Tank Davis fight. “I’m not going nowhere. And I’m going to beat the drum.

“I’m his promoter, so I’ve got to beat the drum, and get him the fights he wants,” said De La Hoya about making a fight between Ryan Garcia and Gervonta.

Tank Davis and Mayweather Promotions got to make the move to fight Ryan soon. It won’t be long before Tank, 25, eats his way out of the 135-lb division, and there’ll be no point in Ryan fighting him. Once Davis can no longer make 135, then he’ll need to try and make the best of things at 140 or 147, whichever of those two weight classes he ends up in.

Tank Davis didn’t look good in his fights with Yuriorkis Gamboa and Fonseca. If Ryan shines on Friday, and does a better job beating Fonseca then Tank did, it’s going to create a lot of pressure on him.

De La Hoya fine with getting an indirect win over Mayweather

“There you go. It’s pretty good, right? Let’s do it indirectly,” said De La Hoya about Ryan beating Tank Davis would be revenge against Mayweather for not giving Oscar a rematch. “It’s good for boxing, you know?” said De La Hoya.

De Hoya always wanted a rematch with Floyd Mayweather Jr. after losing a close 12 round decision to him in 2007, but he never got one. If Ryan can beat Tank Davis, then De La Hoya would get his revenge against Mayweather through him. Oscar is fine with that. He doesn’t care that it’s second hand.

“This a different game plan,” said Ryan Garcia to villainfy media on his fight against Fonseca on Friday. “This guy isn’t going to come forward. He’s going to back up, because he’s not strong enough to take it to me. So you’ll see me fighting more forward this fight. Not so much boxer-puncher, but more aggressive.

“See, it’s on course now. It’s like a train,” said Ryan when asked about his thoughts on Gervonta accepting De La Hoya’s challenge for the fight with him. “It’s on course for the destination, and I want that fight. I think it’s going to get it this year.

In looking at Fonseca’s fight against Gervonta in 2017, he was coming forward the entire fight, pressuring Tank. Fonseca was getting hit with some monstrous uppercuts from Davis, but he just kept coming forward and working. When Davis would rest, Fonseca would take advantage of it by hitting him with shots.

Davis got hit a lot when he was resting, and made the fight closer than it should have been. In the 8th, Davis finally got Fonseca out of there.

“It’s a good fight,” said Garcia about him and Gervonta. “I think a lot of people are going to have me as an underdog, but I think with my discipline, and my commitment to my honest dedication to winning that fight, I’m winning. You never know with me.

“I don’t even expect with myself to knock him out that quick,” said Garcia when told that his dad is predicting he’ll stop Fonseca by the 4th round. “And I just throw my punches like any normal day in the gym, like that shot I hit [Romero] Duno with. I didn’t even know I was going to knock him out.

“I just threw it, and I clipped him and he was gone,” said Ryan on his stoppage win over Duno.

The knockout for Ryan over Duno was from a fast shot that he didn’t see coming. Garcia didn’t load up with it, but he didn’t need to. Duno never saw the punch, and was taken out.

Ryan training alongside Canelo with Reynoso

“I just give it my all, and go 100 percent. When I run, I beat everybody when I’m running,” said Ryan in training camp. “That’s kind of like my mentality. Whatever I do, I try to win. I’m just glad to see everybody here. They’re here to promote my fight, and support my journey.

“Why would I want a regular job? That would be horrible. That’s not a knock on a regular job. Everybody has got their ways, but I can’t. I’m just going to keep grinding,” said Ryan.

Being able to train with Canelo Alvarez is going to help Ryan. It’s too bad he doesn’t speak Spanish, because he would get a lot more out of working with Eddy Reynoso if he knew how to communicate with him.

Feigenbutz Fires Warning: No Boxer Is Unbeatable Including Caleb Plant! »