By Aragon Garcia: Andy Ruiz’s former trainer Manny Robles says he sees Andy beating Luis Ortiz if he comes into their fight at “100%” condition for their rumored fight in the summer. It’s going to come down to how badly former IBF/WBA/WBO heavyweight champion Ruiz Jr. (33-2, 22 KOs) wants it, says Robles.

Ortiz (31-2, 26 KOs) is a dangerous opponent for Ruiz, especially with the way the talented Cuban looked in his last fight against Deontay Wilder.

The Ruiz Jr. vs. Ortiz fight hasn’t been announced yet, but many fans believe the two will be facing each other next. It’s a fight that could bring Ruiz Jr. all the way back to where he was before he lost his three titles. This is also a fight that could wreck the 30-year-old Ruiz’s career. Another bad loss for Ruiz Jr. and it could finish him as a top tier heavyweight. Ortiz will be turning 41 on March 29, although some fans believe his age is closer to 50.

As fans know, Ruiz failed to train for his rematch with Anthony Joshua last December, and he subsequently lost by a 12 round unanimous decision. The defeat by Ruiz hurt his boxing career.

Had Ruiz won that fight, he could have commanded a huge purse split against Joshua in a trilogy fight. The contract that Ruiz had for his rematch with Joshua last December was heavily tilted in AJ’s favor.

“It’s up to Andy, as I’ve said time and time again,” said Ruiz’s former trainer Robles to Fighthype on an Andy vs. Ortiz fight. “I think it’s up to Andy on who shows up on the night of the fight. Andy has got to want it. I’ve said it, he’s a great fighter, and I’ve said it before when he beat Joshua for the first time.

“He’s got unbelievable skills,” Robles said of Ruiz Jr. “He’s got a chin, he’s got power, he’s got great boxing ability, and great ring generalship. But he’s got to want to get in there and train and get ready for the fight, you know? I mean, I don’t know what else to say, but definitely, if he shows up at 100 percent, I see Ruiz winning the fight,” said Robles on the Ruiz-Ortiz match.

In a training video posted by Ruiz Jr. on his Instagram site, he looks like he’s getting his weight down. Andy is not as heavy as he looked in his recent loss to Joshua on December 7 in Saudi. However, we’ll have to see if Ruiz can maintain his conditioning since he’s capable of putting on a lot of weight in a short period of time.

Ortiz has only lost to Deontay during his 10-year pro career. Apart from those defeats, all of his fights have been one-sided affairs with Ortiz dominating his opposition. Even in Ortiz’s matches against Wilder, he was getting the better of him most of the time. 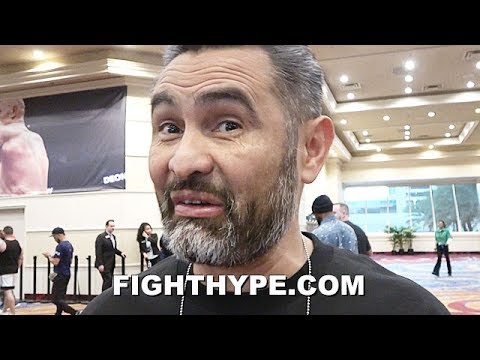 
« Golovkin injured, title defense to be delayed until May or June

Wilder expects to weigh 230lbs and Fury 270 for rematch »