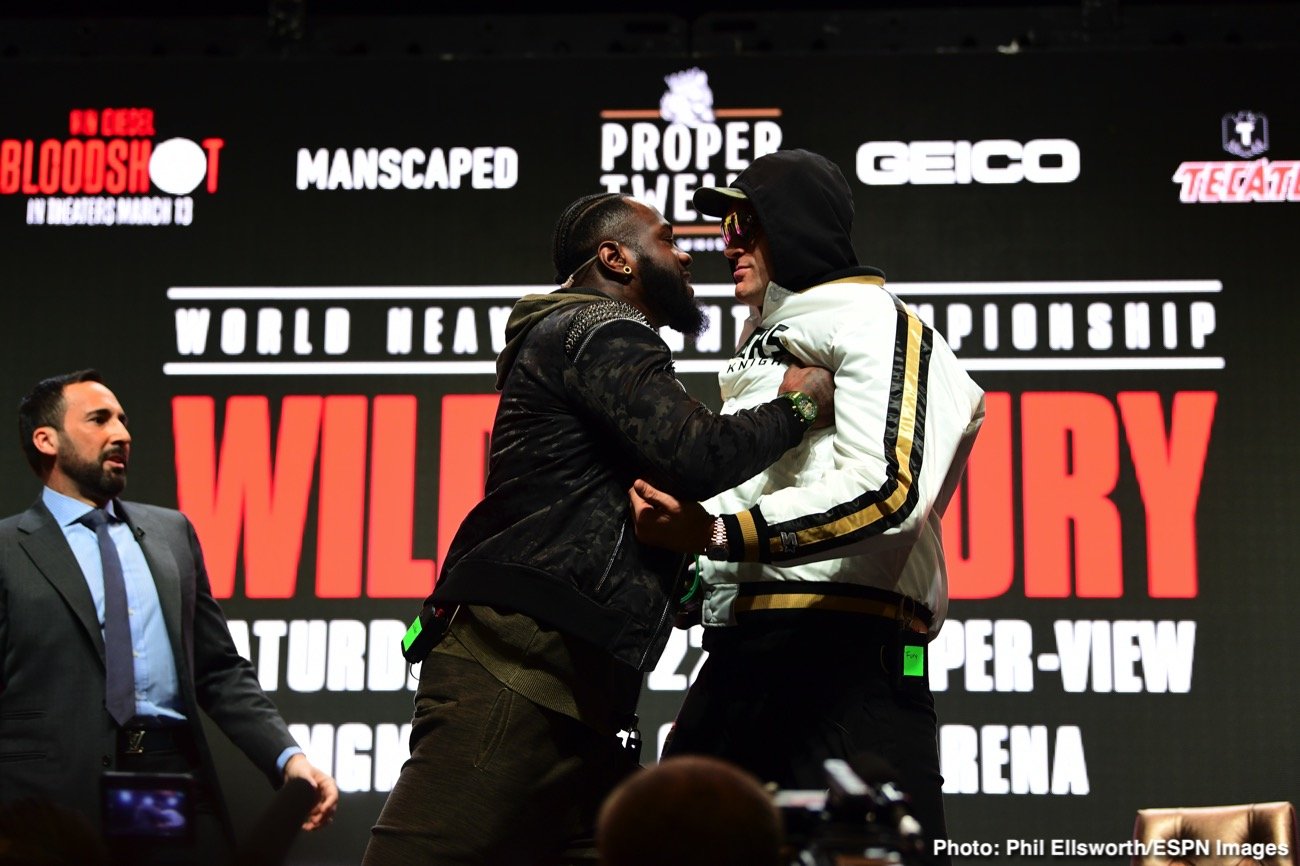 By Mark Eisner: In a predictable move, the Nevada State Athletic Commission has chosen to ban the final face-off between Deontay Wilder and Tyson Fury after the weigh-in this Friday ahead of their rematch this Saturday night.

Fury’s promoter Bob Arum of Top Rank has no problems with the NSAC’s decision to ban the face-off.  The Wilder-Fury 2 weigh-in will be taking place this Friday at 6:00 p.m. ET in Las Vegas.

The rationale for the Nevada Commission’s decision to ban the face-off at the weigh-in is easy to understand.  Wilder and Fury were shoving each other around the stage during Wednesday’s final news conference, and security was forced to separate the two.

Nevada Commission’s decision for the good of the sport

Unlike normal shoving matches between fighters, which appear staged, Wilder and Fury didn’t look as if they were faking. Wilder was upset at some comments Fury had made about him and chose to let him know about it by shoving him when the two got close.

The move by the Nevada Commission will help ensure there are no injuries that occur on Friday after the weigh-in, which is when Wilder and Fury were to have their final face-off. Given the back and forth shoving that took place on Wednesday between the two giant heavyweights, it was almost a sure thing there would be a repeat.

“The reason the decision was made, on behalf of the commission, is because the press conference spoke for itself,” NSAC executive director Bob Bennett said ESPN.com. “The actions of the two fighters pushing each other, which was not staged, is not indicative of the image of our sport as a major league sport, thus having a faceoff is not in the best interest in the health and safety of the fighters, the public and the event,” Bennett said.

Arum agrees with the Nevada Commissions’ decision to ban the face-off between Wilder and Fury. He doesn’t believe that the final face-off between the two unbeaten heavyweights won’t have an impact on the marketing of the fight.

Fans want to see Wilder (42-0-1, 41 KOs) and Fury (29-0-1, 20 KOs) battle it out on Saturday and the final face-off is meaningless. By this point in time, boxing fans have made up their minds on whether they want to watch the fight or not.

With ESPN and FOX both showing the Wilder-Fury 2 fight on pay-per-view, the fighters need to clean up their act. Ideally, it would be great for the sport for all press conferences and weigh-ins to have a set standard of behavior expected from the participants. How to enforce that is the major question.

For boxing to be seen in the same light as other sports like MLB, NBA, and NFL, the athletes need to conduct themselves in a professional manner during press conferences and at the weigh-ins.

Besides the shoving incident between Wilder and Fury last Wednesday, the way that the two were speaking at times crossing the line in sounding vulgar. When you realize that women and young children also watch the news conferences, it gives a bad impression on the sport of boxing.

Wilder and Fury will be fighting this Saturday night at the MGM Grand in Las Vegas, Nevada. The action kicks off beginning at 9:00 p.m. ET. on Fox Sports pay-per-view and ESPN pay-per-view.


« Carlos Takam ready for Maldonado on Feb.28, live on FITE