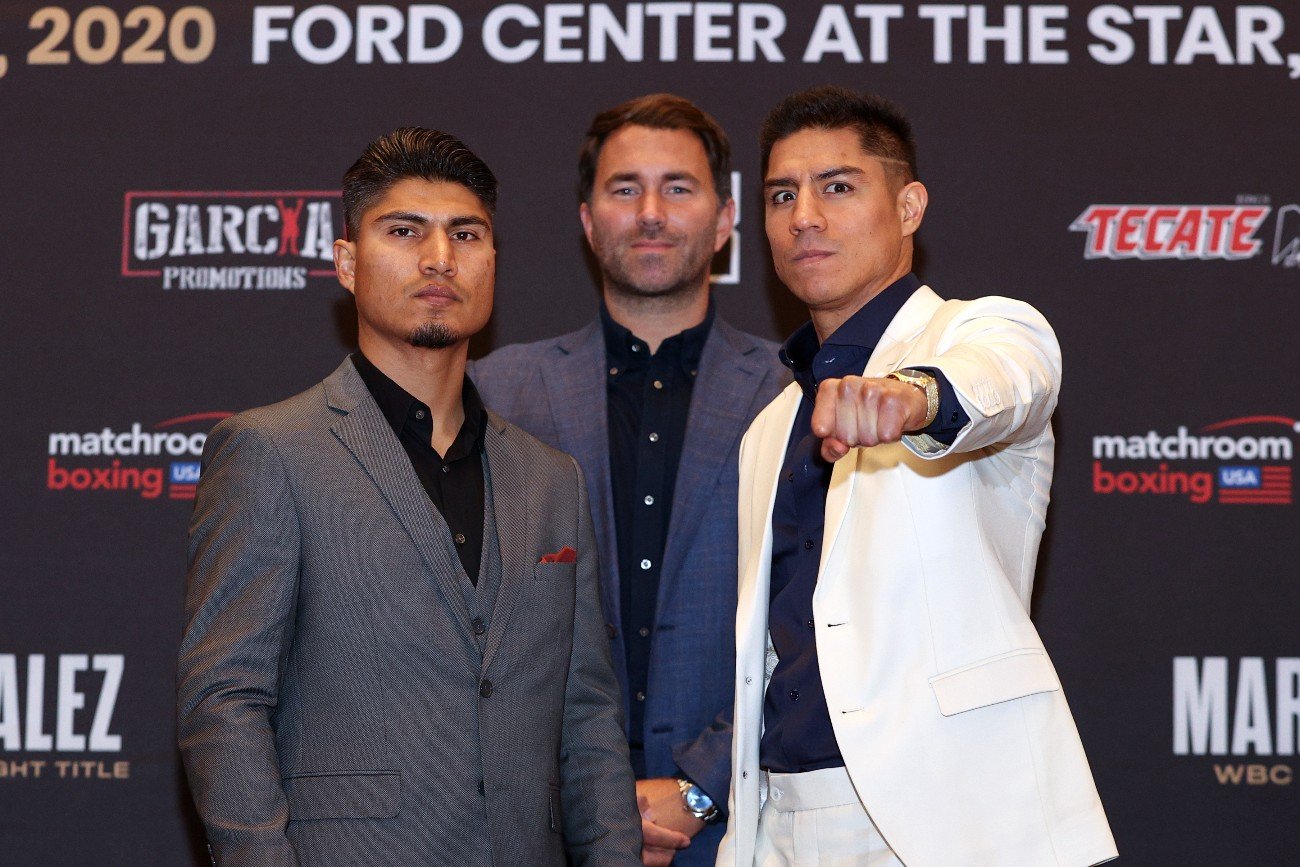 By Dan Ambrose: Mikey Garcia (39-1, 30 KOs) needs to make sure he beats Jessie Vargas (29-2-2, 11 KOs) this Saturday night to try and get the Manny Pacquiao. He’s one of the reasons why Mikey has chosen to remain at 147 following his loss to Errol Spence Jr. last March.

Fans and the media have called for Mikey, 32, to move back down in weight to 140 or 135, but he’s staying at 147 at least for now. If Mikey can beat Vargas, who he personally picked out, then he’s got a shot at getting a title shot against WBA welterweight champion Pacquiao (62-7-2, 39 KOs) in July in Saudi.

The title is likely less important for Mikey than him simply getting the fight – and the payday – against a huge star of the sport in 40-year-old Pacquiao. But before Mikey can share the ring against the famous Filipino superstar, he’s got to beat the hulking 5’11” junior middleweight Vargas, which won’t be easy.

Vargas is clearly not one of the A-level fighters at 154, but he’s a contender in that weight class. We haven’t seen Vargas tested against any of the junior middleweights yet because he’s been inactive, and enjoying life outside of the ring.

Mikey explains why he chose Vargas to fight

“Originally we looked at the 140-lb division, but the opponents that we wanted weren’t available,” said Garcia to secondsout in explaining WHY he picked Vargas. “We then looked at 147, and I eliminated some of the names because they weren’t exciting enough. They weren’t what I wanted. Jessie, I think, fits perfectly.

“He’s a solid opponent, a solid contender, and a former welterweight world champion,” Garcia said of Vargas. “I think he has all the elements for me to prove myself, and prove to everybody that I can be a contender at welterweight. Things could change after this fight. Whether I could return to 140 or stay at 147 is yet to be determined.

“I think everybody’s opinions are going to change after Saturday night once they see me perform,” said Mikey in saying that boxing fans will change their mind about him not being BIG enough to fight at 147. “In my last fight [against Errol Spence Jr.], I couldn’t do anything.

“I felt slow, tired, weak, and it was just not my night and I felt off, and Spence fought well. He fought very well, and he came in to do what he had to do. He outboxed me all night, and I also fought the best guy in the division,” said Mikey about his lopsided defeat against Spence.

With Mikey signing a one-fight deal with Matchroom Boxing, it put him in a situation where it made sense for him to fight Vargas because he’s with them. There are a lot of welterweights that are arguably better than Vargas, but they’re not with DAZN. Additionally, they would be risky for Mikey fight.

We’re talking about guys like Vergil Ortiz Jr., Keith Thurman, Yordenis Ugas, Danny Garcia and Shawn Porter. Mikey would be the underdog against virtually all those guys.

Garcia doesn’t like fans making quick judgments about him

“I don’t see how people are quick to make statements like that, but that’s alright. That’s just one performance,” said Garcia about boxing fans writing him off as a serious contender at 147 after his loss to Spence.

“That’s OK because that’s why I need this fight to prove to everybody there’s a lot more that Mikey Garcia can accomplish even at welterweight. If that fight is offered to me, then I’m definitely going to explore it deeply and try to secure a fight with Manny,” said Mikey when asked if he’ll try and set-up a fight against Pacquiao next if he beats Vargas on Saturday.

“It’s a fight that we’ve been wanting for several years now.  There’s been a lot of conversations about a possible fight between Manny and myself. If this fight on Saturday night opens the door to achieving that fight and accomplishing that fight, then I’m definitely going to take that,” said Mikey.

Boxing fans saw how completely ill-equipped Mikey looked against Spence last year, so they don’t view him as having the right size for the weight class. Spence usually doesn’t win his fights without getting out of first gear, but against Mikey, he coasted the whole fight. It was like watching Floyd Mayweather’s win over Conor McGregor. Mayweather was in first gear for almost the entire contest. It was a boring fight.

Vargas isn’t a top welterweight, but he’s probably still good enough to beat Mikey if he doesn’t run out of gas.

Mikey wants to negotiate a fight with Pacquiao

“So yeah, part of the reason why I’m at 147 is that there are bigger fights at 147 that I can get into, but I’m not ruling out coming back down to 140,” said Mikey. “I’ll be flexible, and whatever is available to me that makes sense to me, I’ll take. We talked months ago, but lately, I’ve been concentrating on this fight, so I’ve not had direct conversations with Team Pacquiao.

“Maybe after this fight, we can sit down or have some discussions about a possible fight between him [Pacquiao] and me,” Mikey said. “That’s great,” said Mikey when asked about his thoughts on lightweight champion Devin Haney calling him out. “That’s the type of mindset that a champion should have that mentality and is willing to take on all the challenges.

“He needs big names, he needs big fights to prove to everybody that he’s a big star,” Mikey said of Haney. “Not only on social media but in boxing and accom[lishing things inside the ring. I totally agree with him with the things he wants, and I’m here to entertain those offers.

“If he’s trying to challenge myself or anybody else, I’ll entertain it. I’ll sit down and discuss it, and it if’s a fight that makes sense for him and myself, then let’s discuss it and get it done,” said Garcia.

There’s going to be a lot of pressure on Mikey on Saturday to produce a win, and look good in doing so against Vargas. It’s not just Mikey that will be trying to get the Pacquiao fight. Vargas obviously wants that fight too, and if he can beat Mikey, he’s got a chance of getting it.

“It was a big surprise. I was surprised,” said Garcia when asked about Tyson Fury’s upset 7th round knockout win over Deontay Wilder. “And I didn’t expect Fury to come out as strong and as dominant early on. I thought it would be the other way around, and I always thought that Wilder would come on early and hurt Fury, and keep that strength on top of him. But Fury came with a game plan.

“He really put Wilder in trouble early on, and Wilder didn’t have an answer. He was never able to respond well. So congratulations to Fury. I think Wilder will be able to come back. It might have been a night where he was hurt or something happened early on. That punch probably rocked his balance.

“You know with that punch behind the head or the ear. All these things could be factors that played an effect on how the fight played out. I would like to see the third match. I would definitely want to see it, and I think people would want to see it too,” said Mikey.

Wilder and Fury will be fighting again in a trilogy match in 2020 in the U.S. It looked like Wilder never recovered from getting hit with a rabbit punch by Fury in round 3. Fury was landing a lot of shots in the back of Wilder’s head during the fight.

Percentage-wise, it looked like at least one-quarter of the shots Fury landed in the fight were to the back of Wilder’s heat from this writer saw. Wilder looked disoriented from the steady flow of illegal rabbit punches Fury was braining him with. The referee was on duty but kind of asleep at the wheel unfortunately for Wilder.

Garcia vs. Vargas & Yafai vs. Chocolatito quotes for Saturday on DAZN »