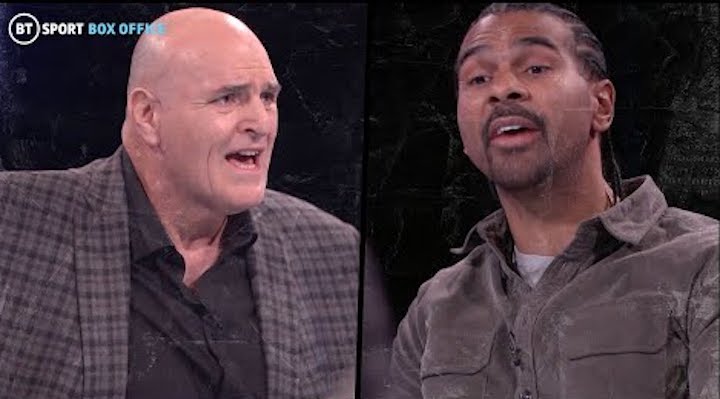 By Scott Gilfoid: Tyson Fury’s dad John Fury got worked up on Thursday in arguing with David Haye on his belief that Deontay Wilder “CRACKS” under pressure. At one point, John asked Haye if he wanted to bet on the Wilder-Fury 2 fight, at which point he let him know that he doesn’t bet.

John and former two division world champion Haye were part of the BT Sport Boxing channel that were discussing the upcoming February 22 rematch between Deontay and Fury.

Haye tried to calmly reason with John by letting him know that WBC heavyweight champion Wilder (42-0-1, 41 KOs) has never shown a sign in having cracked during his career, but John was having none of it. He continued to belabor the point, sounding as if he was trying to convince himself.

When John got to the point where he was worked up emotionally, Haye seemed to back off and let him drone on. John says Fury shouldn’t have been out there in the first fight with Wilder, because he was out of shape and “weak as a kitten.” It sounded like John was giving an excuse for Fury’s poor performance against Wilder.

Wilder will crack under the pressure

John Fury: “When you put all those statistics together, what do you come out with? A man when he’s pressured and he’s having a hard time, he’ll crack at the seams,” said John Fury to BT Sport Boxing on his belief that Wilder will crumble mentally against Fury in the rematch. “Once he cracks, the crack will spread from Manchester and back, and it’s over.

John Fury: “I can see that but he hasn’t fought anybody. Tyson, let me tell you. Do you know Lennox Lewis, Mike Tyson, Evander Holyfield, Riddick Bowe? They’d have done my son a year ago in 2 rounds. You know I’m saying it because it’s true. He shouldn’t have been in there. You put your finger in his body like a lot of tissue paper. All saggy skin like a blown up balloon.

“I was in better shape. He was as weak as a kitten, but his self-belief. He said, ‘My self-belief and my determination was enough to beat him.’ I know he ain’t got it. But listen, I’ll be the first one to come and say, ‘David, I’m wrong…but I know this time what my son is capable of doing.

“You ain’t seen what he’s capable of doing. I know from being that big, given the platform and given the opportunity when he’s physically and mentally right, he’s unstoppable, Tyson,” said John.

Deontay showed no signs of cracking under the pressure

As you can see, John seems to have his mind made up about Deontay cracking under pressure. Also, the comments John makes about Fury being out of shape for the first Wilder fight. It makes me wonder if he’s going to have some other excuse for Fury if he fails to get the win in the rematch with Wilder.

At some point, you’ve got to admit when a fighter isn’t good enough to win. You hate to say it, but Fury wasn’t good enough to beat Wilder, was he? I mean, if you beat someone in a game of checkers, and they start blabbering about them having a headache. Are you supposed to not count the win? It would be good for John just to acknowledge that Wilder did a great job of knocking Fury out cold in the 12th, and leave it at that.