Hopkins hoping for Ryan Garcia vs. Tank Davis in 2020

By Chris Williams: Ryan Garcia could wind up facing Gervonta ‘Tank’ Davis in 2020 if Bernard Hopkins of Golden Boy Promotions has his way. Hopkins believes that the highly ranked 21-year-old Garcia (19-0, 16 KOs) is ready to face WBA ‘regular’ lightweight champion Tank Davis (23-0, 22 KOs) in 2020 for the first of 2 fights.

Ryan says he wants Gervonta this year, but his promoters at Golden Boy will make the decision. But if Garcia wants to win a world title in 2020, there are no easy options. If Ryan wants a belt this year, he’s got to tangle with these champions:

Hopkins maintains that the 25-year-old Gervonta isn’t improving, and he feels that Ryan is the one that is getting better. According to Hopkins, when a fighter fails to improve, they stay around for long. The younger fighters watch them, and pick them off.

While Hopkins feels Ryan Garcia is ready for Tank, a lot of fans feel that he needs more seasoning. Tank Davis is 4 years older than Ryan, and he’s had a number of fights against quality fighters during his 7-year pro career. In contrast, Garcia has yet to be tested during his 4-year career.

To say that Ryan is trailing Tank Davis in terms of development is an understatement. Davis is far advanced, and has been a world champion since 2017. Tank was 22 when he first captured his first title.

“In 2020, somewhere around that range. I think he’s ready,” said Hopkins about Ryan. “We’ll be ready to test the waters. I’m not looking at the age, and I’m not looking at who’s stronger and all that. I think that’s got to be looked at from the trainer’s point of view, but I look at the whole scientific reason.

“Also skillswise where Ryan is as a young man, and is confident,” Hopkins said in rating Garcia high. “He’s getting better. Tank is who he is, and is always plodding forward doing what he got to do to win, and I respect Tank. But I don’t see him getting better. See, when you don’t get better, those young guys are watching.

“It’s only a matter of time if you haven’t gotten better, you won’t stay around long,” said Hopkins. “That would be a good 2-fight segment. I’d like to see two fights with that. Ryan wins the first one, and the second one they do it again and it would be all hell,” said Hopkins.

It would be a good idea for Golden Boy to give Garcia a couple of more fights against good fighters before they make a fight with Tank Davis. Garcia is fighting this month on February 14 against Francisco Fonseca. That guy isn’t good enough to get Ryan ready for a fight with Davis.

Gervonta has fought a lot of good guys says Mosley

“Right now, Gervonta Davis is very strong and fast,” said Shane Mosley to Little Giant Boxing. “Ryan Garcia is great, fast, and a good look for boxing. Ryan Garcia wants to fight Tank? That’s a good fight. I think Ryan Garcia is a little bit faster, but Tank to me seems a little bit more grittier and I like the grit.

“Even though I do like Ryan Garcia the way he fights,” said Mosley. “Tank is gritty and strong, and I’m not sure how much Ryan Garcia can tank. I know that he’s a great fighter. But can he take what he dishes out? That’s the difference. I think with Tank, he fought a lot of good guys that can actually throw back. And hit him, and he’s probably been hit a lot by bigger guys.

“So that’s going to be an excellent fight,” said Mosley on the Tank Davis vs. Ryan Garcia fight. “It’s important for you to be tough, because it’s not amateur fighting anymore. It’s not three rounds. You can’t just go and throw a whole bunch of punches and get out of there. You have to fight the whole fight, 12 rounds.” said Mosley.

Gervonta has been in with some good fighters, but not a whole punch. These are the guys Tank has fought;

Those are good fighters, but not great, and there’s not a lot of difference from Garcia’s opposition. Nevertheless, it would be a good idea for Ryan to get more experience before he faces Tank Davis.

Mosley: You’ve got to be able to take punishment

“Sometimes it gets nasty, and you’ve got to get out of your comfort zone,” said Mosley. “You can’t just be flashy throwing shots. You’ve got to be able to take it, because if you get hit with a lot of shots in the 4th round, and the 8th round comes. Now what do you do? How do you get around it? 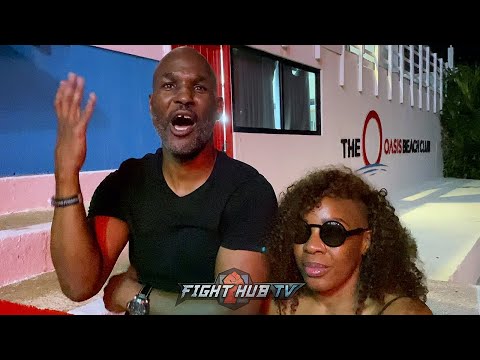 All these guys are great. With Ryan, you just have to see how tough he is, but a great fighter,” said Mosley. “He looks good, and very fast. Teofimo Lopez, I haven’t seen a lot of him yet. I know he wants to fight Vasiliy Lomachenko, which will be a very hard fight.

“Devin Haney is the youngest of all of them, and I think he’s got a promising future,” Mosley continued. “He’s long, and he’s got good, strong punches. We still have to see how tough he is. That’s the main thing with a lot of young fighters. They’re very fast.” Mosley added.

What we don’t know is how well Ryan can take a shot without getting hurt. Every fighter can be knocked out, but they’ve got to possess defense to limit the shots they take. With Ryan’s trainer Eddy Reynoso, he’s going to be teaching him to be smart inside the ring so he doesn’t get beaten up.

Brook vs. DeLuca undercard update for Februay 8 in Sheffield, UK »