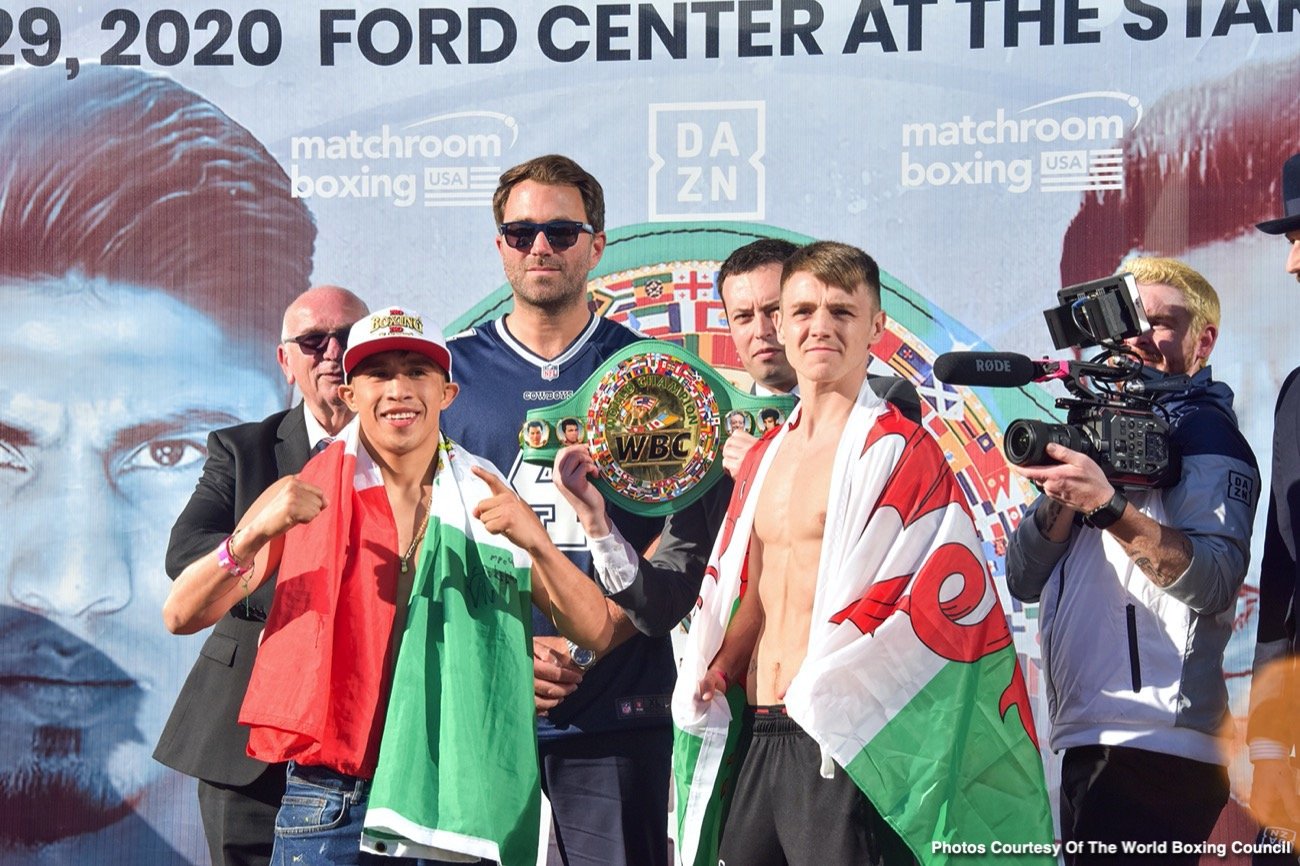 By Sean Jones: Mikey Garcia, Kal Yafai, and Julio Cesar Martinez are all expected to win tonight in their individual fights on DAZN at The Star in Frisco, Texas. These are the A-side fighters with Matchroom. Former WBO heavyweight champion Joseph Parker is also on the card in a 10 round tune-up fight against Shawndell Winters.

WBA super-flyweight champion Kal Yafai (26-0, 15 KOs) takes on boxing great Roman ‘Chocolatito’ Gonzalez (48-2, 40 KOs) on the undercard in the co-feature. This fight has a chance of being a fun one as long as Yafai resists the urge to get on his bike pedal away from Gonzalez to keep from being pressured.

That’s Yafai’s style fighting when he’s facing opposition, but he’s not done a lot of that during his career. He’s been in with one good fighter is Israel Gonzalez, and won a controversial decision. Yafai has a pronounced size advantage over Chocolatito, and that should be enough for him to win. What the boxing fans can hope for here is an exciting fight, as long Yafai doesn’t play keep away all night.

If Yafai chooses to stay on the move all night, he’ll likely end up being booed by the Texas fans, who prefer to see action. Yafai wants to be cheered by the fans tonight, but the only way that happens is if he chooses to fight Roman, and not run from him. The risk for Yafai of slugging with Gonzalez is he’s not as talented as him in that type of fighting, and he could get knocked out. Yafai will surely lose if he trades with Gonzalez the entire contest.

Has Yafai’s promoter kept him away from the best?

Kal is an excellent fighter but his promoter Eddie Hearn has steered him away from the talented guys at super flyweight his entire career instead of putting him in with the best. Yafai and Hearn weren’t chomping at the bit to fight Roman Gonzalez 4 years ago when he was in his prime. Only know when he’s 32, shop worn and on his way out of the game that they’ve decided to set up a fight

Hearn never matched Yafai against any of these fighters:

Yafai will choose to outbox Chocolatito and will win a dull 12 round decision. Those likely won’t be the type of performance that will excite the U.S fans about Yafai, because they’ll have been put off by his risk-averse fighting style.

Yafai said it himself this week that he just wants Gonzalez’s name on his resume. A win is a win in other words. Let’s just hope that Yafai comes to fight a war tonight and not play it safe.

WBC flyweight champion Julio Cesar Martinez (15-1, 12 KOs) is defending against Jay Harris (17-0, 9 KOs). Of all the fighters on the card, the 25-year-old Martinez has the best chance of stealing the spotlight from the Garcia vs. Vargas main attraction. What could prevent Martinez from taking the limelight is his opponent lacking enough talent for him to show off all his skills.

On paper, the British fighter is so overmatched that he crumbles immediately in the same way that former WBC 112-lb champion Charlie Edwards fell apart in his fight against Martinez last August. The fight ruled a no-decision because Martinez hit Edwards with a hard shot after he was down in the third.

After receiving that blow, Edwards was in no condition to get back up. His chances of survival in the round were minimal if he had gotten back up. In fact, it’s likely wouldn’t have lasted another 10 seconds if he was still capable of fighting after the knockdown.

Harris is perhaps too weak of an opponent for Martinez to steal the show tonight from the main event fighters. If Martinez makes it look too easy, which is a strong possibility, fans will devalue his accomplishment by saying that Harris looked like a poor gimme-level opponent.

Martinez will win by a 4th round knockout. Harris will make it easy by electing to slug with Martinez, and he won’t last long fighting like that. The fight could end a lot earlier depending on how much punishment Harris can take from Martinez.

NEWS:   Mikey Garcia returns to the ring against Sandor Martin

Mikey and Vargas will be fighting for the WBC Diamond welterweight title tonight. Garcia is a 4-1 favorite to beat Vargas with the odds-makers, which suggests they don’t see Jessie as having the talent to win. What makes it hard to pick Vargas is he hasn’t faced a serious opponent in two years since his 12 round draw against Thomas Dulorme.

Vargas would likely be the favorite if he was an active welterweight, and if he’d shown that he can still beat top-level fighters in the division. The last time Vargas beat a top 15 welterweight was 4 years ago when he defeated Sadam Ali by a 9th round TKO in 2016.

Going 4 years between significant wins is a red flag that tells you that this fighter has flaws, and isn’t among the best in that weight class. You can argue that’s one of the main reasons why Mikey chose to fight Vargas.

Mikey was offered a fight against Regis Prograis, but he chose Vargas instead. Prograis is still in his prime and came close to beating Josh Taylor in his last fight. The odds-makers likely would have had Mikey the underdog in a fight against Prograis. It was smart for Mikey not to pick him as an opponent.

Vargas failed to beat Thomas Dulorme, who is a gatekeeper level fighter at 147 in fighting to a draw against him. Before that, Vargas fought Adrien Broner to a 12 round draw. Those performances tell you a lot about Vargas’ pedigree or lack thereof. Vargas is a good fighter, but he fails when he’s stepped up against A and B-level fighters.

In the past, Vargas could occasionally beat a B-level guy, but they were generally close affairs with him fights that could have gone either way. For example, Vargas’s wins over Anton Novikov and Khabib Allakhverdiev were both controversial. Many boxing fans thought Novikov and Allakhverdiev did enough to get the nod of Vargas. Those are examples of Vargas struggling to beat B-level fighters.

Additionally, Vargas is coming off of a 10-month layoff after beating 38-year-old former two-division world champion Humberto ‘La Zorrita’ Soto by a 6th round TKO on April 26 in a catchweight fight at 150 lbs.

After talking about wanting to move up to junior middleweight for a long period of time, Vargas finally made his debut against the much smaller 5’7″ Soto, who captured world titles many years at super featherweight and lightweight. Soto wasn’t the ideal opponent for a fighter in his prime fighting for the first time at junior middleweight.

Vargas has the size to beat Mikey

Vargas isn’t considered among the best at 147 or 154, but he is a former two-division world champion and he has the convenience of being bigger, taller, stronger and leaner than Mikey. The size might be enough for Vargas, 30, to win tonight. But if the scorecards, Vargas might come up empty unless he really does a number on the 32-year-old Mikey.

If Vargas is able to use his height and reach and box from the outside, he can potentially win tonight. Mikey was too short and weak to do anything against IBF welterweight champion Errol Spence Jr. in his last fight, and he didn’t put in much effort.

Top Rank promoter Bob Arum was highly critical of Mikey afterward in ripping him for his unwillingness to try as hard as he could have to win against Spence. If Vargas can start off fast tonight and hit Mikey with some hard shots in the first few rounds, he could go into a shell, as he did against Spence, and give up. In the majority of the fights that Mikey has won during his career, he’s been the aggressor.

The one exception to that rule before Mikey fought Spence was his match against Orlando Salido in 2013. But in that fight, Mikey bailed after 8 rounds and bowed out after suffering a broken nose. Salido was coming on hard with his pressure, and Mikey looked uncomfortable. Just when Salido was taking over the fight, Mikey’s trainer Robert Garcia pulled him out of the fight due to a broken nose. It was a similar situation to what we saw from Julio Cesar Chavez Jr. with him quitting when he suffered a broken nose against Danny Jacobs last December.

Is Mikey Garcia still too fat?

The slightly flabby look that Mikey showed at Friday’s weigh-in brings up the question of whether he put in the work at the SNAC facility in San Carlos, California. This is the same fat look that Mikey had in his last fight at 147 against Errol Spence Jr. last March, and he lost that one by a lopsided 12 round decision.

During the last 11 months, Mikey put on a lot of weight and no longer resembled the fighter he once was. He looked more like his older brother Robert Garcia, who is stocky and bull-like in appearance. When Mikey first started camp, there were some questions whether he would be able to take all the weight off to get in the type of shape he’ll need to be to defeat a big welterweight like Vargas.

10 weeks should have been enough time to take off all the weight, but his job was made more difficult because he also needed to add muscle. Trying to add muscle while stripping it’s very difficult to do. You need to eat a lot to put on muscle, and Mikey had already been doing the eating part before he began training camp.

Mikey will box his way to a 12 round decision. Vargas is too limited, and he won’t have the ring IQ needed for him to win by a decision.

There’s a lot hanging in the balance for Mikey. If he wins, he’s got a good chance of fighting Manny Pacquiao in July in Saudi Arabia on DAZN. History has shown us when there’s a future big money fight stake, the A-side fighter tends to get the nod in the scoring no matter. That’s why it’s crucial that Vargas either stops Mikey or beats him so convincingly that there’s no chance of controversy.