Deontay Wilder sends message to Andy Ruiz Jr.: ‘Get back in the gym’ 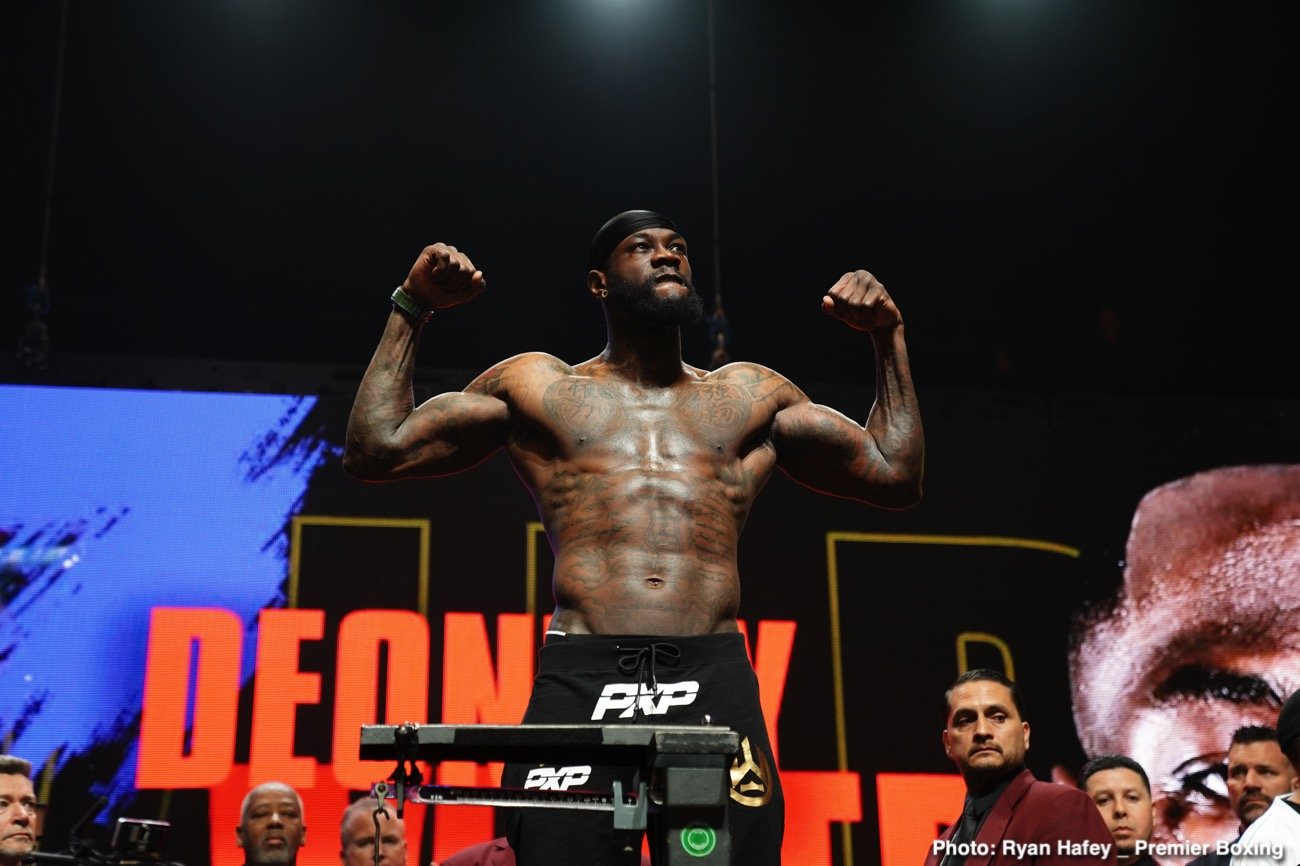 By Dan Ambrose: WBC heavyweight champion Deontay Wilder wants Andy Ruiz Jr. to stop spending all of his money he made from his 2 fights with Anthony Joshua, and get back in the gym to focus on boxing. Wilder says he would like for Ruiz Jr. (33-2, 22 KOs) to be a future opponent for him to defend his WBC title against, but he wants him to get back in shape.

Wilder thinks Ruiz has lost some of the motivation that he once had for boxing since his two fights with Joshua.

Wilder: Ruiz lost some of his hunger for boxing

“Will, I ever give Andy Ruiz a shot? If I run out of opponents eventually, and we’re going to need somebody to beat up on,” said Wilder on social media when asked if he’ll give Ruiz Jr. a title shot. As long as Andy Ruiz stays in shape and comes back to reality because I think after the Joshua fight, he lost some kind of hunger for the sport or whatever,” said Wilder.

Ruiz Jr. lost his three heavyweight titles in a decision loss to Joshua last December, and his reputation is in tatters.

It looked like Ruiz couldn’t handle the sudden overnight success that he got from his first fight with Joshua last June. Ruiz stopped Joshua in the 7th round and got a big $5 million payday, which is nothing compared to what he could have gotten if he’d beaten AJ in the rematch last December.

“When you come from nothing and then you obtain millions, then you start doing things that you could never do in your life,” said Wilder in talking about Ruiz. “I think that took him away from the structure and dedicating himself to boxing. So hopefully he comes back, and I hope he doesn’t come back when the money runs out. Because think about it, small numbers add up to big numbers, and that’s what gets people.

Since Ruiz’s loss to Joshua, he’s bought a lot of expensive cars and a large house. With the high-priced automobiles that Ruiz is buying, there’s some concern that he’ll deplete the money he made from his two fights with Joshua, and end up broke before long. It’s unclear how much of Ruiz’s fortune he’s spent on vehicles since his loss to Joshua last December. Buying a lot of expensive vehicles that depreciate dramatically the moment you drive them off the car lot is clearly a mistake on Ruiz’s part.

Andy needs to work his way back to a title shot

Ruiz could quickly put himself back in a big-money trilogy fight against Joshua if he were to beat some solid TOP heavyweights in the division.  Fighting old journeyman level fighters won’t do the trick for Andy because he’s not only got to interest Joshua and his promoter Eddie Hearn to want to make a third fight, but he needs the boxing public to purchase it on PPV.

Ruiz Jr. needs to get back in the gym – Wilder

“Andy, if you’re listening, get your a– back in the gym, bro,” said Wilder. “S—, that money is going to run out, bro. I’m not going to tell a grown man what to do with their money, but if you’re going to spend it, invest it in something. In properly, in real estate land or whatever. Invest it, and then come on back, man,” said Wilder to Ruiz.

On social media, Ruiz has recently posted showing him working, and looking thinner. That’s a good start. If he’s going to find success in his next fight, he’ll need to drop a ton of weight to get back down to the 250s. He weighed 283 for his December 7th rematch with Joshua, and he was too heavy.

With the game plan that Joshua had, it might not have mattered if Ruiz Jr. had come into the fight in great shape. Joshua, 6’6″, used his height and reach effectively, and he tied Ruiz up when he would come in close. For Ruiz to deal with a style like that, he needs to move his feet faster, and throw sustained 4-6 punch combinations each time he gets near Joshua. He didn’t do that.

When Ruiz would catch up to Joshua, he would throw a single punch, and then get tied up in a clinch. Joshua wouldn’t have been able to grab Ruiz each time if he’d thrown sustained combinations, but it looked like he didn’t want to risk gassing out. Further, at 283, Ruiz was too fat to throw more than one or two punches without needing a rest break, so he was probably happy to have Joshua grabbing him in a clinch.

Ruiz rumored to be fighting Arreola or Ortiz next

Recently there’s been talk of Ruiz returning to the ring in the summer. Luis Ortiz and Chris Arreola are the two fighters that have been mentioned as possible options for Ruiz’s next fight. Initially, it was thought that Ruiz would fight Ortiz next, but now it’s looking like Andy may fight the 38-year-old Arreola (38-6-1, 33 KOs) in his next fight.

If Ruiz beats Arreola, who has lost 2 out of his 4 fights, then he would face the 41-year-old ‘King Kong’ Ortiz. Boxing fans on social media have reacted negatively to the idea of Arreola being Ruiz’s next opponent, but it would be understandable from his point if that’s who he faces next.

Ortiz is the type of fighter that Ruiz Jr. would need pure dedication to his training for him to defeat. Nothing has been decided yet, but it’s looking like Arreola may be the guy Ruiz faces next. Ideally, Ruiz should take the bigger challenge in facing Ortiz next rather than Arreola, because he’ll be better respected by fans. Arreola would have been a good choice for Ruiz a decade ago, but not how. It’s been years since Arreola was a relevant fighter.

The problem with Ruiz facing an old guy like Arreola is the potential of losing to him. Arreola broke a Compu-Box record for punches thrown by a heavyweight in throwing 1125 shots in his 12 round decision loss to Adam Kownacki last August. If Arreola throws that many shots against Ruiz, there’s a good chance he’ll beat him just on sheer work-rate.

If Ruiz is fat and out of shape, Arreola will work him over and embarrass him. There’s a world of difference in Ruiz losing to Joshua compared to him losing to Arreola. He can still come back from a loss to Joshua, and make good money. But if Ruiz loses to Arreola, that could be the end of his career as a top-level fighter. Ortiz would be a better opponent for Ruiz because it won’t look nearly as bad if he gets beaten by the talented Cuban compared to losing to Arreola.

Anthony Joshua: Wilder can be beaten if you avoid his right hand »