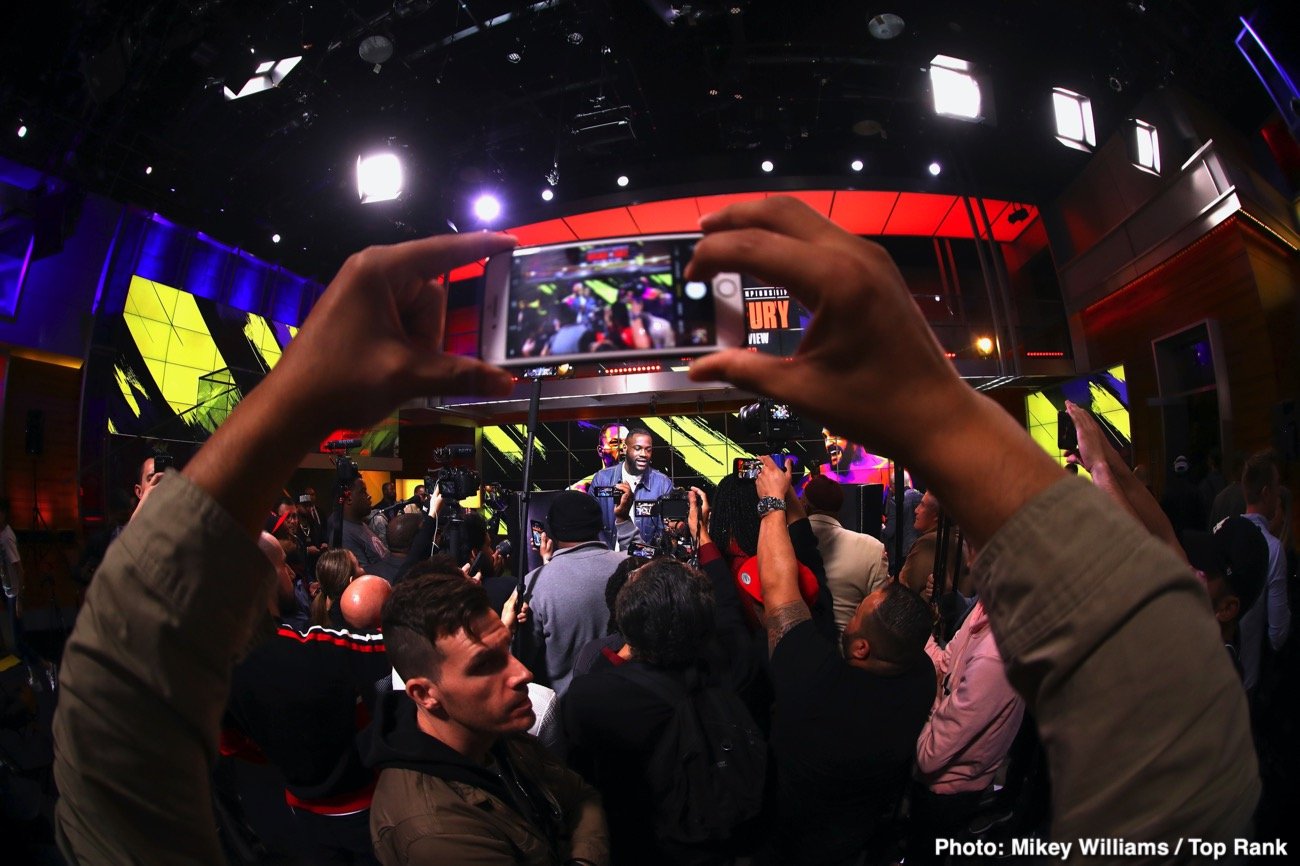 By Scott Gilfoid: Deontay Wilder wasn’t impressed with Tyson Fury posting a  picture of himself last week saying that he’s “solid as a rock” at 270 pounds, and coming for him. Wilder sees this sudden weight gain from Fury (29-0-1, 20 KOs) as further fuel for the excuses that he’ll be telling fans after he gets knocked out on February 22.

Wilder thinks that Fury is packing on muscle in hopes that it’ll enable him to handle his power better. If Fury is weighing 270, that’s not going to make much of a difference from the 256 that he weighed for the first fight. If things do go wrong for Fury with him getting knocked out, he can always blame it on his added weight, according to Wilder.

Fury, 31, is supposed to be trimming down from the 256 lbs he weighed for his first fight with Wilder in December 2018. The argument for why Fury ran out of gas in the championship rounds was based on him being too heavy. But now all of a sudden Fury is packing on the weight, and is looking bulked up.

The recent pictures of Fury clearly show the new muscle mass that he’s put on for this fight. Tyson looks considerably bigger in terms of his muscles than in his previous fight with Wilder or any other fight during his 12-year professional career.

With all the added muscle that Fury has put on lately, he’s starting to look a little top heavy. Obviously, that can’t be good for Fury’s stamina, since his heart is going to have to work extra hard to deal with all that extra mass.

The other thing excuse that WBC heavyweight champion Wilder (42-0-1, 41 KOs) doesn’t want to hear is about Fury not being the same without his old trainer Ben Davison, who he replaced with Sugar Hill Steward recently in preparation for this fight.

Fury setting himself up for an EXCUSE after loses – Wilder

“A lot of the stuff he’s doing, it makes me think he’s setting up an excuse for when he loses,” said Wilder to ThaBoxingvoice on Fury. “The weight, and him being out of shape, and didn’t have enough time to get in shape. All these trainers. I don’t want to hear when I knock him out, ‘If he had Ben [Davison], it would have been better,’ and all that.

“I don’t want to hear everything that’s been around is built on the excuses,” said Wilder. “We’ll see what happens. If he feels he’s going to be bigger, then okay. Maybe he feels him being bigger will allow him to take a punch. A lot of people put a lot of theories in their head, feeling like if it’s a certain way, it won’t happen.

“I showed him an example of when he’s smaller, and I’m going to show an example when he’s bigger,” said Wilder about him knocking Fury out last time. “But I personally don’t have to show him.

You’d like to think that Fury would just give Wilder credit if he gets blasted out without making excuses, but coming events cast their shadows before. Fury had excuses in the past in terms of him being heavier than he wanted to be for the fight. The general belief that Fury didn’t have enough time to burn off all the weight that he’d packed on during his 2 ½ years out of the ring.

“I don’t either,” said Wilder in agreeing that Fury’s new trainer Sugar Hill Steward won’t change anything. “It’s similar to the Breazeale camp when he had Vergil. When you have bad habits, it’s hard to correct bad habits. Sometimes it takes years. It takes even longer when you ain’t worked with that person.

Fury facing an uphill climb in trying to improve his power

Deontay really knows his stuff. I mean, adding a new trainer and expecting him to make dramatic improvements in one training camp is unrealistic. It took Fury 12 years to get to this point with his fighting style. His trainer Sugar Hill isn’t likely going to have much success in turning him into Mike Tyson after just one training camp.

If that’s what Fury is hoping for, he’s going to be disappointed. You can argue that Fury was never meant to be a big puncher, and it’s pointless for Sugar Hill to even try and make improvements in this area.

Fury throws his punches while standing straight up like a big bird, and he’s never going to get any power on his shots like that. With that said, it’s understandable why Fury doesn’t widen his stance in an attempt to generate power. If he does that, he’ll be vulnerable. Fury won’t be able to dash away as quick if his stance is wide, which is why he always fights straight up and down.

Fury’s knockout talk is a setup for an excuse – Wilder

“I don’t see him coming in different from what he already did. If he really believes he beat me, then why would you change anything? If I claim to have beaten a man 10-2, what am I changing? I’m going in there to do it the same way again.

“All this knockout talk, it’s all a setup for an excuse. ‘I didn’t come to box this time. I came to square up and fight in the middle of the ring.’ That sounds good until it actually happens, and when it actually happens, we’ll see what happens. I’m going in to have fun. The way I defeat him is going to be memorable,” Wilder said.

If Deontay is correct in his prediction of Fury blaming his impending doom on his decision to slug it out with him, then he’ll be able to tell his sympathetic fans afterwards that he’ll be reverting to his old style for the trilogy match.

At that point, you have to believe that Sugar Hill will be ushered out in favor or Davison. In other words, Fury’s training team will be like a revolving door. It’ll be bad for Sugar Hill if he’s replaced with Davison, but he obviously was brought in to try and rebuild Fury into something that he was never intended on being. He’s never going to be a knockout artist like Deontay. Fighters like him come around only rarely in this sport.

“I’m more confident of the right hand, and I’m able to throw it straight and I’m able to hit my target. Probably less than 50 [percent],” said Wilder when asked what percentage his right hand was at for his first fight with Fury. “I have tremendous power.

“I’m blessed with it. Being that my arm was broke, and I had something in my chest, a little sick, you know? That played a big part in it, I could feel it. That wasn’t going to weigh me down. I’m known for fighting with many different difficulties. It don’t matter for me. I don’t make excuses,” said Wilder.

If Wilder was able to knockout Fury with an injured right arm that was only 50% last time, it’ll be interesting to see what he can do at 100% power this time. Wilder says he had a chest cold as well last time. That obviously couldn’t have helped.


« Ryan Garcia vs. Francisco Fonseca this Friday LIVE on DAZN