Carl Froch: ‘Fury is too big and too clever for Wilder’

By Tim Royner: Sky pundit and former super middleweight champion Carl Froch is predicting that Tyson Fury (29-0-1, 20 KOs) will be too big and too clever for WBC heavyweight champion Deontay Wilder, and he’ll box his way to a decision win in their upcoming rematch on February 22.

Froch has studied the previous Wilder-Fury fight from 2018, and he noted that the much bigger 6’9″ Fury was able to hold his long lead arm out in front of him to keep the slightly shorter 6’7″ Wilder (42-0-1, 41 KOs) from getting in punching range. But when Wilder did come in range,

Fury used his huge bulky size to grab him in a bearhug to keep him from getting his shots off. With Wilder not willing to give ground to keep from getting grabbed, Fury was able to nullify his offense through much of the contest.

Had WIlder adapted, he would have stepped away from Fury and fired right hands he approached to try and hold. In the end, Wilder failed to do this, and that made his fight a lot more difficult.

Wilder was getting manhandled by Fury last time

“If he gets caught on the chin, it’s a worry for Fury, but he’s not stupid,” said Carl Froch to IFL TV on the Wilder vs. Fury 2 rematch. “He never had any decent fights until he jumped in there with Wilder the first time. Now he’s had a couple of more fights, and he’s had a bit of time. He’s had more time in the gym to get into even better shape.

“I just think that the sheer size of Fury. He’s big and heavy,” said Froch. “Each time Wilder gets near him, he’s able to hold him off with his long jab, and manhandle him, and keep hold of him. I just think he can get through the fight, land some nice punches, and win the fight. I don’t think he can knock him out,” said Froch about Fury.

The size did bother Wilder, but so did all the feints that Fury used. Wilder fought like he hadn’t properly trained for Fury’s style. He should have been a lot more comfortable with the things that Fury showed him in that fight, but he wasn’t.

Fury has to adapt in the rematch

In the championship rounds, Wilder finally got comfortable, and that’s when he started dropping Fury repeatedly. Fury’s fans blame that on his fatigue, but it was more of a case of Wilder figuring him out.

That’s wrong. Schwarz was a woefully poor opponent with an inflated ranking. In Wallin’s case,  he was below some of the fighters that Fury has fought like Wladimir Klitschko, Christian Hammer, Dereck Chisora and Steve Cunningham.

It would be smart for Fury to have another plan to fall back onto if his feints and taunting Wilder fails to get the same reaction as the first fight. Fury won’t last long if Wilder hesitates to throw his right hand down the middle or at his flabby midsection. Wallin was targeting Fury’s body from the early rounds last September, and you could tell that he wasn’t happy when the Swedish heavyweight would nail him there.

Fury’s clowning style of fighting is difficult to deal with

“When Fury beat Klitschko, Klitschko never got going, because Fury messes around, he throws a lot of feints, he pulls his tongue out at you,” said Froch. “He’s such a clown in the ring, fools around, which is a good part of his game.

“Klitschko never threw a punch, and Wilder was unsure early on. And when he finally started throwing, he connected and landed,” said Froch.

The clowning style of Fury worked against Wilder last time through the first eight rounds, but it was ineffective in rounds 9, 10, 11 and 12. You’ve got to assume that Wilder won’t fall for the clowning stuff this time, and he’ll treat round 1 as a continuation of the 12th round last time. That’s bad news for Fury, because he could get knocked cold in the 1st round if he’s trying to beat Wilder with his clowning bit.

Fury too big and too clever for Wilder

“If Wilder picks in where he left off, and starts early and starts landing that right hand to the chest and the body, that’s his chance to get Fury out of there,” said Froch. “I think Fury is too big and too clever, and he’ll just do what he does. And I can just see him hustling Wilder out of a points win, and I think it’s great.

“I like Wilder as well. If Wilder lands on his chin, it’s lights out for anyone,” Froch continued. “He climbed out in the last round, so it might not be lights out for Fury. It’s a great fight. I look forward to it,” said Froch.

We’ll see if Froch is correct about Fury’s size and ring IQ being too much for Wilder, who basically will be a cruiserweight on February 22. A lot has been made on Fury having lost weight, but he’s still expected to come into the fight in the 250s.

Will Fury’s ring IQ help him against Wilder?

Fury is a smart fighter, but Wilder’s power has a way of making that attribute meaningless. It’s hard for clever fighters to avoid getting hit on the button every now and then when they face knockout artists. With Wilder, all he needs to do is land one big shot and it’s game over.

In Fury’s last bout, he weighed 254 lbs against Wallin, and he didn’t look improved over what we saw against Wilder In the Wilder fight, Fury weighed 256 lbs, and he looked the same as he did against Wallin.

In Fury’s fight with Schwarz, he weighed 263 lbs, and he fought well. So all the talk about Fury’s improved conditioning is likely just wishful thinking. He’s still going to have flab around his midsection just like he did for the first Wilder fight, and for all his other contests 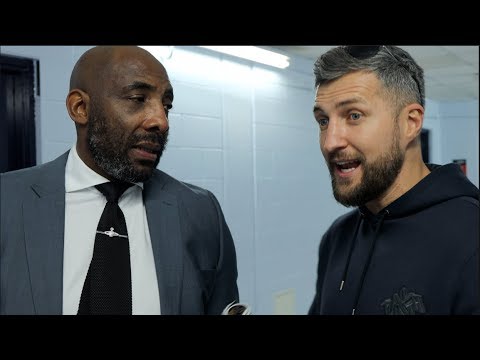 Ryan Garcia vs. Francisco Fonseca this Friday LIVE on DAZN »