Canelo Alvarez’s May 2 opponent will ‘SURPRISE’ everybody – Eric Gomez 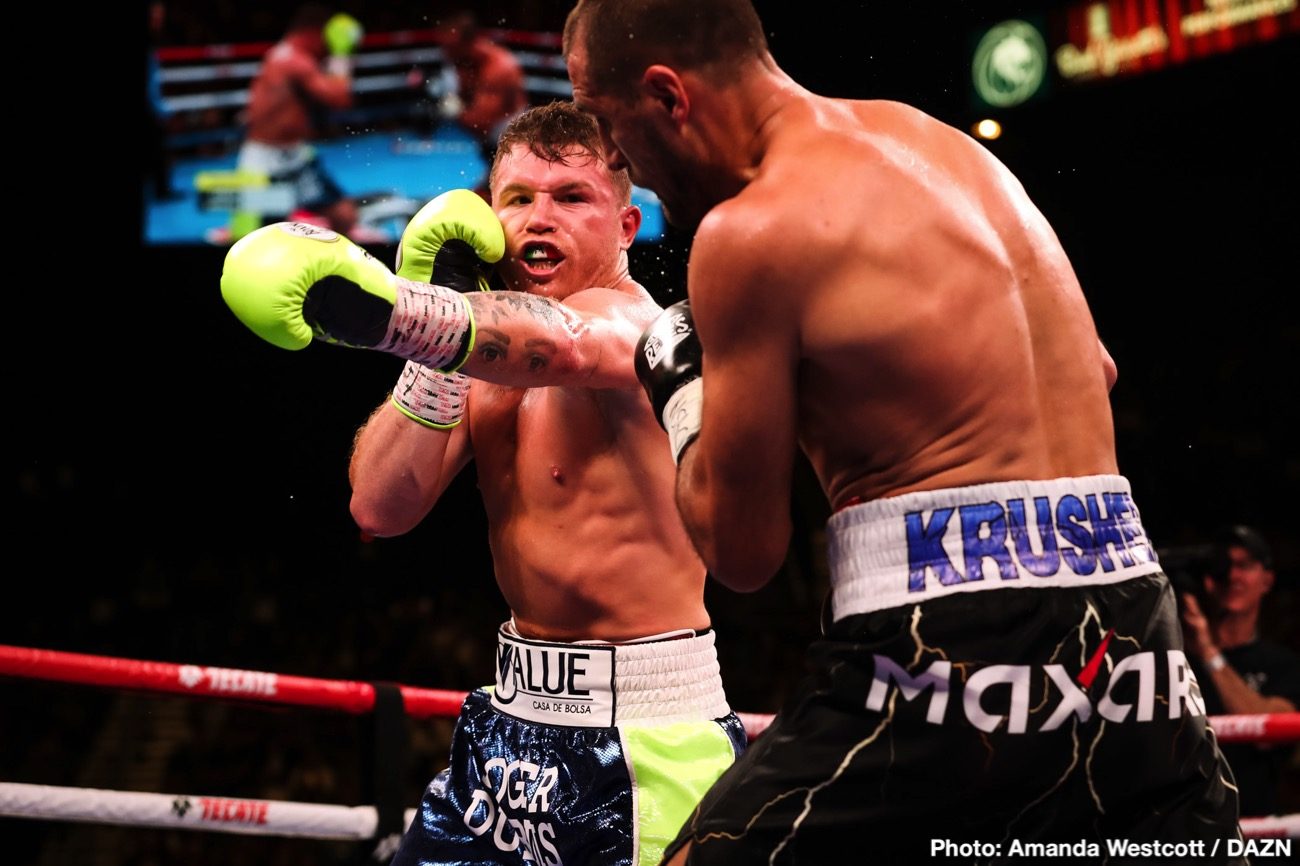 By Sean Jones: Eric Gomez of Golden Boy Promotions revealed on Tuesday that they’re close to having an opponent finalized for May 2 for Canelo Alvarez’s next fight. Gomez says they’ll have an announcement soon for Alvarez’s fight on Cinco de Mayo, and says it’s going to “SURPRISE everybody.

Gomez says he personally would like to see Canelo Alvarez face Gennadiy Golovkin in a trilogy fight, as there’s still a lot of interest from fans in that fight. At this point, Gomez thinks Canelo would knock out the 37-year-old Golovkin, who looked poor in his recent 12 round unanimous decision win over Sergiy Derevyanchenko last October.

However, it’s up to Canelo, says Gomez, and he’ll be the one that will decide when to ace GGG again. Golovkin has a title defense for his IBF middleweight title coming up against Kamil Szeremeta.  That fight could take place in May due to Golovkin having suffered a calf injury.

Eric says it’s a “dangerous” for Canelo Alvarez (53-1-2, 35 KOs). That’s as far as Gomez is willing to go in dropping hints about the May 2 opponent for the Mexican superstar. But just saying that the opponent is DANGEROUS pretty much rules out WBO super middleweight champion Billy Joe Saunders as the guy that Canelo faces on the 2nd of May, given that he can’t punch.

Saunders (29-0, 14 KOs) a fighter that wins with his boxing skills rather than his power, so Gomez would be misleading fans if he’s the one that is picked. WBA super-middleweight champion Callum Smith (27-0, 19 KOs) is definitely dangerous, and he’s one of the two that were mentioned as candidates for Canelo’s next fight.

Callum can punch, but he looked very beatable in his last fight against his WBA mandatory John Ryder last November. He just barely beat Ryder, who is someone that would likely be easily beaten by 168-lb champions David Benavidez and Caleb Plant.

It was believed that Callum had priced himself out, but maybe Golden Boy chose to continue negotiating with him. Callum’s promoter Eddie Hearn of Matchroom Boxing isn’t saying anything.

Canelo’s opponent to be announced shortly

“An announcement is going to come shortly. I’d rather not say who it is at this time, but we’re very close to finalizing a deal,” said Gomez to Fino Boxing on Canelo Alvarez’s next opponent. “There are some final details that need to be worked out, but it’s going to surprise everybody.

“The opponent is secure, and it’s one of the top fighters in boxing,” Gomez said on Alvarez’s next fight. “It’s actually a very good fight and a very dangerous fight for Saul. It’s a very dangerous fight, but that’s who he wanted, and we’re hoping to announce it very soon. Anytime now,” said Gomez when asked ‘when the announcement for Canelo’s next fight will take place.’

“I think they know it but they try to take advantage of the fact that he’s making so much money,” said Gomez about Canelo’s opponents wanting a lot of money. “For them, they’re going to make the most money in their career, which is what should happen to fight Canelo Alvarez. But some people have an inflated value of themselves, and they’re finding real quick that they’re out-pricing themselves, and they’re going to end up not fighting him.

If Canelo’s opponent is someone like Jamie Munguia or Fedor Chudinov, fans won’t be excited about that. Likewise, there’s little interest from fans in seeing Canelo face WBA ‘regular’ middleweight champion Ryota Murata.

A fight between Canelo and Murata is possible for September, which means that Gennadiy Golovkin may need to wait until 2021 before he faces Alvarez.

Gomez: Canelo will decide if he wants to face GGG again

“I think everybody wants to see that fight,” said Gomez on the trilogy fight between Canelo and Gennadiy Golovkin. “There are a lot of fans that still crave that fight, and didn’t get enough of the first two fights. Both fights were very exciting, very good, and every minute of every round of every second, it was a very good fight.

“I think when you have a lot of interest in a fight like that, there’s going to be a lot of pressure to make that fight,” Gomez said on Canelo vs. Golovkin 3 fight. “Ultimately, it’s going to be up to Canelo. He’s won that right to decide whether he wants to fight him or not. Personally, I’d like to see the fight. I think Canelo could stop him now, but ultimately it should be up to him,” said Gomez.

It would be good for Canelo to fight Golovkin while he’s still winning, and one of the top fighters at 160. Golovkin didn’t look that good in his fight with Derevyanchenko, and that’s a match that some believe he should have lost.

At this point, it would be risky for Golovkin to face Jermall Charlo or Demetrius Andrade. If Golovkin moves up to 168, he will be under intense pressure to fight Saunders, Callum, Caleb Plant or David Benavidez. GGG might lose to all of those fighters, and look bad. That’s why Canelo needs to fight Golovkin soon while he still has something left.

Gomez believes British fans would travel to the U.S to see Canelo

“I think they’re excited now and energized because of Fury’s win,” said Gomez about the British boxing fans. “I hope that it inspired a lot of fans, and they travel well. The English fans travel well, so I think it’s going to inspire a lot of them to come out. So if it is against an English fighter, I’m sure they’ll come out and support,” said Gomez.