Arum: Tyson Fury will wear Deontay Wilder down and stop him 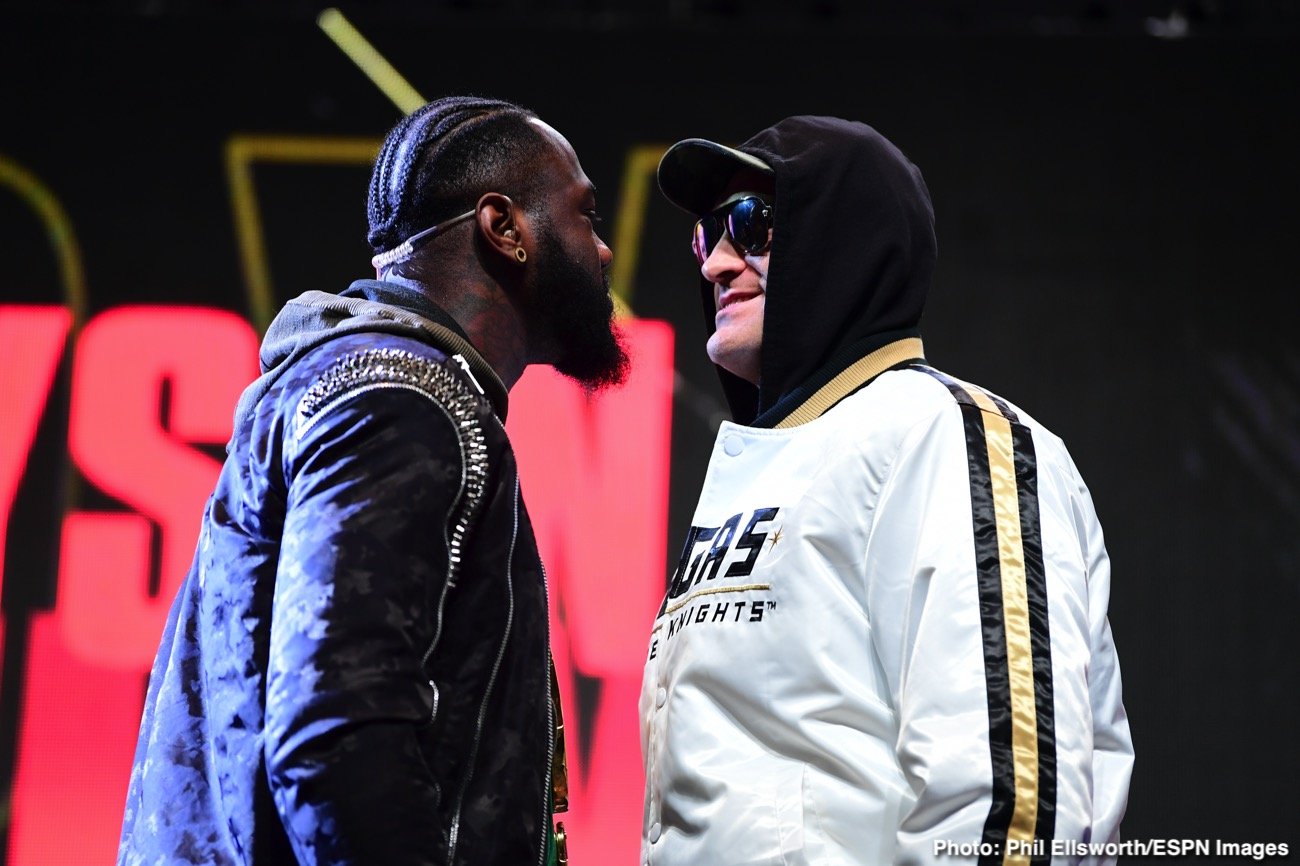 By Dean Berman: Tyson Fury will take a page from Muhammad Ali’s playbook by wearing Deontay Wilder out with pressure to defend him this Saturday night, says Top Rank promoter Bob Arum.

Fury is the underdog going into his rematch against unbeaten WBC heavyweight champion Wilder (42-0-1, 41 KOs) at the MGM Grand in Las Vegas, Nevada.

Arum thinks that Fury will be able to wear Wilder down in the same way that the 32-year-old Ali wore down knockout artist George Foreman and stopped him in the 8th round on October 30, 1974.

Going into that fight, many boxing fans felt that the young 25-year-old Foreman would be too strong for the aging Ali, and would make easy work of him as he’d done against Ken Norton and Joe Frazier. Ali let Foreman wear himself out by using the rope-a-dope strategy through the first seven rounds of the contest.

In the 8th, Ali got off the ropes, and took the fight to a badly fatigued Foreman, and knocked him. Foreman appeared to be done in by not only the fatigue, but also the heat inside the ring. He wasn’t accustomed to fighting in Zaire, and the heat got to him.

Fury will wear Wilder down as Ali did with Foreman

“The fight I remember was legendary was the rope-a-dope [by Ali], but that’s not what beat Foreman. What beat Foreman was Ali took the fight to him, and got him tired, made him suffer, and finally knocked him out,” said Arum to Fighthub in comparing the Wilder vs. Fury 2 fight to the Ali vs. Foreman contest.

“That’s the way to beat a big puncher. To get him tired, weaken him, and if you can’t knock him out, then you’ve weakened him, and you can go to a victory by decision,” said Arum. “It’s not whether we want to or not. It’s in the contract that we have it, and only the loser can opt-out,” said Arum when asked if he wants to make a trilogy fight if Fury defeats Wilder on Saturday.

There’s a difference between Deontay and Foreman, and that’s something that’s a variable that Arum is leaving out. Before facing Ali in 1974, Foreman had ALWAYS had stamina problems his entire career.

This wasn’t a new thing. The big punching Foreman had always had gas tank problems, and Ali took advantage of that by letting him wear himself out hitting his gloves with the rope-a-dope. Wilder hasn’t shown the same stamina problems during his career, and you can’t count on him gassing out.

Foreman was a good puncher, but he didn’t possess the same one-punch power that Wilder has. If Wilder is able to land as many punches on Fury as Foreman did in the first seven rounds against Ali, there’s very little chance Fury will still be around by the 8th. We’re talking apples and oranges in comparing Foreman to Wilder.

Trilogy fight happens in 2020 unless Wilder doesn’t want it

“Unless Wilder, under that circumstance, doesn’t want to do it,” said Arum in assuming that Fury beats Deontay. “I think he has three fights left after this,” said Arum on Fury still has 4 fights on his contract, and not 3.

Foreman wanted a second fight with Ali, but he was never given one. That’s something that Arum didn’t mention. With the improvements that Foreman made later in his career to his game, he likely would have beaten Ali in a rematch. As dangerous as Foreman was, Ali would have had problems in a rematch.

It’s pretty obvious that Wilder will take the third fight with Fury, whether he wins or loses. There’s too much money at stake for Wilder or Fury to walk away from the trilogy match. Wilder would take a big career hit if he chose not to force a third fight with Fury if he loses to him on Saturday.

Kubrat Pulev next for Fury after he beats Wilder TWICE

“We’ll go after [Kubrat] Pulev after Pulev knocks out Joshua, and try and unify all the belts,” said Arum in giving Fury’s plans for after his trilogy match against Wilder this year. “I think we’ve reached agreements on all the salient points, and now we’re going through the paperwork.

“It’s going to end up on June 20th in London,” said Arum when asked WHEN the Anthony Joshua vs. Pulev fight will be taking place. “That’s up to Eddie [Hearn]. It won’t be Wembley. It’ll be either Arsenal or Tottenham, as I understand. Eddie is a good businessman,” said Arum.

Kubrat Pulev is going to need a lot of luck for him to beat Anthony Joshua in June. Arum is obviously picking Pulev because he promotes him, but it’s not realistic to believe that he’s going to beat Joshua. The most likely scenario for next year will see the Wilder-Fury 3 winner facing Joshua.

“We’ve never had a problem working together,” said Arum about Hearn.”Where I have a problem with Eddie is, he shoots his mouth off and says things that are stupid or even if they’re NOT stupid, have nothing to do with him, but he’s trying to tear down somebody else. That is dumb. He has been a disaster in this country.

“I understand he spent $100 million dollars in barely getting 100,000 subscribers to DAZN, and if that’s good business, then you’ve got to tell me what bad business is,” Arum said about Hearn.

“Everyone would go [over to DAZN to fight]. What the hell, the ring is the same, and it’s better than a lot of countries [fighting in the UK], because the language is the same, and they have great fight fans. I have never had any compunction about bringing any of my fighters to the UK,” said Arum.

It’s interesting that Arum says Hearn has only brought in 100,000 subscribers to DAZN. If that’s accurate, it sounds like a low total, but he’s just getting started.