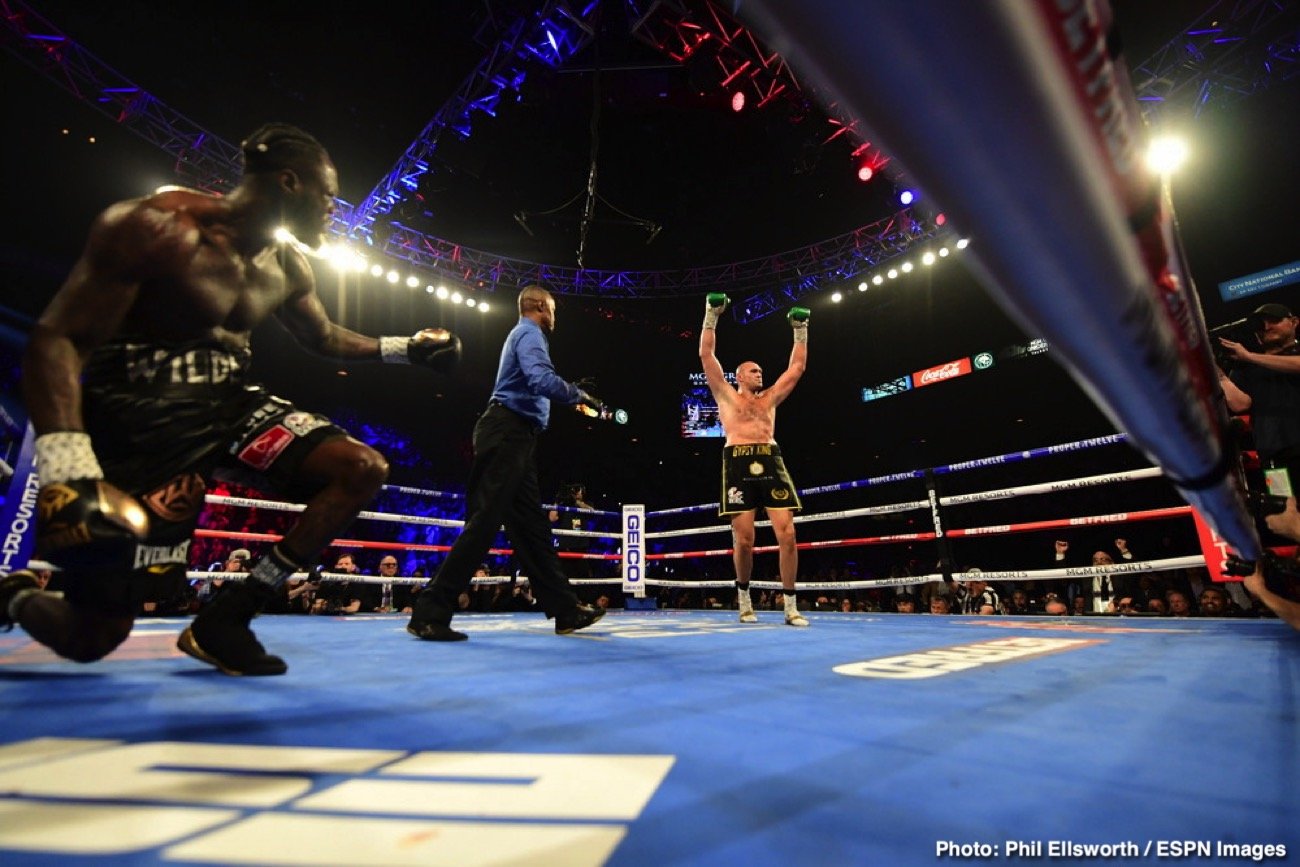 By Allan Fox: Andre Ward says he wouldn’t advise former WBC heavyweight champion, Deontay Wilder, to take the trilogy fight with Tyson Fury next after the way he was dismantled by him last Saturday night in a 7th round stoppage loss at the MGM Grand Arena in Las Vegas.

Former two-division world champion Ward understands the pride and competitive nature that the 2008 U.S Olympic bronze medalist Wilder has in likely wanting to try and immediately avenge the loss to the 6’9″ Fury, but he wouldn’t recommend him taking that fight.

Ward isn’t sure that the 34-year-old Wilder can rebuild his game at his age. He’s in his mid-30s, and he’s spent his entire 12-year professional career fighting with the same style. To change that at this point could prove to be difficult.

“I’ll be tough,” said Ward to Fighthype when asked if Wilder at 34 can make those improvements in his game. Psychologically it’s going to be tough because your whole house is built on one thing in having your way. It works until it doesn’t work. He’s just going to have to pick up the pieces.

“Anything can happen. I’ve seen guys with fabulous reputations coming at me. They don’t quite come back the same. They don’t have the same aura about them. It’ll be interesting to see if he takes the rematch.

“I wouldn’t recommend it, but I understand the heart, and I understand the competitiveness,” said Ward on his opinion that Wilder shouldn’t force the third fight with Fury. “Some guys have the mentality of, ‘You did undress me, you did stop me on my feet, but you’re going to have to do it again.

“It could be one of those flukes.’ Some guys bow out,” said Ward. “I don’t know. He’s not going to do that,” said Ward when asked if maybe it was too fast of a turnaround for Wilder from his last fight against Luis Ortiz last November.

“Everybody has got stuff going on. After he got hurt, his legs never recovered. If he ruptured his eardrum, it affected his equilibrium as well. It was like the perfect storm, man,” said Ward.

The money that Wilder can make in the third fight with Fury will likely be too good for him to pass up for him not to execute the rematch clause.

Deontay could have quit with his injuries

“Because he had the audacity to attack a man that doesn’t get attacked,” said Ward of Fury in his decision to attack Wilder. “Wilder put up a good fight, he threw some heavy shots, landed a few. Wilder showed a lot of heart. He was hurt, man. I’m assuming it was his eardrum.

“I don’t know if he had a fractured jaw. His left side was swollen,” said Ward about Wilder’s injured ear and jaw. “There was blood coming out of the mouth. He was going through a lot and he could have packed it in, but he didn’t. Yes and no,” said Ward when asked if he was surprised at how dominant Fury was. “I’ve seen that. Every puncher has their day. I’m not just talking about a guy that can punch.

“I’m talking about a guy that builds his reputation on fear and intimidation,” said Ward on Wilder’s mystique being shattered. “That works until it doesn’t work. You’ve got to work on the aspects of the game with your team. They’ve got to challenge you and say, ‘Look, you may fire me, but I’m going to pick your game apart because one day somebody isn’t going to lay down.” said Ward.

It’s pretty clear that Wilder wasn’t the same after the first knockdown of the fight in round 3. He looked like he wasn’t there from that point on. But that’s not to say that he wouldn’t have still lost the fight even if he hadn’t been dropped hard in the third, because he looked completely over-matched by Fury.

“Boxing moves quickly, doesn’t it?” said Adam Smith of Sky Sports to Boxing Social following Wilder’s loss to Fury. “Anthony will want it, Tyson will want it, and it’s going to be the biggest fight in British terms ever maybe. Globally it’s going to be enormous because Fury has built a large following here [in the U.S] with fanbase here, as well as in Britain.

“Anthony Joshua is well known globally, both of them have all the belts, and they’re different characters and different styles,” said Smith on Joshua and Fury. “Obviously there could be a third fight. Wilder will have the chance to evoke the rematch clause. He’ll have 30 days to do it. Will he want to do that, and will there be a call for that. We’ve got to wait for that.

“Joshua has got to fight Pulev, and Pulev is with Top Rank, and Top Rank is with Fury. Who knows? I will certainly be one person pushing for Joshua-Fury more than anyone. He was brave, Deontay. He was really, really brave. This was Tyson Fury’s night. What a story from where he’s come from. Tyson Fury has cemented his place as an absolute legend tonight,” said Smith in beaming about Fury’s win over Wilder.

It’s in the contract that the winner of last Saturday’s Wilder-Fury 2 rematch will get 60% split and the loser 40% for a third fight. But even at 40 percent, Wilder would be making a heck of a lot more money than he would in taking a rebuilding fight against one of the contenders in the top 15.

Joshua vs. Fury has to happen now – Adam Smith

“Of course, there’s going to be debated until they [Fury and Joshua], but Anthony does have that defeat to Andy Ruiz, but he got the beautiful revenge out there in Saudi,” Smith said about whether Fury should be rated above Joshua. “But let’s talk of Tyson Fury tonight. He’s unbeaten, he’s the WBC champion, and he is the man to beat. He is absolutely [great]. What he did tonight was phenomenal.

“Let’s bring the AJ fight on. It has to be made now,” said Smith. It’s enormous. I think it’s great for British boxing, and we’ve got all the belts. Okay, we’ll try,” said Smith when told to bring the Joshua vs. Fury fight to the UK.

Joshua vs. Fury can only happen if Wilder decides he doesn’t want the trilogy match, and it looks like he’s taking that fight. Wilder’s manager Shelly Finkel revealed at the post-fight news conference last Saturday that they will be taking the trilogy match with Joshua next.