Adrien Broner on Devin Haney: ‘I’ll STOP him; he’s the one trolling’

By Chris Williams: Before being arrested last Friday at the MGM Grand, Adrien Broner said he’s ready and willing to fight lightweight champion Devin Haney, and he’s knockout him out at 135. But as far as Broner (33-4-1, 24 KOs) is concerned, the fight does nothing for him because he gains nothing from beating a 21-year-old Haney.

With that said, Broner WILL take the fight against the unbeaten Haney (24-0, 15 KOs) as soon as his promoter Eddie Hearn gives him the $20 million that he requires to take that fight.

“Yeah, tell Eddie Hearn, they got all that money,” said Broner when asked if a fight between him and Haney can happen. “Tell him to put the money up.  I’ll win. He the one trolling,” said Broner in talking about Haney when told that he called him a ‘TROLL’]. “He the one trolling. I’m ‘the man.’ He trying to be like me. Come on, man. He better stop playing.

“Nah, man,” when asked if a fight between him and Haney is a ‘big money fight.’ I got everything to lose, and nothing to gain. If I beat him, they’d go, ‘Ah, you was supposed to do that. You got more experience. You bigger and stronger.’ If he beats me, then I lose. You know what I mean? I got nothing to gain from that. Man, tell Eddie Hearn to put the money up, and I’ll STOP him,” said Broner about Haney.

That would be bad for Haney to lose to Broner by a knockout, but he’s still young enough to come back from a loss of that nature. Also, Haney would have a built-in set of excuses if he loses to Adrien. Haney can always blame it on these factors:

Hearn has got to come up with Broner’s $20 million

From a larger perspective, Broner would be helping Haney’s career by facing him. For Haney to get to the next level, he needs to fight popular fighters like Broner, Vasiliy Lomachenko and Ryan Garcia.

If Haney can get a fight against Broner, it’s going to increase his star power in the sport, even if he loses the bout. Haney will be known after the Broner fight. It’s like in Hollywood. All it takes in a lot of cases is for an unknown actor to be put in the right movie, and they end up in demand from the point on. To turn a fighter into a star, it’s not cheap sometimes to get the right guy name guy to fight them.

Look at Canelo Alvarez. He had to take the B-side position to get a fight against Floyd Mayweather Jr. in 2013 to become a star. Manny Pacquiao had to do the same thing against Oscar De La Hoya in 2008. Now it’s Haney’s turn. He needs a fight against Broner to become a star, and Adrien is saying it’ll cost $20 million to make that happen. You can argue that $20 million is a drop in the bucket compared to the kind of money Haney will make over the next 15 t0 20 years of his career. It may initially hurt to pay that kind of money to Broner to get him to fight Haney, but in the long run it may be worth it.

Haney: ‘Broner is a TROLL’

“He’s a f—- troll. He just says anything just for clicks of whatever,” said Haney to Behind The Gloves on Broner. “I’m the first one that initiated it when I said, ‘How many people want to see this fight?’ when it was a picture of me and him. And that’s when he retaliated or whatever he said. He said he’d go down to 135 to fight me. How realistic is that?

“His profile speaks for itself. Half the boxing world stopped when I and he were going at it. He knows he’s worth a lot, and that’s why he’s saying he wants $20 million, which he will never get that. I think that fight would be a good fight for my resume,” said Haney in making it clear that he NEEDS Broner’s name on his resume.

When Matchroom Boxing fighter Anthony Joshua challenged IBF heavyweight champion Charles Martin in 2016, Hearn came up with the money to get the American to come to the UK and give AJ the fight to make him a champ.

The same thing when Joshua needed Wladimir Klitschko’s name for his resume. Hearn made it possible to increase Wladimir’s interest enough to make that fight happen. If Hearn can do that for Joshua, then he can probably do the same thing for Haney in getting him a fight with Broner.

Devin wants to add Broner’s name to his resume

“That would be a great fight, and one of the biggest fights in boxing today,” said Haney when asked about him facing Ryan Garcia. “It’s an easy fight to make. I’m on DAZN, and he’s on DAZN. He’s with Golden Boy, and I’m with Matchroom. It’s an easy fight to get made. Who knows? We’ll see soon.

Haney can get the fight with Broner if Hearn is willing to come up with the bread. If this was Joshua at the start of his career with him needing a big name to make him a star, would Hearn come up with the loot to get the opponent he needs to make that happen? I’d say that’s a big YES. So if Hearn isn’t willing to do that for Haney, then what does that tell you about his standing? 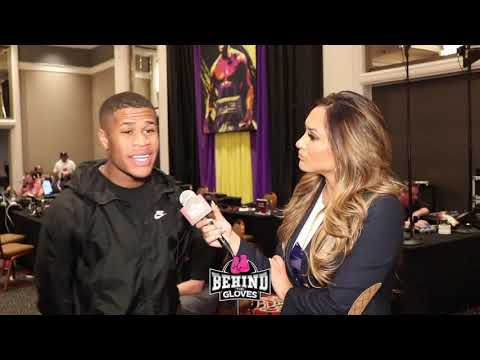