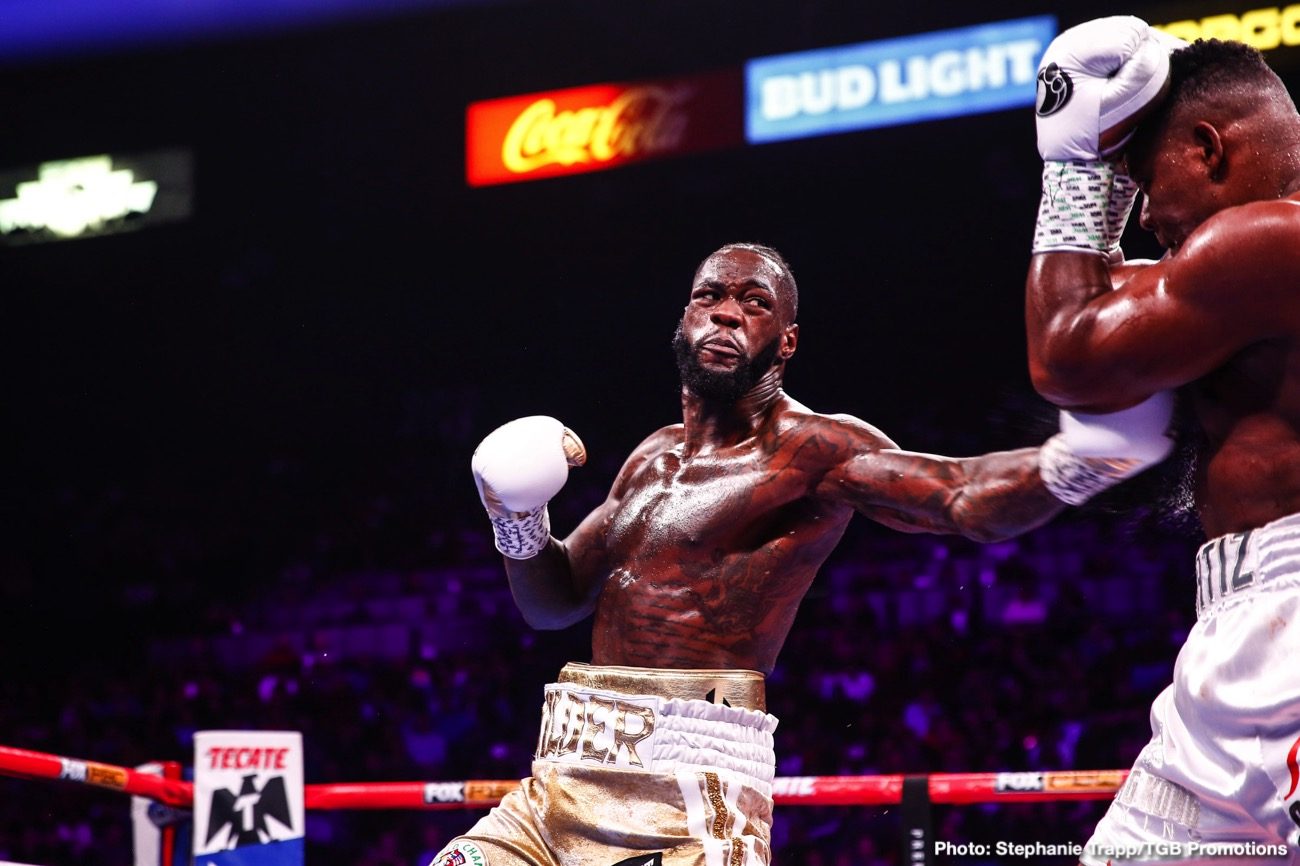 By Tim Royner: Trainer Johnathon Banks says Deontay Wilder was NEVER knocked out by Wladimir Klitschko during their sparring sessions many years ago. Banks does say that the 6’7″ Wilder was dropped by Klitschko once, but obviously that’s a far different thing than being knocked cold.

British heavyweight Dillian Whyte stated earlier this month that former IBF/WBA/WBO champion Klitschko had knocked Wilder out cold in sparring, and that he was twitching on the canvas. I

t’s unclear why Whyte would want to go overboard with retelling an old sparring story. The sparring between Wilder and Wladimir likely took place shortly before his November 2014 title defense against Kubrat Pulev.

Banks: NO truth in Wilder being knocked out by Klitschko

“I’m the one who picked Wilder and all the other sparring partners to come,” said Banks to @ThaBoxingVoice. “Did Wilder get knocked out cold in sparring by Wladimir? No, that’s the truth, it didn’t happen. Did he get dropped? Yes, he did.”

Is Whyte’s memory faulty or does he have a reason to want to make Wilder look bad? Whyte does seem bitter about being ranked #1 with the World Boxing Council for a long time, and not being given a voluntary title shot against Wilder.

It was the WBC that chose not to make Whyte the mandatory for Wilder. That’s not something that Wilder was in charge of. So the only argument that Whyte has is he didn’t get a voluntary title shot by Wilder.

Whyte gives his description of Wladimir’s sparring with Wilder

“Wlad backs up, changes his footwork, feinting, feinting, jabs to the body, throws that feint jab, left hook. Wilder had his hands up, he was gone,” said Whyte to skysports.com. “It wasn’t no knockdown, he was knocked cold. Properly twitching as well.”

Since Banks has nothing to gain from denying that Wilder was knocked out by Klitschko, you must conclude that it never happened. In other words, Whyte added his own spin to what happened in the sparring session between Wilder and Whyte.

The WBC attempted to have Whyte earn the WBC mandatory title shot in 2018 by mandating that he fight Luis ‘King Kong’ Ortiz, but Dillian and his promoter Eddie Hearn decided not to take part in the eliminator for some reason. They chose the arguably better paying fight between Whyte and Dereck Chisora.

It was a business that ended up delaying Whyte’s chance of getting a world title against Wilder. Maybe Whyte and Hearn believed that the WBC would change their mind about wanting him to fight in a title eliminator against Ortiz.

Obviously, they didn’t change their mind, and didn’t give Whyte the mandatory spot until he FINALLY fought and beat Oscar Rivas by a 12 round unanimous decision last year in July.

“I had a meeting yesterday with [Joshua trainer] Rob McCracken and Freddy,” said Hearn Matchroom Boxing . “Let’s look at the division. Who do we want to fight? We know we have [Kubrat] Pulev as one mandatory, and [Oleksandr] Usyk is another mandatory. He [Whyte] wants the winner of Wilder vs. Fury. Who do you want to fight? The name that always comes up is Dillian Whyte, and sometimes .

“Sometimes when it’s right in front of you, then maybe we just make the AJ fight,” said Hearn about Whyte. “AJ is not going to be dictated to by the belts, so maybe he [Joshua] bins off Pulev and Usyk, and fights Dillian in the summer.

“Anything can happen, but I know and I believe, and I think Dillian believes this as well,” said Hearn. “AJ wants to fight Dillian, and I know Dillian wants to fight AJ. So you hope you’d get to a situation where…the country [UK] would stop for the fight. That would be an epic fight.

“We were talking about the first fight today,” said Hearn remembering the 2015 fight between Whyte and Joshua. “I remember the first press conference, there was such a chilling energy between you two, and now you’ve both grown up at the same time in the same division,” said Hearn.

Whyte (27-1, 18 KOs) doesn’t want to wait until 2021 for his title shot against the winner of the Wilder vs. Tyson Fury 2 fight. The WBC already replaced Whyte with Fury as the mandatory to Wilder after his adverse findings were revealed following his victory over Oscar Rivas last July.

Since the WBC’s champions are only required to defend once a year, Wilder’s next mandatory after his February 22 rematch with Fury will be in 2021. Whyte is impatient and doesn’t want to wait.

Dillian says he’ll run Joshua over in the rematch

“We’ll always have that animosity,” said Whyte about him and Joshua. “We can be cool. If I see him fainting in the road, I’ll stop my car and help him out, but if we’re fighting, I’ll run him over. I’m not an evil person, and I’ll help anyone. But if you’re in my way, I’ll run you over. I don’t wear nothing silk, but Joshua does,” said Whyte.

Hearn would like to make a fight between Joshua and Whyte, since it would make a lot of money with Sky Box Office pay-per-view. He should have already done so in the last five years. Unfortunately, Dillian has wasted a lot of time with low level fights that have done little for him.