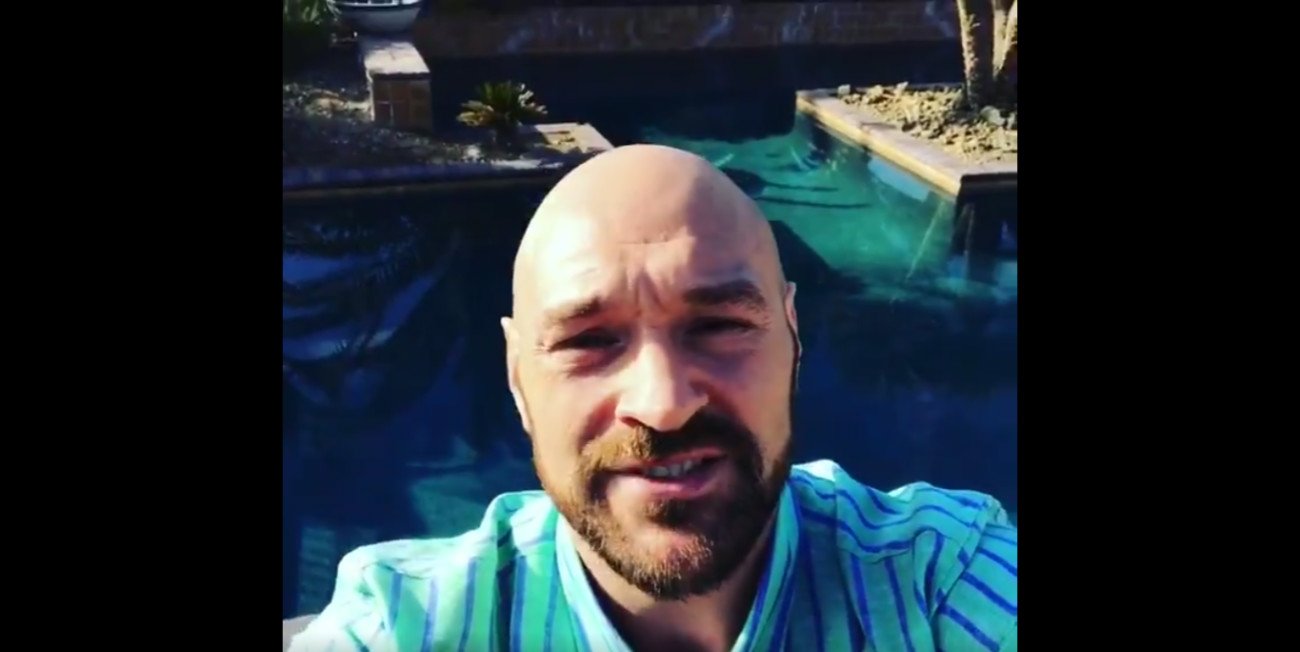 By Charles Brun: Tyson Fury posted a reminder to Deontay Wilder on his Instagram to let him know to make sure he shows up for their press conference this Monday, January 13 in Los Angeles, California.

With the emphasis on the Wilder-Fury 2 rematch bringing in more pay-per-view buys than their first fight in December 2018, it’s important that they work in unison to sell the fight. The last time they fought, it brought in approximately 325,000 buys on Showtime.

“Hey, this is Tyson Fury AKA ‘The Gypsy King, the lineal heavyweight champion of the world. Wilder, you want to show up tomorrow, you little b—,” said Fury on his Instagram in TELLING Wilder he needs to show up for Monday’s news conference in Los Angeles, California. “Don’t shake yourself like you’ve been doing for the last year or so. Don’t want any part of the Gypsy King, do you? You’re going to get smashed. Tomorrow, I begin living in your head rent free, you little b—-. See you there,” said Fury.

Fury’s new promoters at Top Rank believe that the rematch could top 2 million buys with it being shown on ESPN and Fox Sports pay-per-view. What could hurt that sales though is Fury’s 2 fights since then against Tom Schwarz and Otto Wallin.

Both matches involved foreign fighters that American boxing fans had never heard of, and the fights were great ones. Schwarz was mowed down by Fury in 2 rounds last June, and Wallin had Tyson bleeding all over the map.

What makes it even more important that WBC heavyweight champion Wilder show up tomorrow is the fact that this is the only news conference for the fight. The promoters for the event believe it’s enough for Wilder and Fury to advertise the rematch during commercials for the Super Bowl and College football games.

Atlas questions whether Wilder vs. Fury 2 will bring in 1 million+ PPV buys

“It should be. I don’t know. It could be,” said Atlas to AB Boxing News when asked if Deontay Wilder vs. Tyson Fury 2 rematch will bring in over 1 million pay-per-view buys. “I don’t know if it will be, because with ESPN giving those two soft matches to Fury after they gave him $100 million dollars. They gave him [Tom] Schwarz, who really shouldn’t have been in the ring.

“Again, if they wanted to give him a gift for the first fight [on Fury’s contract with ESPN],” said Atlas on the 2 gimmes Top Rank set Fury up with after signing him. “I got it, and he gets knocked out in one. That hurts his credibility, and people are saying, ‘This is who he’s fighting?’ And then they [the boxing fans] start to move away a little bit,” said Atlas in commenting on the fan’s reaction to the two soft jobs Top Rank matched against Fury.

Atlas could turn out to be correct about his doubts on the Wilder vs. Fury rematch breaking 1 million buys on pay-per-view. That’s not something that the average boxing fans care about, obviously, but it’s important to Wilder, Fury and the promoters for the event.

Delaying the Wilder vs. Fury 2 rematch was a mistake

The promoters want the Wilder-Fury 2 rematch to bring in as many PPV buys as possible, since that would validate the decision Top Rank and ESPN made in delaying the fight. Atlas questions whether it was the right guy on the promoters and networks part in choosing not to strike while the iron was hot by making the Wilder vs. Fury rematch immediately.

Delaying the rematch could have worked if Fury was matched against 2 good fighters that the American boxing fans were familiar with instead of two obscure guys from Europe. If Top Rank had matched Fury against these fighters, it would have helped the Wilder-Fury 2 rematch:

Otto Wallin wasn’t supposed to be competitive with Fury

“You know what I mean? That was a great fight with Wilder, but if Wilder was the South Pole, then the fights they [ESPN] gave him afterwards were the North Pole. It’s the other way, the other direction. They’re giving him guys [Schwarz and Otto Wallin] that weren’t competitive. The second fight with Wallin was competitive. It’s not that the guy was great.

“The guy was solid, he was a southpaw, and he was a willing guy,” Atlas said about Otto Wallin. “He had an amateur background. In some ways, I don’t know if he exposed Fury, but he wasn’t supposed to be so competitive with Fury,” said Atlas.

Top Rank Boxing promoters probably weren’t familiar with the 6’6″ Swedish heavyweight Otto Wallin, seeing that he had the size, youth and the southpaw stance going for him. Moreover, Wallin hits as hard as Fury, and he had the ring IQ that made him understand that it was important to target the body. Wallin focused a lot of his shots to the body of Fury, and he rarely missed.

Fury suffered a bad cut over his right eye in the 3rd, and he fought the remainder of the way through a haze of blood.

“From those two fights, they have that [poor match-making] in their rearview mirror,” said Atlas about fans now see Fury as a guy that takes record-padding fights. “What they should have in their rearview mirror is the Wilder fight, the first fight, the great fight. Not fighting two lesser guys, where people might have lost interest [in Fury]. They might have forgotten about what Fury did, and they might have lost a little bit of interest.

“So when they [Top Rank] put Fury in there [with Wallin and Schwarz]. Whoever came up with this genius campaign of how they were going to do it,” said Atlas. “I get it. You give him [Fury] that money, and you give him a couple of easy ones. But when you put him in with the Washington Generals, people start to think you’re the Harlem Globetrotters.

“People aren’t going to pay $100 to watch Curly dribble around the floor in a boxing ring or to see the [late] great Meadowlark Lemon, and I love Curly [Neal],” said Atas on Fury.

“I love those guys, but that’s purely entertainment. But when it comes to a fight, and people are paying for pay-per-view, they want to see a serious fight. That’s what they want to see now,” said Atlas.

With Wilder vs. Fury 2 being an expensive PPV fight, it’s really important that fan believe that they’re going to see an exciting contest. Did Fury taint the rematch with his WWE involvement, and his 2 tune-ups against Wallin and Schwarz? Possibly.

The fans weren’t excited about Fury’s two tune-up fights with Wallin and Schwarz and many of them didn’t bother to watch. More than anything, that’s what hurt Fury and Top Rank. The boxing fans that did tune in, didn’t like what they saw. It wasn’t exciting stuff

People may have lost interest in Wilder-Fury 2, thanks to Fury

“Yeah, they don’t mind seeing Fury come out there with an Apollo Creed uniform on, and all that stuff,” said Atlas in continuing on raking Fury over the coals. “But when the opponent [Schwarz] lasts less time than to put that uniform on. That uniform takes more time to put on than getting rid of the opponent. You’ve got a little bit of a problem. You’re telling the audience something, and you start to lose a little seriousness.

“I don’t know how much they lost,” Atlas said about boxing fans drifting away after seeing Fury’s two mismatches against Schwarz and Wallin. “But if they lost some of it, then they’re going to diminish some of their pay-per-view numbers a little. It should do those numbers [over 1 million pay-per-view buys for Wilder vs. Fury 2]. I don’t know that it will, because of that.

“I know one thing. ESPN has the platform, and FOX to promote the heck out of this thing,” Atlas said about Wilder vs. Fury 2. “And they got something called the Super Bowl coming up, and a lot of people watch that. They’re going to do commercials during that time, and so they couldn’t ask for a better time to promote this fight,” said Atlas.

Some boxing fans have lost interest in the Wilder-Fury rematch, thanks to Fury, and his mismatches against Otto and Schwarz. That’s why it’s more important than ever for Fury and Wilder to do a great job selling their rematch.

Unfortunately, the same hunger doesn’t appear to be there for either fighter this time. It’s not the same. both guys don’t appear as excited about the fight as they were the first time, and you can’t blame them. They should have moved on, but they couldn’t, because they have unfinished business due to their draw from the first fight.