By Chris Williams: Regis ‘Rougarou’ Prograis says he wants to fight either Terence Crawford or the winner of the Mikey Garcia vs. Jessie Vargas contest.

Former WBA Super World light welterweight champion Prograis (24-1, 20 KOs) is coming off of a loss to IBF 140-lb champ Josh Taylor in the final of the world Boxing Super Series tournament on October 26, and he wants to get back in there for an important fight over a name guy like Crawford and/or the Garcia-Vargas winner of their fight next month on February 29.

Regis also wants a rematch against the 29-year-old Taylor, but that’s not going to happen soon.

It was a case of Prograis starting too late with his offense, as he fought Taylor’s fight in the first eight rounds. Instead of staying on the outside, Prograis fought Taylor in close, and didn’t do well.

Yeah, of course,” said Prograis to Fighthype when asked if Crawford is a fight that he wants.

“I want the winner,” said Prograis on the Mikey Garcia vs. Jessie Vargas fight. “I got Mikey [winning against Vargas]. I think it’s going to be a close fight, but I can’t say he’s going to get it, but I’m leaning towards him a little bit. But my predictions are always wrong,” said Prograis.

Prograis can pretty much forget about getting a fight against Mikey Garcia (39-1, 30 KOs) if he beats Vargas. Matchroom Boxing promoter Eddie Hearn has already made it clear that he wants to put together a fight between Mikey and Manny Pacquiao in April or May. If Hearn puts Mikey in with Prograis, there’s a good chance he loses that fight.

Top Rank promoter Bob Arum spoken recently of wanting to use Prograis as an opponent for WBO welterweight champion Crawford (36-0, 27 KOs), but it’s difficult to know if he was serious. Crawford has been fighting mediocre opposition since he moved up to 147, and Prograis would be a HUGE improvement for him.

Arum has been trying to turn Crawford into a superstar, but he’s been doing it the same way he’s been with Tyson Fury. In other words, Arum has been matching Crawford against soft opposition, and been a big waste of his potential.

“They finally fought and Errol Spence knocked out Terene Crawford, like bad,” said Prograis to Fighthype about a dream he had. “It was like he couldn’t get up. I don’t remember the round, but it was like an uppercut too. He [Spence] kept hitting him [Crawford], wearing him down, and beating the s— out of him, and he hit him with an uppercut and an overhand left, and he was out.

“He looked like something was a little off with him,” said Prograis on Spence in his first interview after his car crash. “100 percent, I still got Errol. I think it would be real close, but I think Crawford’s boxing skills are better than Errol’s. But Errol is so big, and he’s a pressure fighter,” said Prograis in analyzing a fight between Spence and Crawford.

Spence’s size, punching power and talent would give Crawford a lot of problems, and think Arum knows that. Crawford has been looking chinny lately in his fights with Egidijus Kavaliauskas and Felix Diaz. Terence isn’t even fighting good opponents, but his punch resistance doesn’t look good.

Crawford is vulnerable on defense

“Terence gets hit sometimes with big, clean punches,” said Prograis in questioning Crawford’s defensive ability. “If he gets hit by Errol, it’ll be a different story. That last dude [Egidijus Kavaliauskas] he fought, he hit him with some big s—. They say he [Crawford] did touch the canvas. Maybe he was dropped. They didn’t count it as a drop, but if Errol hits him with that same punch, I don’t know.

“At the same time, Terence Crawford has the style to beat Errol too, because he’s a mover, he knows how to switch, and do all this s—. If he gets caught by Errol with that big s—. Errol is the biggest puncher at that weight at 147 He’s definitely the strongest, and the biggest puncher. So if he gets hit by Errol, I don’t know what’s going to happen,” said Prograis on Crawford.

The way that Kavaliauskas and Amir Khan were able to hit Crawford with clean shots, it would be bad if Spence were the ones landing those same punches.

Arum signed Josh Taylor to his Top Rank Boxing promotion earlier on Thursday. It’s believed that Arum will quickly schedule a fight between Taylor and Crawford so that he can keep Terence happy, but it could be a mistake. Taylor can fight, and he would be bad news for Crawford. 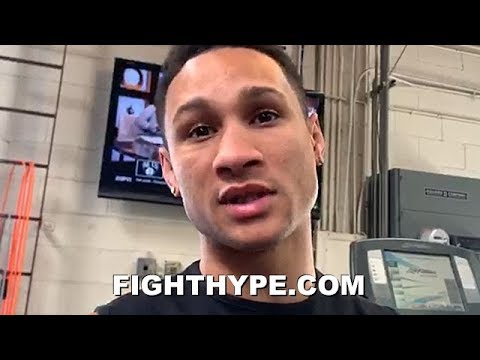