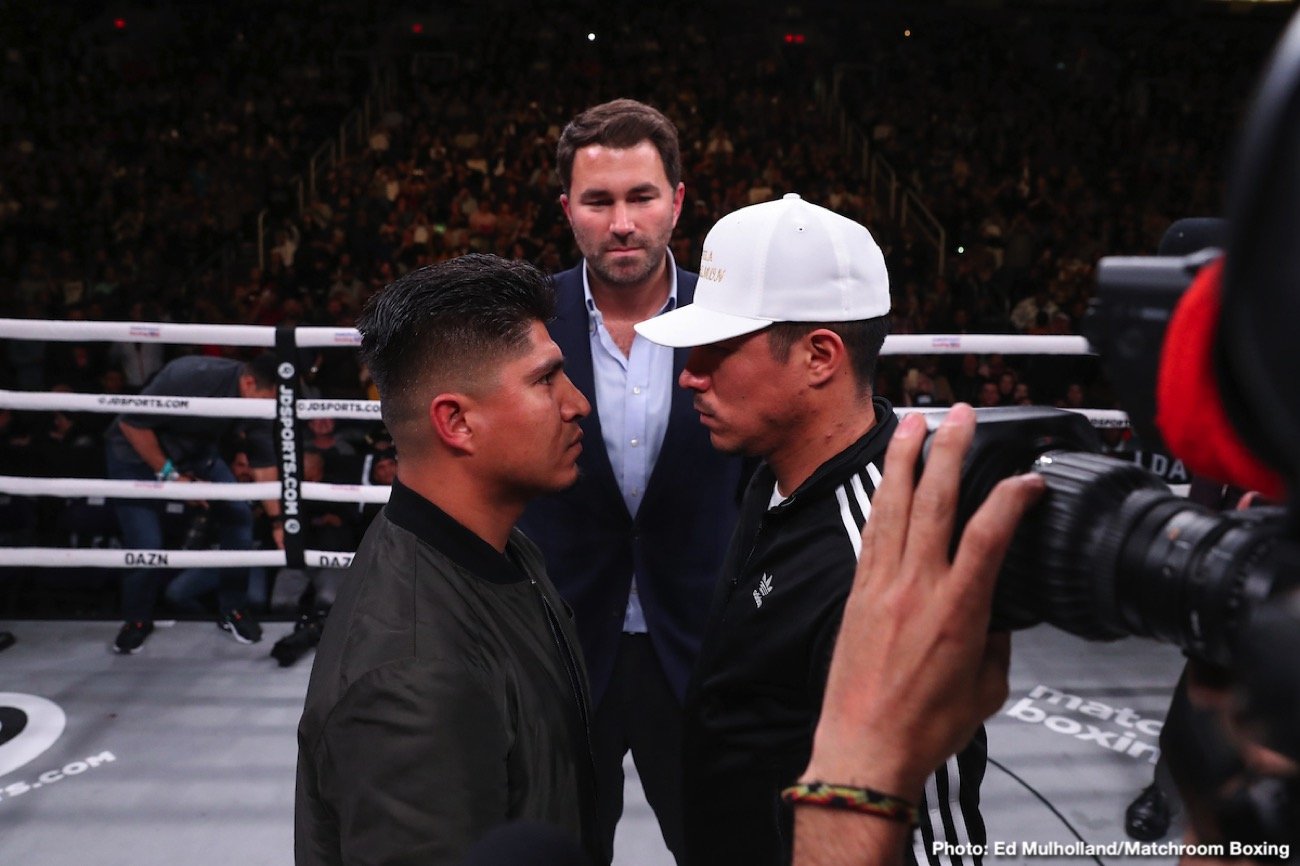 By Chris Williams: Mikey Garcia (39-1, 30 KOs) is in a position in which he controls his own fate in his fight next month on DAZN against Jessie Vargas (29-2-2, 11 KOs) at The Ford Center at The Star, in Frisco, Texas. Garcia needs an impressive victory over Vargas to get the bigger fights that he’s angling for in 2020.

If Mikey beats the Vargas, his promoter Eddie Hearn says he’s going to go out and try and put together a title fight for him against WBA Super World welterweight champion Manny Pacquiao (62-7-2, 39 KOs) in 2020. The British promoter also mentions Danny Garcia, Errol Spence Jr. and Terence Crawford a fighters that he would like to bring to the DAZN platform to face Mikey.

Mikey Garcia has a lot of options available in 2020

“So now you talk about Terence Crawford, you talk about Manny Pacquiao, you talk about Errol Spence, you talk about Danny Garcia,” said Hearn about possible future options for Mikey. “They’re all people, if they’re contractually available, that you can bring to DAZN to fight Mikey Garcia, and it’s a mega-fight. First he has got get passed Jessie Vargas, who is a friend of ours and DAZN.

Terence Crawford vs. Mikey would be an intriguing fight, but it’s one that it would be difficult to put together. Even if Mikey were willing to agree to fighting the Top Rank promoted Crawford, negotiating the fight could prove to be impossible.

Hearn might be forgetting that Mikey lost to Spence last year, and the fight wasn’t particularly close. Mikey fought in a safety first manner the entire 12 round match, and Spence looked like he wasn’t interested in hurting him.

If Vargas, 30, wins, Hearn says he’ll use the former two division world champion to lure other fighters to DAZN.

Matchroom Boxing promoter Hearn obviously won’t try and match Vargas against Pacquiao if he beats Mikey on February 29. Pacquiao defeated Vargas by a lopsided 12 round unanimous decision in November 2016. There would be scant interest from fans in seeing Pacquiao fight Vargas a second time.

“If Jessie wins, he’s the pawn that we can use to bring other fighters to the platform as well,” said Hearn about popular fighters coming to DAZN. “People say what big fighters do you have. You have to say Mikey Garcia is. He’s probably top five in terms of American draws in boxing. So we got a really good guy there. DAZN is really happy. We now have a foot inside the 147-lb division that we didn’t have before,” said Hearn.

NEWS:   Thurman: Pacquiao has my BELT, I want it back

Vargas isn’t a great pawn to lure fighters to DAZN, because he’s NOT a big name in the United States or in world boxing. Although Vargas has captured 2 division world titles in the past, he was more of a belt holder at 140 and 147. In other words, Vargas didn’t beat anyone that was overly talented for him to win his world titles. For example, Vargas won his WBA light welterweight title by beating Khabib Allakhverdiev by a close 12 round unanimous decision in April 2014.

That was a fight that could have gone the other way, as Allakhverdiev fought well enough to deserve the victory. In 2016, Vargas beat Sadam Ali to pick up the vacant World Boxing Organization welterweight title. For Vargas to be a good pawn to lure other fighters to the DAZN platform, he would need a big fan base, and unfortunately he’s not a big draw.

You can forgive Hearn for not knowing that Vargas doesn’t have a huge fan base, because he’s from the UK and not the U.S. He might have mistakenly through Vargas was a big draw when he signed him to his Matchroom Boxing USA stable.

Hearn will push for Pacquiao fight if Mikey beats Vargas

“Mikey is a very stubborn guy. You tell him, ‘He can’t,’ and that’s a major problem,” said Hearn on Mikey not wanting to give up on 147-lb division. “He’s got a bee in his bonnet that people feel that it was a bad decision, and that he shouldn’t have moved up to 147.

“He had problems in that fight in the build up to that fight, which he told me about, that you never tell other people about, because you don’t want to make excuses, but it doesn’t mean he would have beaten Errol Spence,” said Hearn about Mikey.

Hearn doesn’t say what problems Mikey had leading up to his fight against Errol Spence Jr. last year, but it probably wouldn’t have mattered even if he were problem-free. The reason Mikey lost the fight to Spence is he lacked the size, power and the overall boxing ability to win. Mikey’s punching power in the lower weight classes has allowed him to get away with having a low punch output.

Against Spence, Mikey was exposed in that regard. For Mikey to have been competitive with Errol, he needed a high volume offense, but that’s not that type of fighter. A guy that you can compare Mikey to in terms of his low punch output is Adrien Broner. When ‘The Problem’ Broner fought at super featherweight and lightweight, he was able to get away with having a low punch output.

Mikey wants to prove he can fight at 147

“I just feel like he wants to prove that he can do it at 147,” said Hearn on Mikey. “Jessie Vargas is actually a big welterweight. He was someone at 154, that was making his way to 154. Pacquiao is a smaller welterweight. I think Pacquiao vs. Mikey Garcia is a great fight stylistically.

“If Mikey wins that fight, then I’ll absolutely be trying to make the Manny Pacquiao fight. As a fan, I think that’s an amazing fight. If Mikey can get credibility, and a solid victory at 147 lbs, that really makes that fight even bigger,” said Hearn.

Pacquiao might be willing to take Hearn up on the offer to face Mikey in 2020, but that’ll depend on what his other options are. Mikey obviously is going to need to look good against Vargas, and win the fight without controversy. If Mikey’s win over Vargas questionable, then it’s likely that Pacquiao won’t bother with him.