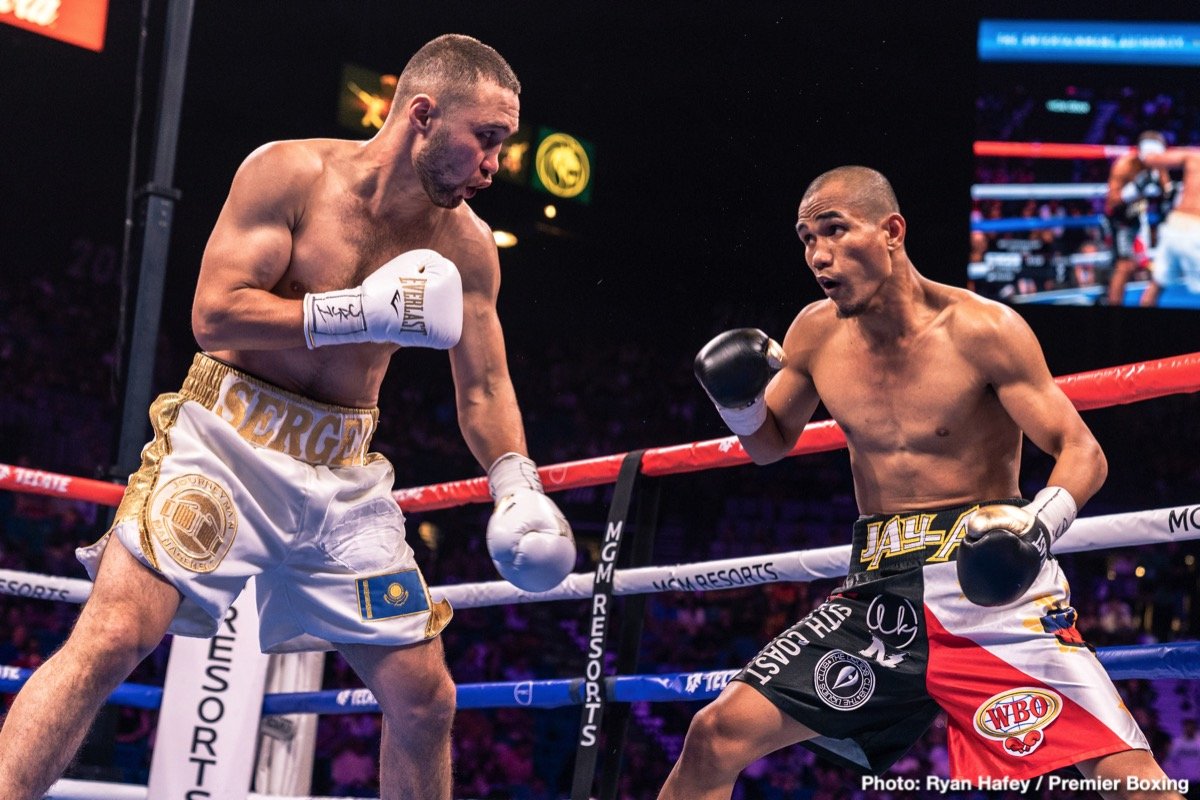 By Dan Ambrose: Unbeaten Kudratillo Abdukakhorov (17-0, 9 KOs) and Sergey Lipinets (16-1, 12 KOs) will reportedly be fighting for the interim IBF welterweight title on the undercard of Deontay Wilder vs. Tyson Fury 2 rematch on February 22 at the MGM Grand in Las Vegas, according to @rangerrollins.

Abdukakhorov, 26, is ranked #1 with the International Boxing Federation at 147. With IBF welterweight champion Errol Spence Jr. out of action due to his car crash, Abdukakhorov and former IBF 140-lb champion Lipinets will fight or the interim IBF 147lb title. The winner of the fight will be the mandatory for Spence.

Abdukakhorov vs. Lipinets is an excellent fight for the Wilder-Fury 2 undercard on ESPN and Fox Sports Pay-Per-View.  The Russian Lipinets, 30, has won his last three fights since losing his IBF welterweight title to Mikey Garcia by a 12 round unanimous decision in March 2018 in San Antonio, Texas.

The fight was a lot closer than the scores handed down by the three judges on the night. They scored it 116-111, 117-110, 117-111. It appeared that Mikey just barely edged it, as Lipinets was walking him down, and nailing him with 2 shots. The pro-Garcia crowd in San Antonio that night might have had an influence on the scoring by the judges, because the fight wasn’t as lopsided as scores.

Since Lipinets’ loss to Mikey, he’s rebounded with wins over the following fighters:

Abdukakhorov, who was born in Uzbekistan and now lives in Malaysia, he defeated former WBA welterweight champion Luis Collazo by a 10 round technical decision last October in Philadelphia. The 38-year-old Collazo suffered a cut over his right eyelid, and the fight had to be halted in the 10th.

Surprisingly, Collazo looked like the better fighter throughout, as he was taking the fight to Abdukakhorov, and nailing him with shots. Abdukakhorov was retreating nonstop, and still getting nailed repeatedly by Collazo. It’s unclear what the judges saw that made them score it for Abdukakhorov.

Most of the punches that he landed were ones that were thrown to try and keep Collazo off of him. In other words, Abdukakhorov threw mainly ‘get off me punches’ and not the type that you see from fighters that are being proactive, and attacking their opponents. Collazo looked like the better fighter on the night by far.

Lipinets will need to be a lot more active against Abdukakhorov than he was in his loss to Mikey if he wants to win the fight, because the judges aren’t going to give it to him if he’s throwing one punch at a time. He’s got a lot to be a lot busier, and he needs to be ready to chase Abdukakhorov around the ring the way Collazo did. Abdukakhorov isn’t going to stand and fight Lipinets, due to his lack of punching power. Abdukakhorov is a finesse level fighter, who wins his fights by out-boxing his opponents with lighter shots.

Abdukakhorov’s best wins to date have come against these guys:

Other than Collazo, the only other notable name on Abdukakhorov’s five-year professional resume is Obara. Abdukakhorov beat him by a 12 round unanimous decision last March in Philadelphia. This was another fight involving Abdukakhorov that was closer than the scores handed down by the judges.