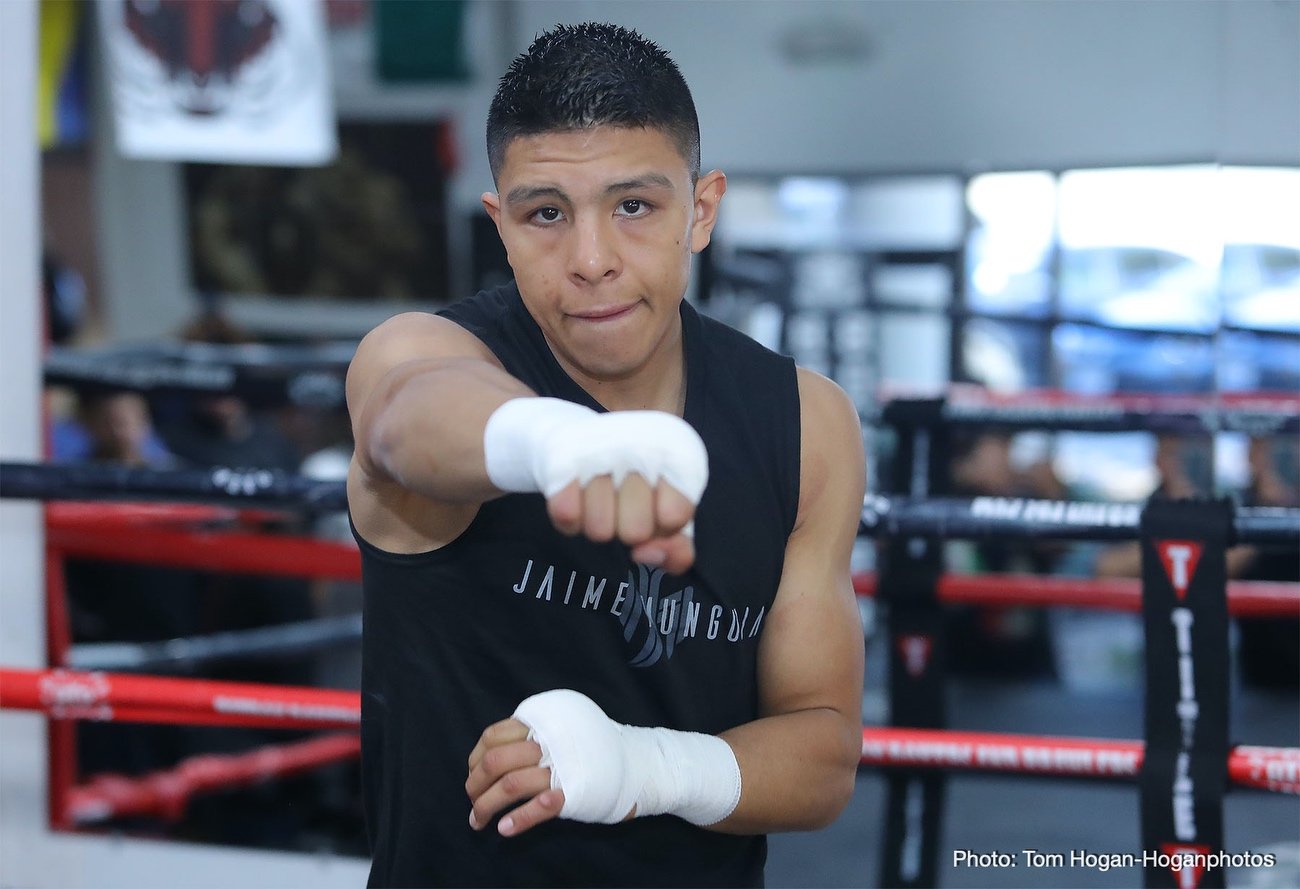 By Barry Holbrook: Jaime Munguia (34-0, 27 KOs) is moving up to 160 for his debut on Saturday night against his tailor-made opponent Gary “Spike” O’Sullivan (30-3, 21 KOs. Munguia, 23, has been struggling to make 154, and he chose to give up his WBO junior middleweight title instead of continuing to drain down from 175 to make weight.

The hard-hitting 35-year-old O’Sullivan faces Munguia this Saturday, January 11 at the The Alamodome in San Antonio, Texas. The fight will be streamed on DAZN.

O’Sullivan lacks the size to fight at middleweight

Munguia will have a big size advantage over O’Sullivan in this fight. O’Sullivan isn’t a middleweight. He’s not even big for the 154-lb division, and he doesn’t have any business fighting at 160, which is why he was selected to face Munguia.

In watching Munguia workout this week, he does look more powerful, and sharp compared to the past. Not having to lose as much weight obviously is a benefit to the hulking 5’11” Munguia.

O’Sullivan is a big puncher, but his chin is shaky and his stamina poor. When he’s faced good opposition, he’s come apart in losses to Chris Eubank Jr., Billy Joe Saunders and David Lemieux. O’Sullivan was embarrassed by the much bigger Lemieux in getting stopped in the 1st round in September 2017. The weight difference between them was HUGE.

Lemieux looked like a super middleweight against a small junior middleweight in O’Sullivan. Near the end of the 1st round, O’Sullivan attempted to throw a right hand, and was nailed by a short left hook by Lemieux and put down. The fight was then stopped, because O’Sullivan didn’t know where he was at.

Munguia’s move up to 160 is overdue

Jaime should have moved up to middleweight a year ago, because he was too big to be fighting at 154. But with the easy title defenses that his promoters at Golden Boy were setting him up with, it made sense to stay.

Some believe that Munguia decided on moving up to 160 due to a number of talented contenders breathing down his next. Had Munguia kept his WBO belt, he would have needed to face these guys in the near future:

There’s a good chance that Munguia would have lost to all of those fighters. Dennis Hogan exposed Munguia in a big way last April in out-boxing him in Monterrey, Mexico. Munguia was given the decision, but the boxing world saw Hogan as the winner. That performance likely had a lot to do with Munguia opting to move up to 160, because there are better fighters than Hogan.

“He’s very strong and has a strong right hand, so we have to be careful,” said Munguia about O’Sullivan. “He’s a fighter that goes forward and throws punches very fast. He’ll suddenly explode with fast combinations, so we have to make sure we’re aware of that with my guard up,” said Munguia.

O’Sullivan, who comes from Ireland, has a lot of knockouts on his 12-year professional record, but the wins have come against 2nd tier opposition.

O’Sullivan’s best wins have come against these fighters:

Those are lesser fighters, and it wasn’t unexpected that O’Sullivan stopped the majority of them. O’Sullivan has world class punching power, but not the chin, stamina or the size to be fighting the elite level guys. At 160, O’Sullivan doesn’t belong at all in this division. He likely chooses to fight at middleweight because the paydays are better, but he has no shot of beating the more talented fighters.

Munguia should have an easy time winning on Saturday, but there’s a small chance he could run into something big early if O’Sullivan comes out firing on all cylinders.


« Kalle Sauerland on Andy Ruiz Jr: “I don’t see an easy way back for him”