‘I see Fury knocking Wilder the spark out’ – Dave Allen

By Charles Brun: Heavyweight David Allen is predicting a knockout win for Tyson Fury in his rematch with Deontay Wilder next month on February 22. Allen (17-5-2, 14 KOs) is one of many people who feel that the knockout artist WBC heavyweight champion Wilder (42-0-1, 41 KOs) will be knocked out by the lighter hitting Fury, who ISN’T a KO artist.

For some reason, boxing fans, promoters at former fighters believe that Fury will stop Wilder. It goes against common sense though, but if someone is going to make a pick, it makes them look like a genius if they’re right.

Allen is fighting next month against an opponent still to be determined on February 8 at the Sheffield Arena in Sheffield, England. He’s fighting on the Kell Brook (38-2, 26 KOs) vs. Mark DeLuca (24-1, 13 KOs) card on DAZN and Sky Sports.

“Tyson has got to get passed Deontay Wilder, which is not a given,” said Allen to Behind The Gloves. “I think that’s a 50-50. I can see the outcome of that fight, and I can see Wilder winning on points, and I can see Tyson stopping Wilder. In the first fight, everyone was saying that Tyson won 10 rounds, and Wilder only won two that he dropped him.

“There were many rounds in that fight that were close,” said Allen on the first Wilder vs. Fury fight. “I thought Tyson won by a round or two, but the draw for me was inconceivable. Everyone knows that Tyson is a friend of mine. I’m a big friend of him, but Wilder is much better than people think.

“In America, Tyson is negative, he’s feinting, and throwing the jab,” said Allen. “I can see Wilder winning on points. By the same token, I can see Tyson Fury knocking Wilder the spark out as well. Tyson can punch a lot harder than people think. It’s an intriguing one as well. Both men have a massive task before they can even think about Joshua, and Joshua has to beat Pulev, which isn’t a walk in the park,” said Allen.

Fans see Wilder vs Fury 2 as a 50-50 fight, as their previous fight ended in a 12 round draw in December 2018. A lot of boxing fans thought Fury dominated the fight, and should have been given the decision. However, those fans were giving Fury credit for making Wilder miss a lot, and they weren’t keeping track of all the shots he was still getting hit with.

Tyson Fury is a natural

“Fury-Joshua excites me. That’s the biggest fight in boxing,” said Allen. “This is the biggest fight in British boxing history, I believe. I’ve got to back my friend Tyson, but I wouldn’t do it with any amount of confidence, because Joshua-Ruiz 2, he showed he’s a really talented fighter. First of all, Ben Davison is a very smart man, and very clever.

“I’ve been in his camps sparring, and I’ve seen what he’s all about,” said Allen about Fury and Joshua. “I hear him talk really well. He knows his stuff,” said Allen about Davison. “What I will say is Tyson went from Peter [Fury] after the Klitschko performance. he got a new coach, albeit years later, and performed equally as well.

“Everyone was saying is ‘why would you leave Peter for a young kid that no one knows about?’ That worked out perfectly fine,” Allen continued about Davison. “I can train Tyson. He’s a natural. You get him fit effectively, and watch him go. I’m not taking nothing away from those coaches in the past, but he’s such a natural. But the answer is we don’t know until February 22nd, I guess,” said Allen.

Fury basically trains himself. The coaches are there to help Fury with his conditioning, but he’s the one that is in control of the actual boxing combat.  Losing Ben Davison as a trainer isn’t a big deal for Fury, because nothing changes. Davison helped Fury with his weight loss, but that’s about it.

Although Wilder missed a lot, he still landed just as many punches as Fury. Given that Wilder’s shots were far harder, it’s understandable why the judges scored it a draw.

“I think I last sparred Joshua in late 2015, maybe,” said Allen. “I sparred Tyson last year. In 2015, Tyson was the much better all around fighter. Joshua after Ruiz 1 won, I personally didn’t see him coming back to beat Ruiz. He came back for Ruiz 2 and was exceptional.

“He was great, boxed well, and used his feet. And he out-fought, out-smarted and out-maneuvered Ruiz,” said Allen about Joshua. “I thought Ruiz was a fat lad, but the skill level of Ruiz was high. He could fight,” said Allen.

What Allen didn’t factor in when he assumed Andy Ruiz Jr. (33-2, 22 KOs( would beat Joshua in the rematch was the conditioning aspect. Ruiz Jr. was like a big kid let loose in a candy store when he got $5 million for his first fight with Joshua.

Already fat to begin with, Ruiz Jr. lived it up, partying, eating a lot, and not training.  He ended up gaining 15 lbs, and wasn’t in shape to have a chance of retaining his IBF/WBA/WBO heavyweight titles in his rematch.

It would be interesting to see how an in shape Ruiz Jr. would do against Joshua in a trilogy fight, but that match may never happen.  Ruiz got even more money for his rematch with Joshua on December 7, and he may find it difficult to find motivation now to train knowing that he’s already set for life financially.

Dubois will be world champion in 4 to 5 years – Allen

“I sparred both men. I sparred Daniel [Dubois] years ago, and he was only a kid at the time,” said David Allen to Behind The Gloves. “His jab is like a right hand, and he’s got an aura about him. He’s so quiet, well spoken, and to the point. It’s a bit intimidating to be honest. He’s a big scary, and he’s super strong and can punch. And he can box very, very well.

“He’s clever, and his feet are good, and he’s fast of hand,” said Allen about Dubois. “He is basic. I think Daniel Dubois will be heavyweight champion of the world one day in four or five years time. Joe Joyce, however. I never fought him, but got a lot of rounds in. He’s a strong, strong man, and he’s tough, he’s game, and he can punch a little bit. And he’s very awkward,” said Allen about Joyce.

The 34-year-old Joe Joyce (10-0, 9 KOs) needs a win over Dubois to out him in position to fight for a world title. Joyce has got take the gamble because he’s not young enough to slowly work his way up the ranks like Dubois.

It’s still too early to predict accurately whether heavyweight Daniel Dubois (14-0, 13 KOs) will become a world champion in 4 to 5 years. He’s 22-years-old now, and there are other heavyweights that will come along the pipeline from around the world, and many of them will have equal power, and better size. Dubois isn’t the fastest guy, and he’s easy to hit.

“Right now, I think it’s 50-50 fight now,” said Allen about the Dubois vs. Joyce fight. “I think in 3 or 4 years time, Dubois will be at the top of the tree. If your going to fight Dubois, do it now. I would edge towards Daniel, because he’s been looking fantastic.

“Bryant Jennings showed a few chinks in his armor, but Bryant Jennings can fight,” said Allen about Joyce’s fight with Jennings. “It’ very interesting. I hope it happens as a fan. For Daniel, it could be too. At 22-years-old, I would be looking at him. I wouldn’t rush him. And I would be holding him back a little bit, because he has so much time.

“I think he can become heavyweight champion of the world sometime day. The only thing that can stop him is an early career defeat that’s going to knock your confidence. I’m not in charge. Frank Warren knows a little bit more than me. Yeah, I’d love to see it,” said Allen.

This could be a 50-50 fight if Joyce is able to handle the power of Dubois, and wear him down with his volume punching. Dubois hasn’t had a big opponent that has been able to stay in there with him and put hands on him. In a war of attrition, Dubois could prove to be vulnerable if he gets dragged into the deep rounds by Joyce.

It works in Joyce’s favor that he’s coming off of a grueling 12 round war against Bryant Jennings on July 13. Dubois hasn’t had that kind of a fight due to the soft match-making that’s been done for him by his promoter.

“At the time the [Michael] Zerafa fight was a little disappointing and underwhelming, but he’s gone on to middleweight to beat Jeff Horn,” said Allen about Kell Brook. “He’s turned out to be quite the fighter, Zerafa. He’s improved obviously, but at this point with Kell’s time out, DeLuca is not a gimme. DeLuca is not bad. No one has never heard of him, but he’s not a bad fighter at all.

“I saw Kell yesterday, and he looked fantastic,” said Allen. “He looked as good as I’ve seen him for a long time. Does he beat [Errol] Spence in a rematch or [Terence] Crawford and go to light middle and compete there?

“I’m not so sure at this stage of his career with the time out, and the age,” said Allen on Brook. “He’s not going to be getting any better. Kell is an exceptional talent, and one of the best talents we’ve produced in the last 10 years.

“A natural talent and an unbelievable fighter,” Allen continued about Brook. “Is his time gone? Maybe, I don’t know. Is it fair for me to talk about a man with much more ability than me? I hope so. I hope he brings many more nights in Sheffield.

It’s been over a year since Brook last fought against Michael Zerafa in December 2018, and he didn’t look good in that fight. DeLuca is slow, limited and not true world class fighter. That works in Brook’s favor, but his inactivity could hurt him in this fight. 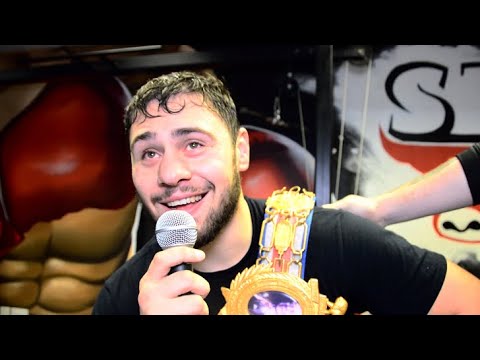 
« Gervonta Davis’ next fight to be on pay-per-view, possibly against Leo Santa Cruz

Kalle Sauerland on Andy Ruiz Jr: “I don’t see an easy way back for him” »