David Haye: ‘Deontay Wilder is the HARDEST punching heavyweight ever’ 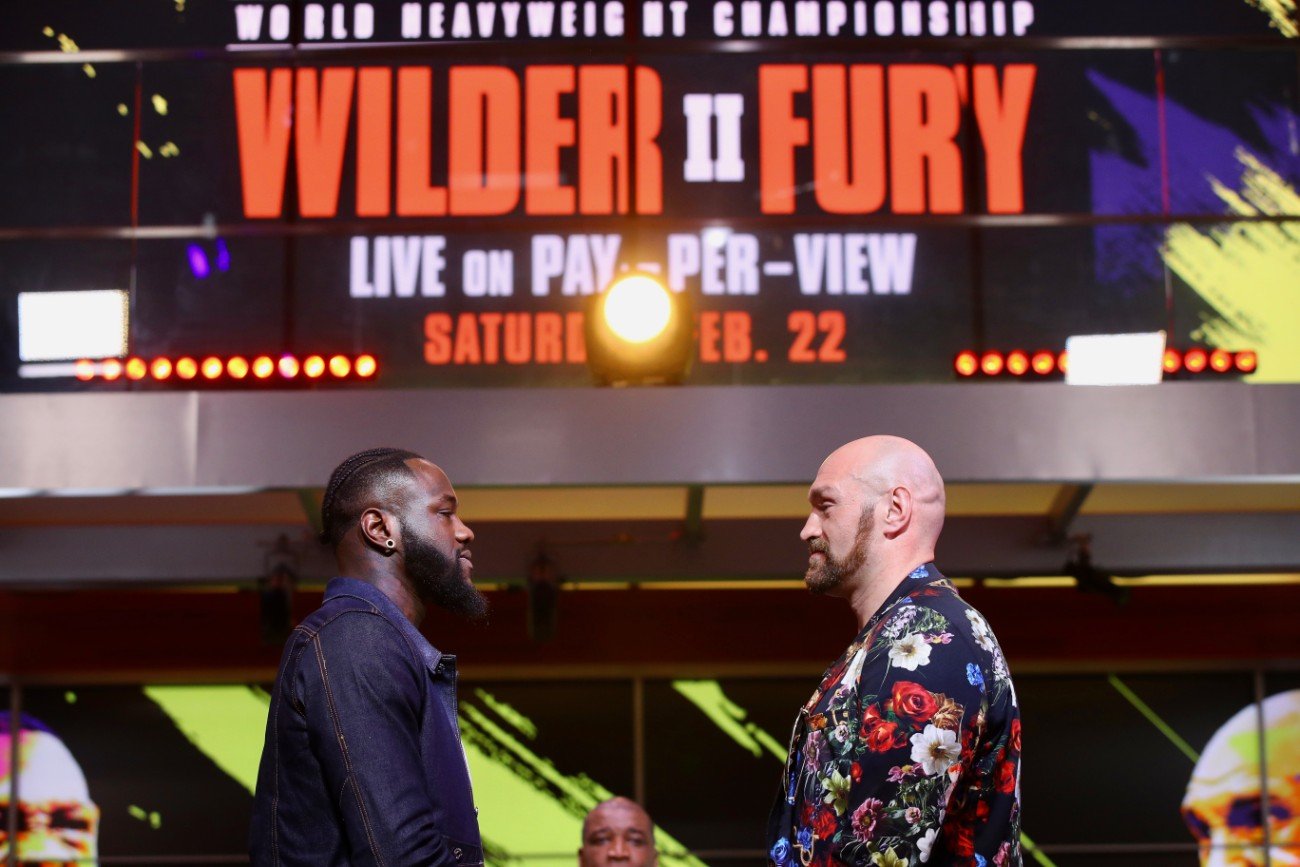 By Tim Royner: David Haye rates Deontay Wilder as the hardest punching heavyweight in the history of boxing, and he’s picking him to defeat Tyson Fury by knockout on February 22. Like a lot of fans, Haye thinks Fury (29-0-1, 20 KOs) has picked the worst time to change out trainer Ben Davison in favor of coaching combination of Sugarhill Steward and Andy Lee.

Wilder impressed Haye while sparring with him

Haye remembers sparring Wilder (42-0-1, 41 KOs) many years ago, and being awed by his punching power. After getting hit with some glancing blows from Wilder, who was wearing 18-oz gloves at the time, Haye says his power was harder than the flush shots he’d been hit with in his fight against Wladimir Klitschko in 2011.

Haye came away from the experience of sparring with Wilder believing him to be someone that make waves in the sport one day. Sure enough, Haye was correct with his prediction, as Wilder captured the WBC heavyweight title in 2015 in beating Bermane Stiverne.

Wilder has held his WBC title for the last five years, and is the longest reigning heavyweight on the planet. Thus far, he’s defended his WBC belt nine times without a loss.

On February 22, Wilder will be making his 10th title defense of his WBC belt against Fury in a rematch at the MGM Grand Garden Arena in Las Vegas, Nevada. The fight will be shown on ESPN and Fox Sports Pay-Per-View.

“In the first fight, we saw Tyson Fury at his best. So now the fact that he’s changed his coach so close against a guy had his worst time the last time around, I’m going with Deontay Wilder by stoppage,” said Haye to IFL TV.

There’s clearly worry on Fury’s part for him to be dumping Davison at this point in their working relationship. Davison did a fine job with Fury in helping lose the weight he’d put on during his 2 1/2 years away from the spot, and he guided him well in his five fights since making his comeback.

Although Fury failed to get the victory in his match against Wilder in 2018, he fought well enough to deserve the victory. There was some negative feedback from boxing fans after Fury struggled in his last fight against Otto Wallin in September last year. They feel that Fury should have been able to dispatch the previously unbeaten Swedish heavyweight Wallin with ease, but instead Tyson struggled to win.

He suffered a bad cut in the third, and he had to labor hard for the victory. In the aftermath of the fight, Davison was blamed by some for why Fury had problems. The reality is that Fury would have always had problems against a good heavyweight like the 6’6″ Wallin, who had the size, youth and the aggressiveness to give him problems.

“I truly think he’s the hardest punching heavyweight ever,” said Haye on Deontay. “That’s not an exaggeration. I got hit by Wilder in sparring, and I’ve been hit by Wladimir Klitschko on the chin with 10 ounce gloves.

“There was more effect with Wilder hitting me on the top of my head with 18 ounce gloves on, and me wearing a head guard,” said Haye about his sparring With Wilder. “It wasn’t even hitting me clean. They were just glancing, and I felt that more. I remember thinking after I sparred with him, ‘This is a guy is going to do something.’ Wilder was all over the place, but the power.

“The fact that no one really mentions is Deontay Wilder’s punch resistance. I’ve never heard anyone say he can take a shot. He can take a shot. I’ve given him some big [punches], and I’ve buzzed him a bit, and he’s been back wanting more,” said Haye on Wilder’s power.

“I’m like ‘whoa.’ Not only does he have a good chin, but his recovery power is great. Most people you hit them with one shot, and their legs go a bit, and they’re not quite the same. They step back and it takes them a couple of rounds to get it. He’s [Wilder] straight back on it.

“I remember thinking, ‘He can punch, and he can take a shot,’” said Haye on Wilder. “Once he gets his technique up to scratch, which it is now. He’s the heavyweight champion of the world. I always knew from then, this kid at the time is going to be something very, very special,” said Haye.

In the minds of a lot of fans, Wilder has poor punch resistance, and can be easily knocked out. They point out that Wilder has been wobbled a number of times during his career, even against poor heavyweights. Nevertheless, Wilder has taken huge shots from punchers like Stiverne, Luis Ortiz and Chris Arreola and not gone down. That says a lot about Wilder’s ability to take a punch.

Davison: Tyson knows he has to respect Wilder’s right hand for 12 rounds

“There were rounds where Wilder couldn’t land, and then he found,” said Fury’s former coach Ben Davison to IFL TV.

“I think Tyson now knows that ‘I have to respect that right hand for 12 rounds no matter what.’ So if he can just take that, and add that to his next performance, I believe he wins,” said Davison.

Tyson knowing that he has to avoid getting hit by Wilder’s right hand for 12 rounds, and actually doing that are two different things. The fact that Fury wants to be more offensive-minded in the rematch with Wilder means he’s going to be in range for his right hand. If Fury still had Davison as his trainer, his chances of avoiding Wilder’s big right hand eraser punch would be improved.

Davison teaches his fighters to be cautious on defense, and use movement. But Fury now with Sugarhill and Andy Lee, those two coaches are likely going to have him taking the fight to Wilder. That could spell trouble for Fury, because he’ll be walking straight into Wilder’s right hands if he attempts to sit down on his shots the way Lee and Sugarhill want him to.

If Fury tries to mug Wilder on the inside to smother his power, he’s going to get hit with clubbing shot. Wilder is powerful when throwing shots too. 6’7″ Kelvin Price attempted to smother Wilder’s power by fighting him on the inside in 2012, and he was staggered after getting hit hard by several clubbing right hands.

Fury must be careful about his tendencies against Wilder says Davison

“There’s a point here that I wasn’t going to mention, but I know that Tyson is aware of it, because we spoke about it before the fight,” said Davison. “Fighters have habits and tendencies, and that’s what you look for as a trainer.

“If you do something too often and for too long, you’ll be made to pay for it,” said Davison. “What Wilder will do is bounce on the spot, and it’s a mental reset, and something that Tyson does. When Tyson touches his face, and wipes his nose, I know that Wilder’s team works on it when to throw.

“Something happened at the end of the 8th round when Tyson got hit by a right hand at the top of his head,” said Davison. “He wiped his nose, touched his face.

It was a little bit of a reset, and this is actually what he did in the 12th round.
“That’s why when there was space behind Tyson for him to step into, and take the distance away, he didn’t do it,” said Davison.

“I believe it was a single lapse of concentration, because of that habit. But it’s something to be aware of because he had a little reset where he moves his feet, and changes his position, and then it takes it away. That’s something Wilder’s team is aware of and working on,” said Davison.

It’s possible that Davison is seeing something that’s not there about Wilder supposedly keying on Fury’s tendencies in their first fight, and taking advantage of them in the 12th.

The likely reason why Wilder dropped Fury in the 12th wasn’t because he’d picked up on his tendencies. It was more of a case of Fury standing directly in front of him.