By Chris Williams: Mikey Garcia says it’s still too early for a fight between Terence Crawford and Errol Spence Jr. to get made because neither guy sells well on their own. There’s not enough money to be made with the promoters, networks and the fighters.

On the surface, Garcia (39-1, 30 KOs) could be perceived by some as still having hard feelings towards Spence after his one-sided 12 round decision loss to him last year. Garcia brings up some good points about whether it’s still too early to make the Spence vs. Crawford fight.

Right off the bat, Spence needs to show that he’s still the same fighter he was before his car crash, because he didn’t sound right during his recent interview with Fox Sports. He was slurring his words, and looked beaten up from his October 10 car crash in Dallas.

Mikey doubts Spence vs. Crawford gets made

“I want to see Spence back first to see how the accident affected him,” said Mikey Garcia to Fighthype. “It’s hard to say now because we haven’t seen him in the ring. What if he isn’t the same? He doesn’t have the same reflexes or he can’t take a punch as well. When he comes back, I’d like to see him back first before fighting anyone that’s a serious threat.

“I still don’t know if that fight will ever happen because of the different alliances, different promotional companies and different networks,” said Mikey about a fight between Spence and Terence Crawford. “And I think that’s a fight that is difficult to produce. I know Crawford would love the fight. He’s a fighter. I know Spence would take the fight too,” said Mikey.

“It’s not just what they want. There’s network interest, promotional interest,” said Mikey. You’ve got to look at the business first. When fights between different fighters with different promoters and different networks get made, one of the reasons they get made is there’s so much interest and so much money. Everyone says, F— it, let’s share, but we’ll still make a lot of money,” said Mikey.

Unfortunately, Crawford seems really needy right now with the way he’s badgering, pushing for a fight as if his career depends on. Terence wasn’t doing this before, was he? All of a sudden he’s sounding like a modern day Rip Van Winkle, having woken up from a 20-year sleep, realizing that he’s missed out on a lot of things in his life.

Wilder vs. Fury 2 was big enough to make

“[With] Wilder-Fury. They’ll be doing ESPN and Fox for this upcoming show on the 22nd of February,” said Mikey.”So Wilder is fighting for PBC on Fox. Fury is with Top Rank for the last year or so, and he’s doing ESPN. But the first fight was such a big fight, and I’m sure they’re expecting a big turnout for the second one. With all that money being involved, the promotional companies are willing to work together to make it happen,” said Mikey.

There’s a big difference between Spence and Crawford with their ability to market their fights compared to Deontay Wilder and Tyson Fury. Crawford and Spence are both laid guys who look tired, and talk quietly.

They don’t do a lot of trash talking, and they seem like the type that don’t want to make waves. In the case of Wilder and Fury, they’re both charismatic and like to boast about themselves. Spence and Crawford aren’t like that, and they can’t be transformed even with coaching. As a result, Crawford and Spence aren’t going to be able to sell their fight to casual boxing fans who have never heard of them before.

Spence is better off facing all the top PBC fighters before he turns his attention to Crawford. If Spence can beat all the best PBC guys first, then he should face Crawford. As for Crawford, he needs to do something drastic to increase his popularity. Fighting 140-pounders like Jose Ramirez, Josh Taylor and Regis Prograis might not be good enough.

Crawford needs to move up to 154 or 160, and take on Jermall Charlo, Jermell Charlo, Julian Williams and Demetrius Andrade. By the time Crawford is through with those guys, he’ll be popular enough for a fight between him and Spence to be huge.

“When you have Crawford, who unfortunately doesn’t sell that well,” said Mikey. “Spence on his own doesn’t sell that well. It doesn’t seem like there’s enough interest from the promotional companies to make that fight happen, because there’s not a whole lot of money involved. I’m sure the fight would be a great fight, but on paper, it doesn’t show the finances.

“It doesn’t make sense yet,” said Mikey on the Crawford vs. Spence fight. “Maybe in the future after another victory or two. After we see Spence back, and he’s completely recovered, then maybe. Until they pick up their numbers on their own, it’s harder to make those kinds of fights.

“You have Pacquiao-Mayweather, six years in the making, and different networks, different promotional companies, making it a lot more difficult to get it done.

“There was so much money involved that they finally came to an agreement,” said Mikey about the Mayweather vs. Pacquiao fight. “They decided to put their differences to the side, and get the fight done, but that’s because there’s so much money.

“There’s not that much money, and they’re making money on their own. Do the promotional companies make very good money each individual fight on their own, then there’s no need for them to face each other,” said Mikey.

Garcia brings up some good points about the Spence-Crawford not making sense right now. He’s not saying the fight won’t ever make sense. Right now, he feels that there’s not enough demand by boxing fans in seeing Spence and Crawford fight, and he might be right.

Look at the guys Crawford has been fighting for the past 10 years. He’s never fought anyone really talented other than Yuriorkis Gamboa, and he fought him when he was already on the slide. 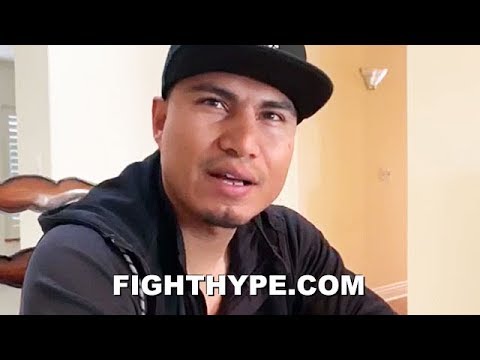