Canelo Alvarez vs. Billy Joe Saunders would be at 168 – says Eddy Reynoso 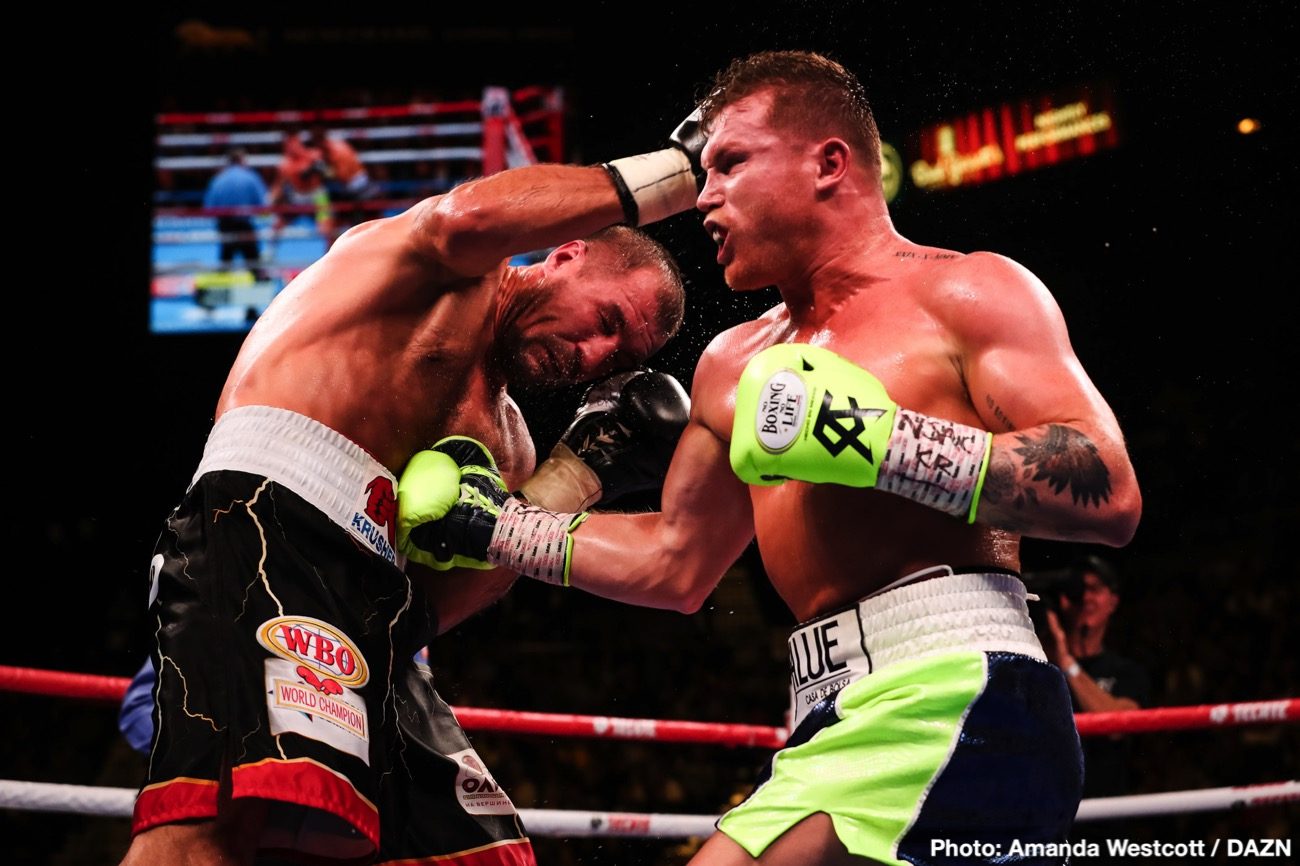 By Sean Jones: Trainer Eddy Reynoso says a fight between Canelo Alvarez and Billy Joe Saunders are the type that they like because it’s “complicated” to face him. Reynoso says that if Canelo fights Saunders, it would be at 168 for his WBO super middleweight title.

Alvarez will be fighting on May 2 on the Cinco de Mayo holiday weekend, and he needs an opponent. With it being January, Golden Boy Promotions, along with Reynoso, need to pick someone quickly. Reynoso’s face lit up in an interview with Fighthub when he was asked about the possibility of Canelo fighting Saunders. It’s believed that Canelo only has 2 options for his next fight, and that’s Saunders or Callum Smith.

Saunders is seen as the weaker of the two, and easier job for Canelo. Smith, 6’3″, is a big puncher, who for all intents and purposes, is a light heavyweight with major power. Although it would be a winnable fight for Canelo against Callum, there’s a good chance he would lose to him. Saunder is a different story. He can’t punch, and he’s basically just a spoiler.

Canelo will be moving down from 175, according to Reynoso. He won’t be staying at light heavyweight, since he’s already vacated his WBO title in that weight class. Saunders (29-0, 14 KOs) hasn’t been officially picked out for Canelo’s next fight

Canelo would fight Saunders at 168 – Reynoso

“Super middleweight, Saunders can’t make 160 anymore,” said Reynoso when asked what weight Canelo would fight Saunders if he’s the next opponent. “We can fight at 160 of 168, but with Saunders, it would be at 168, because he’s the WBO champion. So we will see what happens.

“Yeah, it is, but those are the fights that we like and want; complicated ones so that we can win them,” said Reynoso when is Saunders is a ‘tough fight’ for Canelo.

It doesn’t make any sense for Canelo to fight Saunders at any weight other than 168. It’s not as if Saunders is more vulnerable at 160 than he already is at 168. He’s shown already that he can’t punch in either weight class.

Reynoso says Alvarez (53-1-2, 36 KOs) WON’T fight IBF/WBC light heavyweight champion Artur Beterbiev or any other fighter at 175 pound division for his next fight on May 2. Reynoso makes it 100% clear that Canelo will be moving down to either 160 or 168 for his next fight.

When Reynoso was asked if Canelo would be interested in sticking around 175 to face the undefeated Beterbiev (15-0, 15 KOs), he told Fighthub, “No, no, no, why? Why are you going to fool the people or ourselves?”

It’s unclear what precisely Reynoso meant by saying what he said about fooling the people. Just recently, Reynoso defended the choice of Canelo choosing to fight the past his best WBO 175-lb champion Sergey Kovalev on November 2 by saying that the 36-year-old is the best fighter at light heavyweight. Unfortunately, Kovalev didn’t fight like he was the best fighter in the division in getting knocked out by the 5’8″ Canelo.

For that matter, Kovalev didn’t fight like he was the 10th best fighter at 175. He fought terribly, and some believe he intentionally took it easy on Canelo due to his gratitude in being picked by him for a huge payday.

“Kovalev is better than Beterbiev. That’s the reason why we’re fighting him on Saturday. So why wouldn’t we fight him [Beterbiev],”

“Yes, there’s lots of good comments. Sure, like in all sports, there’s always negative people with everything,” said Reynoso to Fighthub about Canelo’s win over Kovalev. “We take the positive, which was 95% of people supporting us, and see his accomplishments as something great. So we stick with those people, and ignore the negative people,” said Reynoso.

“Well, people say a lot of stuff, but really, you got to see who is saying this stuff,” said Reynoso in reacting to some boxing fans saying Canelo vs. Kovalev was a fixed fight. “It’s just dumb s—, to be honest. Of course, it’s stupid.”

The reason why some boxing fans thought Canelo-Kovalev was a fixed fight is because of how little energy Kovalev had, and how he appeared to be fighting in 1st gear. These are fans that have seen Kovalev fight many times, and they remembered how previous match against Anthony Yarde last August. Kovalev looked powerful in that fight, which took place just three months before the Canelo fight in November.

The casual boxing fans that had never seen Kovalev fight before were obviously supportive of Canelo after his win, but the reaction was different from fans that have seen Sergey fight before.

“No, 175 is not his division,” said Reynoso when asked if Canelo will stay at light heavyweight or move back down in weight. “He has to fight at 160 or 168. This was a challenge like we announced in the beginning.

“The challenge could have been advantageous to us or bit us in the backside,” said Reynoso about Canelo moving up to 175 for the Kovalev fight. “In this case, it worked for us, and we won the fight, and he got another title,” Reynoso said about Canelo. “But that’s not to say we’re going to start giving away advantages at 175. Canelo is a 160 and 168 fighter, and he will fight whoever at that weight,: said Reynoso.

Despite Reynoso saying that Canelo might stay at 175 before his fight with Kovalev, he’s now making it clear that he won’t be fighting at light heavyweight.

There’s no records for Canelo to break in his next fight unless he’s talking about his own personal record. Canelo has already won world titles at 154 160, 168 and 175. Beating WBO super middleweight champion Saunders won’t break records for Canelo, because he already captured a title at 168 in beating former WBA ‘regular’ champion Rocky Fielding in 2018. The only way Canelo breaks records is if he moves up to cruiserweight, and captures a world title in that division. But that would be a personal record, not a true record breaking situation. Unfortunately, there’s no fluff champions at cruiserweight that Canelo would have a good shot at beating.

Things could have ended badly for Canelo if Kovalev let his hands go, and fought with the same energy that he showed in his previous fight against Yarde. It also could have ended badly for Canelo if he chose one of the good light heavyweight champions like Beterbiev, WBA champ Dmitry Bivol or WBA ‘regular’ champion Jean Pascal. All three of those fighters would likely beat Canelo quite easily.

“Yes, in May,” said Reynoso when asked if Canelo will be back in action in May. ‘We got to see who is next with the people at Golden Boy and DAZN, and see what’s next. No, the relationship with Golden Boy is a business one, and that’s it. We have an agreement with them, and we have to go through with it. Yes, just business and that’s it,” said Reynoso.

It’s pretty obvious from the way that Reynoso is speaking that the light hitting Saunders is in the pole position to get the fight with Canelo. As I mentioned, Callum is basically a light heavyweight in terms of power and size. Canelo looked terrible against the over-the-hill Kovalev. Even if Callum fights as bad as he did in his last title defense against John Ryder, he beats Canelo. 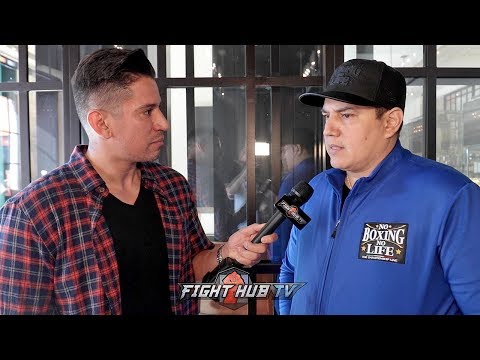 Gennadiy Golovkin begins training at SNAC for next fight in March »