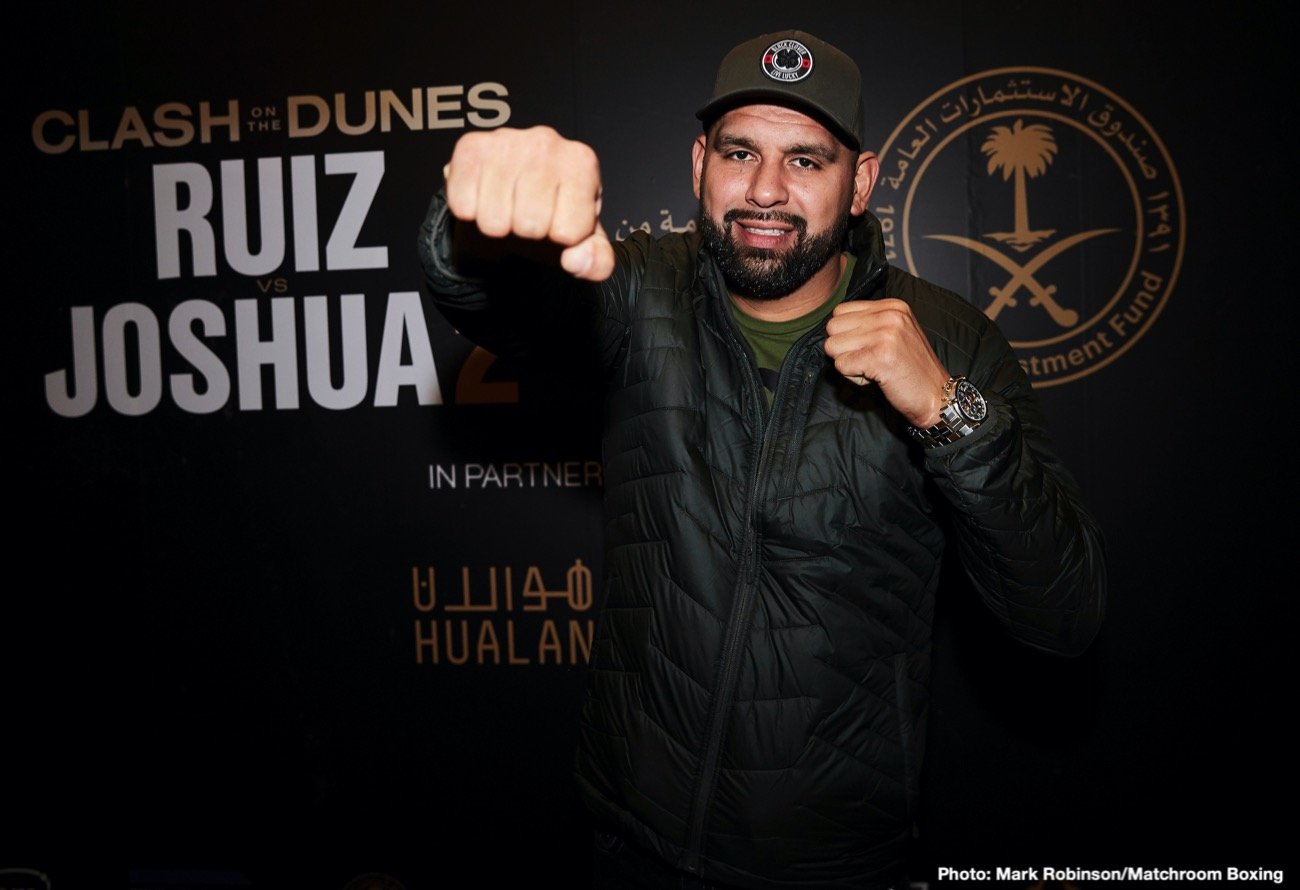 By Tim Royner: Eric Molina has been in with heavyweights Deontay Wilder and Anthony Joshua in the past, and he believes that the ‘Bronze Bomber’ would spark AJ out within 3 to 5 rounds if that fight happens. Molina has tasted the power of these two giant heavyweights, and he rates Wilder as the bigger puncher and the more dangerous guy.

Both fighters stopped Molina (27-5, 19 KOs) in the past, but the outcome of those fights didn’t give boxing fans a hint of who would win in a match between Deontay and Joshua.

AJ in a must win situation against Ruiz

Joshua (22-1, 21 KOs) needs to take care of business in his rematch this Saturday against Andy Ruiz Jr. (33-1, 22 KOs) for him to face Wilder, since there’s no point in thinking beyond this match. If Joshua loses again, then he’ll need to be dropped down a level against lesser opposition.

Joshua can’t be put in with Wilder after a second knockout loss to Ruiz. That would be an insane move on Joshua’s part to face Wilder after 2 consecutive stoppage losses to Andy. IBF/WBA/WBO heavyweight champion Ruiz defends against Joshua at the Diriyah Arena, in Diriyah, Saudi Arabia.

The fight will be streamed on DAZN in the States, and shown on Sky Sports Box Office in the UK.

The 37-year-old Molina is battling heavyweight fringe contender Filip Hrgovic (9-0, 7 KOs) in a 12 round bout on the Joshua-Ruiz 2 undercard.

Wilder would have no problems with Joshua says Molina

“I have to say that Wilder, you can take him to a zoo, and there’s not an animal that he won’t knock out. Wilder will knockout anybody, and until you see him not do that, you have to assume that he will. I say that Deontay Wilder defeats Anthony Joshua between 3 to 5 rounds.

“AJ’s style for me brings me problems, but it won’t bring no problems for Wilder. I have to say about Wilder, until he shows that he can’t turn someone’s lights out at any given moment of any given round of any given fight, you have to assume that he can do that,” said Molina.

Joshua would force Wilder to let his hands go immediately in the first round, and could see a fast stoppage. Wilder wouldn’t be able to fight cautiously like he did in his fights against Luis Ortiz, Artur Szpilka and Gerald Washington. He would need to come out with both guns blazing like he did in his 1st round knockout win over Dominic Breazeale.

Again, whether Joshua and Wilder ever face each other hinges on the outcome of Saturday’s Joshua-Ruiz 2 rematch. Joshua’s future will be bleak if he gets knocked out again by Ruiz, because his confidence will be shattered. Every heavyweight that Joshua faces from this point on, will be looking to follow the blueprint Ruiz created to beat him.

“I think Ruiz comes out victorious once again,” said Molina in giving his prediction on the Joshua vs. Ruiz rematch. “I think some things in AJ’s camp are going to get tweaked, but ultimately, it’ll be the same result as the first fight will eventually happen, but just a little bit later in the fight,” said Molina.

Joshua’s trainers are going to keep him on a short leash this Saturday, and make sure he doesn’t get caught up in any of the furious exchanges like last time he fought Ruiz. AJ will try and fight smart, use his jab, and make it technically a boring fight.

Joshua looked like he emulated former heavyweight world champion Wladimir Klitschko’s fighting style in his win over Joseph Parker in 2017, and it worked well. However, Wladimirs fighting style didn’t always work for him. He liked to clinch, jab and move a lot, but he still had problems with pressure fighters.

Molina believes his power will give Hrgovic issues

“Eventually, he’s got to fight someone that is going to make him hurt in the ring, and basically I think that’s me. I think I’m going to come in, and put him in some situations that he’s going to have to think about. ‘Damn, that’s what a heavyweight punch feels like. I feel like I’m strong enough, I’ve trained hard enough, and I’m ready to put him in that spot he’s never been in with,” said Molina.

2016 Olympic bronze medalist Hrgovic is very similar to former heavyweight champion Vitali Klitschko in how he fights, and he’s very slow and robotic like him. We don’t know if Hrgovic possesses Klitschko’s steel chin or not, because his opposition has been poor since he turned professional.

It’s a bad sign that Hrgovic was unable to knockout journeyman Kevin Johnson in their eight round fight in 2018. Johnson is a fighter that Joshua stopped in 2 rounds in 2015, and Martin Bakole knocked out in 5 rounds last October. Hrgovic is slow, and he doesn’t put his punches together like Joshua.

Hrgovic has NEVER fought a dangerous puncher like me – Molina

“I do bring a lot of experience, and I don’t care what opponent you’ve seen him fight, he’s never fought a dangerous puncher like me. So we’re going to find out a lot of things on Saturday, but mainly we’re going to find out if I can still pull the trigger. My training has gone well. We see a lot of flaws in Hrgovic, we put in a good game plan, and now it’s time to execute on Saturday.

“We’ve studied his tape. He’s a very, very big and strong guy, but in the heavyweight division, they all are. There’s nobody at the top that you can say, ‘Hey, he’s not strong. They’re all strong, they’re all big, and this is nothing new to me. It’s time for me to use my experience, and go in there and exploit his weaknesses. To me, a win or a loss doesn’t change nothing,” said Molina.

Hrgovic is going to have problems when he faces punchers that can reach his chin, and his lack of hand speed will further hurt him. Molina’s only chance of beating Hrgovic is if he lets his hands go, and attacks him early on. The knock on Molina is he tends to freeze up when facing good opposition, and he fails to get his shots off.

Molina not worried about losing

“Win or lose, I wake up, and go to work on Monday. My life has never changed. I love what I do, and boxing is my passion,” said Molina.

We saw that in Molina’s 3rd round knockout loss to Joshua in 2016. Molina looked terrified throughout the fight, and that made it easy for Joshua to knock him out quickly. Even in Molina’s bout against 40-year-old Tomasz Adamek in 2016, he fought scared through the first nine rounds. Finally, when Molina did start throwing meaningful punches in the 10th, he knocked Adamek out. Molina is a much different fighter when he’s fighting aggressively compared to when he’s holding back with his shots.