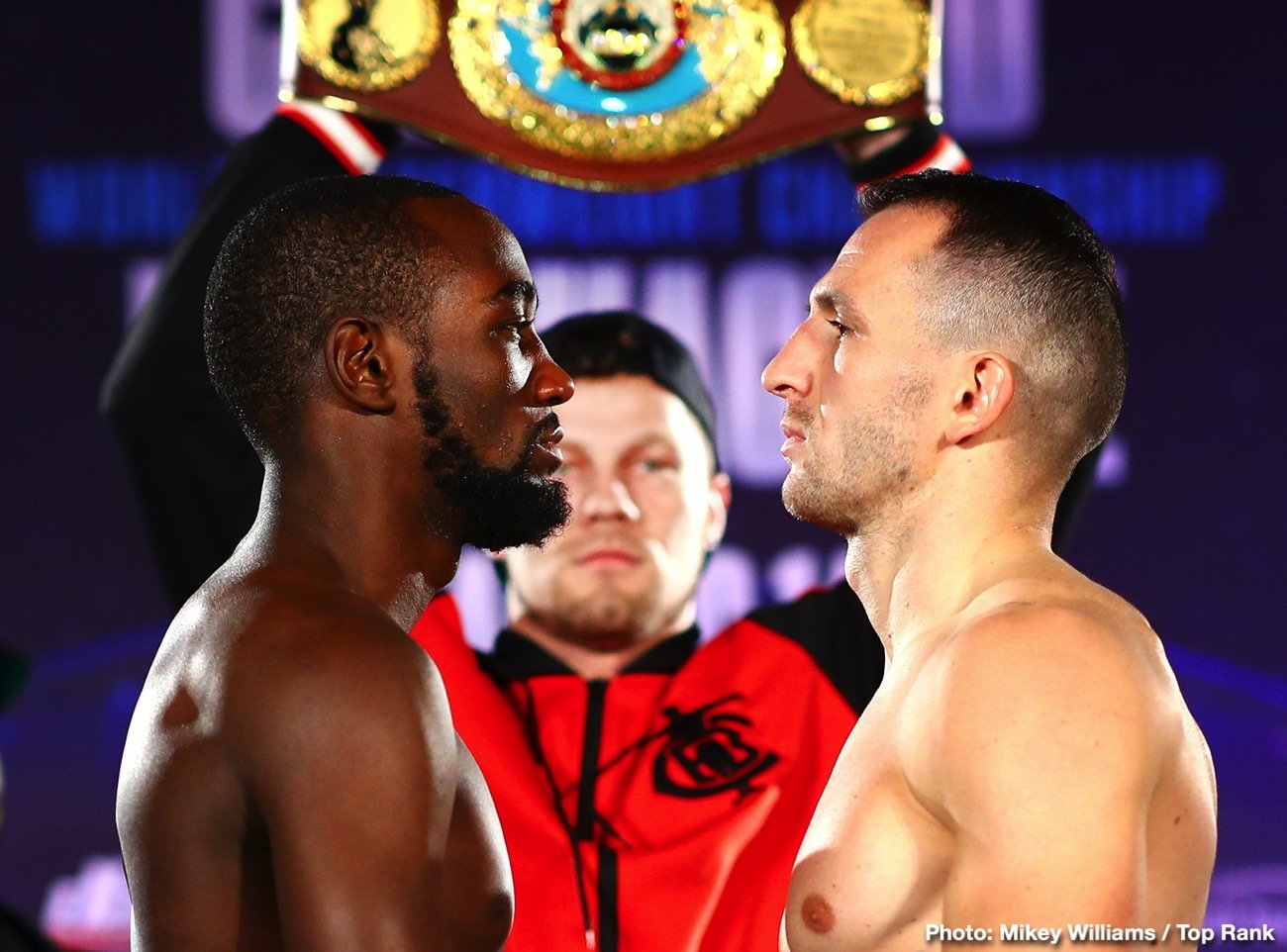 By Sean Jones:  Terence Crawford’s fight tonight against Egidijus Kavaliauskas (21-0-1, 17 KOs) is a minor roadblock in the path of his ultimate goal of unifying the welterweight division to become the undisputed champion. Crawford wants to retire he turns 36, but he can’t do that unless he unifies the 147-lb weight class.

It’s not looking good for the 32-year-old Crawford (35-0, 26 KOs) that he’ll be able to unify the welterweight division. IBF/WBC welterweight champion Errol Spence is injured from a car crash, and he was the only PPC fighter interested in facing Crawford. WBA champion Manny Pacquiao has other ideas for his coming fights, and Crawford isn’t being mentioned as part of his plans.

Crawford still wants to accomplish a lot before retiring

“I feel great but I feel like I’ve still got a lot to accomplish,” said Crawford to ESPN. “I want to become undisputed at 147. That’s the kind of thing that drives me – to become undisputed. At 135, I couldn’t become undisputed, like the politics that are going on right now. But all in all, I’m blessed with how my career has gone so far. I’ve accomplished a lot in the sport of boxing.

“I don’t trust a lot of people,” said Crawford. “They try to switch the narrative around to make it something that it’s not, and make it sound like, ‘You said this when you didn’t say that.’ I don’t like the instigating. It’s good for boxing, but if I say something, I want it to come from me. It’s good for promotion and all that. And I feel like certain media outlets what to get certain things from me when they need it.

“I feel like I’ve been doing that,” said Crawford when told that he DOES need to promote his fights. “I feel like things have been twisted around, and they haven’t been put in the right position at the right time,” Crawford continued.

It was easier for Crawford for him to unify the 140-lb division, because there were no one popular in that weight class at the time. This was before the talented guys like Josh Taylor, Jose Ramirez, Regis Prograis and Ivan Baranchyk had emerged.

The three years that Crawford fought at 140, between 2015 and 2017, was the ideal time for him to unify the division. If he had fought during this era, he might have lost to Ramirez, Prograis, Taylor or Baranchyk. Crawford relinquished his titles without fighting any of those young lions.

“As far as my last fight, everything wasn’t set in right as far as the tickets, and the promotion on the fight itself,” said Crawford in sounding upset about his fight with Amir Khan not being a huge one.  “I just felt like it could have been bigger if everything was ran right, but it was their first pay-per-view. At the end of the day, they work for you, when you think about it.

Terence says he doesn’t like the way his ESPN pay-per-view fight against Amir Khan was promoted last April, because he thought it could have been bigger.  Crawford’s promoters at Top Rank were in a tough situation to begin with though, as Khan isn’t a big name in the U.S with the casual boxing fans.

The hardcore fans knew that Khan’s career has never been the same since his consecutive losses to Lamont Peterson and Danny Garcia eight years ago. Khan was knocked out cold by Canelo Alvarez in six rounds in 2016, and he’d beaten low level opponents Phil Lo Greco and Samuel Vargas. Khan was shockingly dropped by Vargas in the 2nd round of their fight last September. Crawford vs. Khan was never going to do well being sold on ESPN PPV. It was the wrong opponent, and the wrong time for Crawford.

“I’m not frustrated,” said Crawford when told that Errol Spence supposedly said that he’ll fight him after he faces some other guys first. “I’m frustrated at the circle around it where they can’t say my name. It’s like someone coaching him, ‘Don’t mention him, and don’t recognize him as a champion.’ That’s when I get frustrated, and that feeds me more to go in there and knock him off. That’s why I want the fight so bad, because I want to prove the doubters [wrong].

“I’m the type of person where I’m about that acting,” said Crawford when asked why he isn’t more vocal in calling out Errol Spence Jr. “I’m not about that talking. I know what I’m capable of doing. So when I say I’m going to f— you up, I really mean it. And if you don’t think I’m telling the truth, then show me. No,” said Crawford when asked if he thinks he’ll ever get a fight with Spence. “Hey, it happens.”

If a unification fight between Crawford and Errol Spence is to take place, it probably won’t be until 2022. Crawford’s promoter Bob Arum revealed this week that an inside source told him that Spence won’t be returning to the ring soon.

Terence plans on retiring after he becomes undisputed 147-lb champion

“When you look at the media, they say, ‘Oh, he can’t sell,’ but when you look at my numbers compared to them, it’s like, ‘Dang, he’s doing better than them, but we can market him more because he’s a different color, and he’s the nice guy,” said Crawford.  “You don’t got to be a clown, because they’re laughing at you. Yeah, you’re making money, but you’re a clown. Don’t be a clown.

“For sure,” said Crawford when asked if he’s made enough money from boxing to retire on. “I don’t live this hard life. I’m buying things that’ll grow money, like houses, buildings, property. In Omaha, I’m buying them. People are always going to need a place to stay. I don’t know,” said Crawford when asked how much longer he has left in his career. ‘I used to have a set number of 33, 34.

“I’m going to quit when I’m 33 or 34. If I can get the meaningful fights that I really want, then that’s when I’m going to quit. I just want to be undisputed. I can be done right now, and I believe in my heart that I’m still going in the Hall of Fame just off of what I’ve accomplished right now,” said Crawford.

It would be best for Crawford not to get his hopes up about him unifying the 147-lb division, because it’s not likely to happen.

Tyson Fury: The real fight is me and Wilder; No one’s interested in Joshua-Ruiz »