Lopez (15-0, 12 KOs) picked up the IBF 135-lb title last weekend in knocking down and stopping champion Commey (29-3, 26 KOs) in round 2 at Madison Square Garden in New York. This was supposed to be a big test for the 22-year-old Lopez, but it turned out to be a simple one that he easily passed. The way that Teofimo took care of the 32-year-old Commey left no doubt that he’s a real THREAT to Lomachenko.

Teofimo’s promoter Bob Arum of Top Rank Boxing says he’ll be setting up a fight between him and WBA/WBC Franchise/WBO lightweight champion Lomachenko (14-1, 10 KOs) next April at Madison Square Garden in New York. That’s a fight that both guys want, and he sees no problems putting it together.

“I had it 50-50,” said Chris Algieri to Fighthype in talking about the Commey vs. Lopez fight. “I said, anyway this fight ends in a knockout early by Teofimo or from Commey, I wouldn’t be surprised. It’s two guys, both sharpshooters, both killer punchers. I thought Teofimo answered a lot of questions. I do,” said Algieri when asked if Lopez is ready for Lomachenko.

“Honestly, after the performance he had tonight, he could beat Lomachenko. That would be a tremendous fete. But you have to remember, Lomachenko is best at 130. Teofimo is at 135,” said Algieri.

None of them have the punching power that Teofimo possesses, and this enabled Lomachenko to beat them with his combination punching. Loma more or less stood in front of those three fighters, and beat them with his volume punching.  Nevertheless, those were all very hard fights for Lomachenko, and looked beat up at the end of each. It’s going to be interesting to see how Lomachenko stands up to Teofimo’s power for 12 rounds.

“It’s all about the belts,” said Lopez to IFL TV when asked about him looking forward to fight Lomachenko. “I hope it does.” 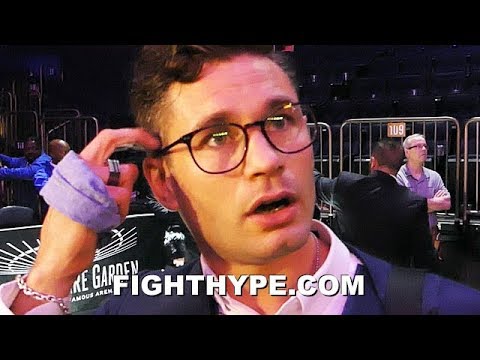 Arum: Lomachenko will be in with this beast [Lopez]

“Loma is going to be in with this beast, who came out of nowhere,” said Arum about Teofimo to Fighthype. “He’s performed except in one fight where he wasn’t so great. To do that against Commey. You’ve seen Commey with Pedraza and Beltran. He’s [Commey] a real seasoned lightweight. I’m not saying he’s the incarnation of Roberto Duran, but he’s still a terrific lightweight.

“It was a 50-50 fight. The one thing they knew is Commey throws punches roundhouse, and Lopez throws them in a straight line,” said Arum. “A straight line is the shortest distance to the chin, and they were both throwing punches when Lopez caught him,” said Arum.

Top Rank boss Arum thought the Commey-Lopez fight was going to be a 50-50 affair, but he turned out to be horribly wrong. If Arum believes that Lomachenko has a chance of losing to Teofimo, he might be having misgivings about making this fight.

Arum has been trying with no luck to turn the two-time Olympic gold medalist Lomachenko into a star for the last six years, but it hasn’t happened. Lomachenko’s lack of punching power, and the lack of high profile opponents has hurt him.

Like Terence Crawford, Lomachenko hasn’t been put in with anyone popular enough to increase his star power. One can argue that Teofimo after just 3 years as a professional, is already surpassing Lomachenko in popularity, and that’s because of a variety of things. Lopez has these things going for him that Lomachenko doesn’t:

Arum targeting April for Lomachenko vs. Teofimo fight at MSG

“He’s kind of a star that crept up on us,” said Arum to Fighthub about Teofimo. “When he first started, and kept knocking guys out, and looking sensational, people would say, ‘who’s he fighting?’ He was fighting nobody. But now that he gets in with a guy like Commey, who destroyed Pedraza and Beltran.

“He’s a real legitimate lightweight champion [Commey], and he takes him out like that. You’d better believe Teofimo’s star is shining,” said Arum. “We’re looking for April. That’s what I hope,” said Arum when asked if he’s interested in bringing the Lomachenko vs. Teofimo fight to Madison Square Garden. “I think both guys want to do it here.

“There’s an argument that he doesn’t have the experience, but you talk to him. He’ll walk through Loma as easy as he did Commey,” said Arum of Teofimo. “That’s the confidence he has. The kid [Teofimo] was in great shape. He really was, and he was ready to take a punch like lights out from Commey, but his punch landed quicker,” said Arum about Lopez.

Putting the Lomachenko vs. Teofimo fight in New York in April will give the 22-year-old Lopez a big advantage, but Loma will be up for it. The Ukrainian was willing to fight British lightweight Luke Campbell in London, England last August, and he wasn’t affected by the pro-Campbell boxing fans. It’s going to be tougher though for Lomachenko against Lopez, because the Brooklyn, New York native has one-punch power. He’s going to be motivated by the crowd, and looking to punch holes through Lomachenko.

Ward on Lopez: ‘The power and star power is real’

“I thought Teofimo was going to get tested tonight, but I also thought Commey could get caught,” said Andre Ward to Fighthype. “You don’t know how it’s going to go. It’s boxing. The power is real, the star power is real, and he’s fulfilled one of his father’s prophecies by becoming champion in 15 fights. Now he has to work on fulfilling the other one, which is beating Vasiliy Lomachenko,” said Ward.

Commey (29-3, 26 KOs) had the kind of punching power that would have made things difficult for Lopez, but he didn’t get a chance to use it. Teofimo’s superior power was too much for Commey, and he was unable to stay there long enough to land.

The Commey-Lopez fight was similar to watching the 1993 contest between Gerald McClellan and Julian Jackson. Both fighters were knockout artists, but McClellan got to Jackson first with his power shots and stopped him in round 5.

Lopez is now a world champion at 22, and he must beat Lomachenko for the ‘Takeover’. It’s going to be harder obviously for Teofimo to beat Lomachenko, because he won’t stand in front of him. Although Lomachenko wasn’t afraid to brawl with Campbell and Linares, it’ll be a different story against Teofimo.

Loma can’t fight like that against him without getting beaten up, and taken out. Linares already exposed Lomachenko as being susceptible to lightweight power, and Teofimo is unquestionably a far bigger puncher than him.

.@VasylLomachenko officially welcomes @TeofimoLopez “to my club” 😂 and has very specific plans for 2020:

🥊 Unification fight with Lopez in April
🥊 A showdown with @Gervontaa pic.twitter.com/3nJkm24qkN

Lomachenko is in a “REAL fight” against Lopez says Bradley

“He [Lopez] will have to close the distance. Lomachenko likes that kind of fight, but Lopez will have the opportunity to hit Lomachenko, because he has short arms,” said Tim  Bradley to Fighthype. “He likes to be on the inside. This is a real fight, and this isn’t going to be easy for Loma by any means. It’s going to be a good little scrap, and I can’t wait for it,” said Bradley.

Walters looked like he rehydrated into the 140s for the Lomachenko fight, but he didn’t have the boxing skills to compete. Walters had similar power to Teofimo, but he couldn’t do anything against Loma.

The fight was not even competitive. However, that was three years ago in 2016 when Lomachenko was in his late 20s, and he’s aged since then. The fight also took place at super featherweight, and Lomachenko is now fighting at lightweight. Things are MUCH different now.

Walters was 30 when he fought Lomachenko, and he hadn’t faced any real adversity during his career aside from his match against Jason Sosa. Lopez’s recent hard fight against Masayoshi Nakatani showed him how tough things can be when you’ve got a talented opponent with a strong will.

DiBella: Teofimo will be DANGEROUS for Lomachenko

“The second that punch landed, I was like, ‘Okay, goodnight,'” said DiBella in talking about the right hand shot that Teofimo knocked Commey down with in round 2. “Do I think he’s going to get better? Yes, I think he’s going to get better. But when you have that kind of offensive arsenal, you’re going to be dangerous against anybody, even Loma. I love the kid, and I loved the kid before the fight even happened. He’s a nice. I always thought he was talented.

“He’s got freak of nature punching power, and he’s got tremendous athletic ability, particularly on the offensive side of his game,” said DiBella in talking about Teofimo. “If I was Loma, I’d probably do the fight now, because the kid is only going to get better in a year or two. It’s not like it’s going to be an easier task later on. Loma is probably more experienced still, but Teofimo is dangerous against anybody,” said DiBella. 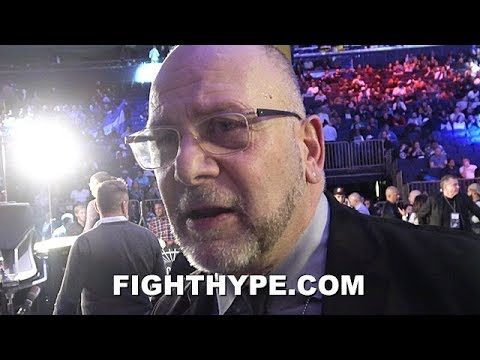 The one-punch power that Teofimo has going for him means that Lomachenko will need to be perfect for 12 rounds to keep from getting clipped. Can Lomachenko avoid getting hit by Lopez for 12 rounds? Probably not. Consequently, Lomachenko will have to take a lot of heavy shots for him to beat Lopez, because he doesn’t have the power to stop him.