Jermall Charlo on Chris Eubank Jr: “He wants to talk himself into a fight” 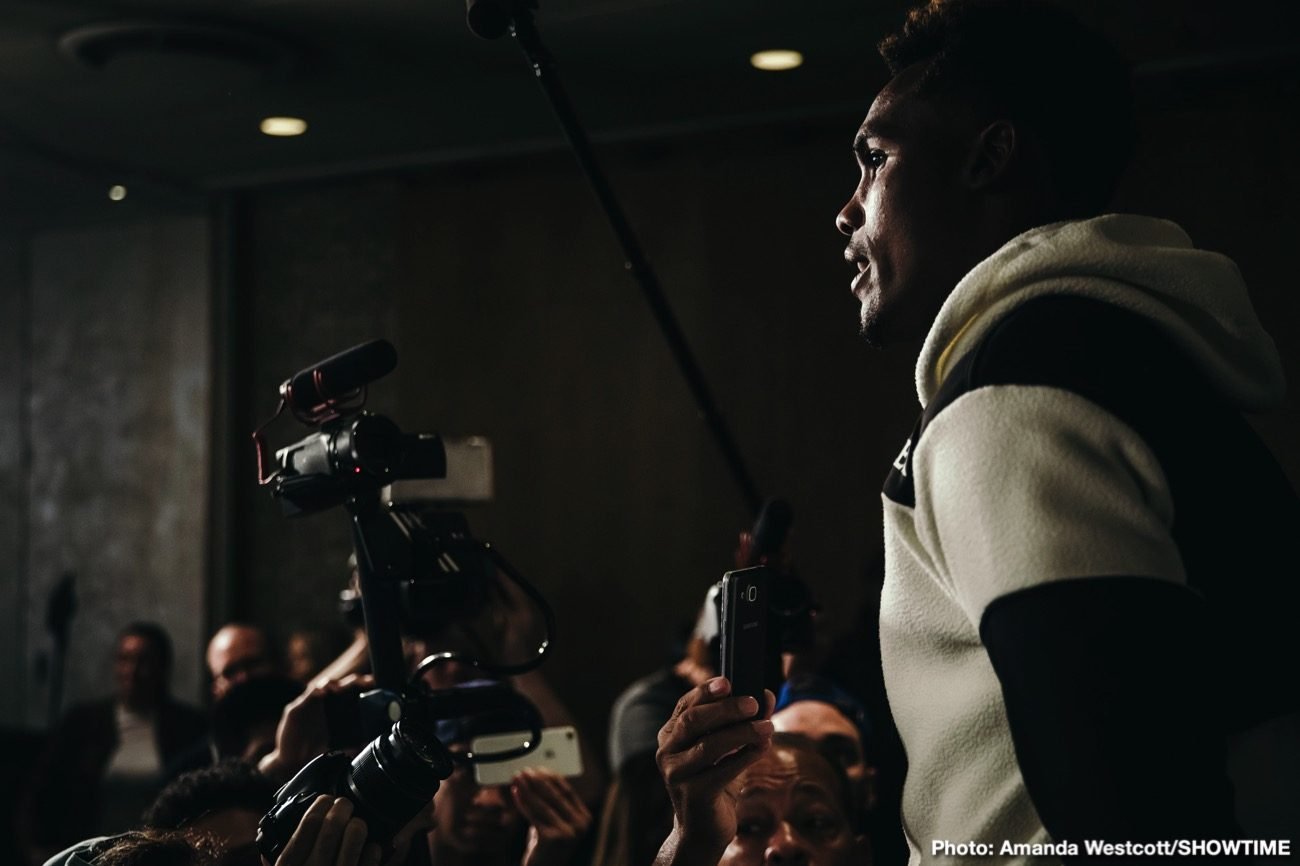 By Charles Brun: WBC middleweight champion Jermall Charlo says former IBO 168-lb champion Chris Eubank Jr. is trying to talk his way into a fight with him because he’s RUNNING OUT of TIME. Eubank Jr. (28-2, 21 KOs) wants to challenge the unbeaten Charlo (29-0, 21 KOs) for his WBC belt.

The two middleweights are sharing the same card this Saturday night on December 7 at the Barclays Center in Brooklyn, New York. Charlo, 29, is defending his WBC 160-lb title for the second time against #5 WBC Dennis Hogan (28-2-1, 7 KOs) in the main event, whereas Eubank Jr. fights 2008 Olympian Matt Korobov (28-2-1, 14 KOs) in a 12 round fight in the co-feature.

The interim WBA middleweight title will be up for grabs in the Eubank Jr. vs. Korobov fight.

Charlo says Eubank Jr. isn’t going to be able to bump and grab him. He’s going to have to fight him when the time comes, and then he’ll find out what it’s like to mess with him.

“Yes. I see him talking and saying everything that he was saying,” said Charlo about Eubank Jr. “It doesn’t matter. He wanted to talk himself into a fight with me or someone bigger because he is running out of time. Like he ran out of gas, he is going to run out of time  and before you know it, I’m going to be right there in his face,” said Charlo.

Eubank Jr. is moving down in weight from 168 to go after world titles at middleweight. He’s been fighting in a division that he lacked the size for since he turned professional in 2011, and it’s only now he’s moving to 160.

It’s still early for Charlo to be talking about getting in the face of Eubank Jr., because there are no guarantees that he’s going to get passed Korobov. That’s going to be a hard fight for Eubank Jr., and he could lose. Korobov was arguably robbed in his fight against Charlo last December in losing a controversial 12 round decision in Brooklyn.

A lot of boxing fans saw Korobov as deserving the decision in that fight. In Korobov’s last fight, he was held to a questionable 10 round draw against Immanuwel Aleem last May. Despite Korobov dominating Aleem through most of the fight, he had to settle for a draw.

Charlo expects Eubank Jr. to say nothing when he confronts him

“When I get in his face they don’t ever say any of that,” said Charlo. “They all talk over the Internet and they say these things but they know what’s really up. It’s Jermall Charlo. I’m not one of those fighters who’s going to do the bumping and grabbing and stuff like that. We are going to fight. So let him talk. I’m not from the U.K. I’m from Houston, Texas.

They can say whatever they want to say but when it’s time to fight, I want to see them talk that same game. Everybody that’s been saying this and that about Jermall Charlo, they have got to live up to it,” said Charlo.

It’ll be interesting to see if Charlo and Eubank Jr. both win their fights this Saturday. Hogan is no easy out. He gave WBO junior middleweight champion Jaime Munguia all he could handle last April in losing a HIGHLY controversial decision to him in Monterrey, Mexico.