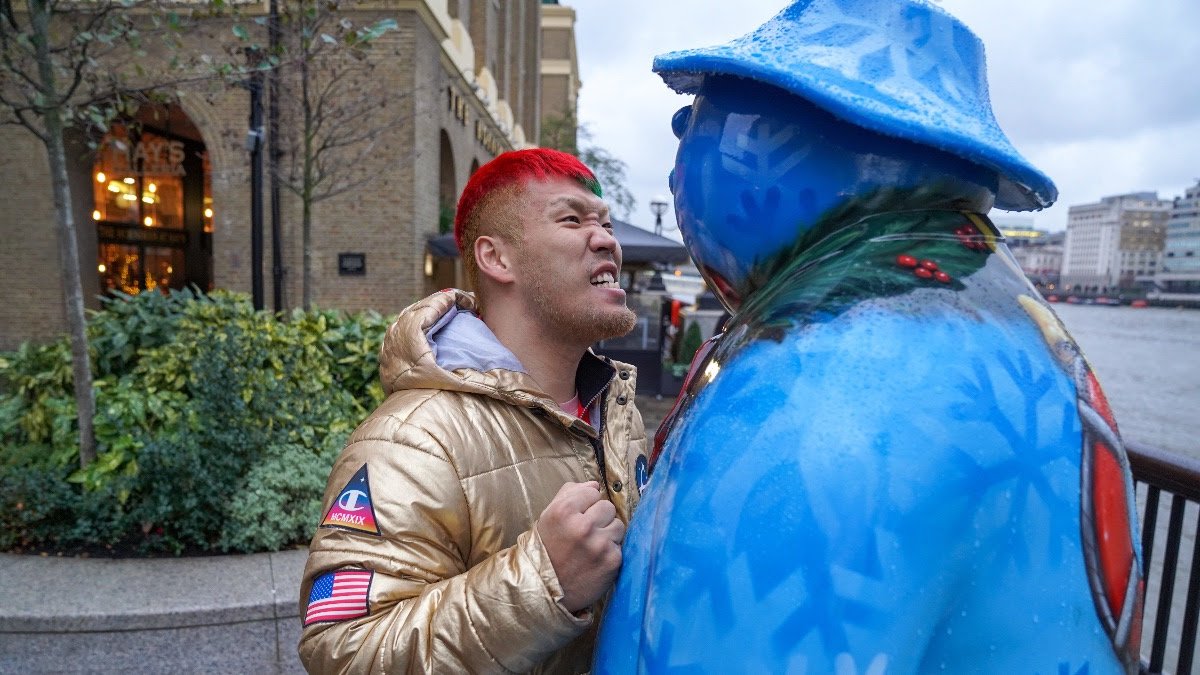 JUST FOUR DAYS AWAY from his titanic tussle with Daniel Dubois, Japanese Heavyweight Kyotaro Fujimoto today battled the British weather as he enjoyed ‘Christmas by the River’ market at London Bridge City.

Unphased by the prospect of festive fisticuffs with power-puncher Daniel, confident Kyotaro spent the day sampling food from the bustling Christmas market, posing for photos beneath the iconic Tower Bridge and bizarrely facing-off with a sculpture of The Snowman.

In London’s most picturesque seasonal market, Kyotaro indulged in a grilled chicken and rice dish, followed swiftly by an enormous hot dog with mustard.

The hungry Heavyweight then issued a warning to his younger adversary.

“Daniel Dubois, I’m going to knock you out!”, he thundered.

Daniel ‘Dynamite’ Dubois, famed for the explosive power which inspired his moniker, is the bookies favourite for the scrap on Saturday.

Boasting an impressive 13-0 record with 12 knockouts at just 22-years-old, Dubois is considered by many a future World Champion.

And having recently despatched of Ghanaian Ebenezer Tetteh to claim the Commonwealth gold in September, ‘Dynamite’ is riding a run of form which would terrify most men.

Kyotaro Fujimoto is not most men, however, and once he bought himself a novelty Union Jack hat from one of the stalls under the cover of Hays Galleria he promised to nab the victory “for Japan.”

“I love Japan. I am very proud of being Japanese and I will win for them.”

A man who clearly wears his heart on his sleeve, or even his head, Fujimoto recently unveiled a shocking new haircut that features the Japanese flag – the Hinomaru – shaven into the back.

Posing for photos with passers-by, who were enthralled by his towering stature and eccentric look, Kyotaro admitted he liked to “stand out”.

“I like colourful clothes, colourful hair… my outfit today was made especially for this match-up.”

He even revealed that as a young child he took up combat sports because of this desire to stand out from the crowd.

A former K1 World Champion in the sport of kickboxing, Kyotaro might look to some like a joker but when it comes to fighting he is anything but and he believes he and his team are well prepared for Dubois and will return to their native Japan victorious

“Daniel is a good fighter, he is big and strong” he conceded, “but I am very experienced and I love to fight. I am ready to perform over twelve hard rounds.”

He was coy when pressed on the fight he’d like next should he best Dubois, but did suggest that he would be happy to have a crack at any of the big names in the division.

“Joshua, Wilder, Fury. These are the best fighters in the world and to fight any world champion would be amazing.”

Before he can realise those dreams however, it’s Daniel Dubois at the Copper Box Arena on Saturday night with the WBC Silver and WBO International Titles on the line.

Fujimoto’s #13 ranking with the WBA is also up for grabs and, with promoter Frank Warren keen to get Daniel ranked by all of the governing bodies, you’d expect the Japanese bruiser to be feeling under significant pressure.

It didn’t show today though, as It was all smiles at the magnificent ‘Christmas by the River’ for Fujimoto and his team.

« Mikey Garcia next opponent to be announced Wednesday