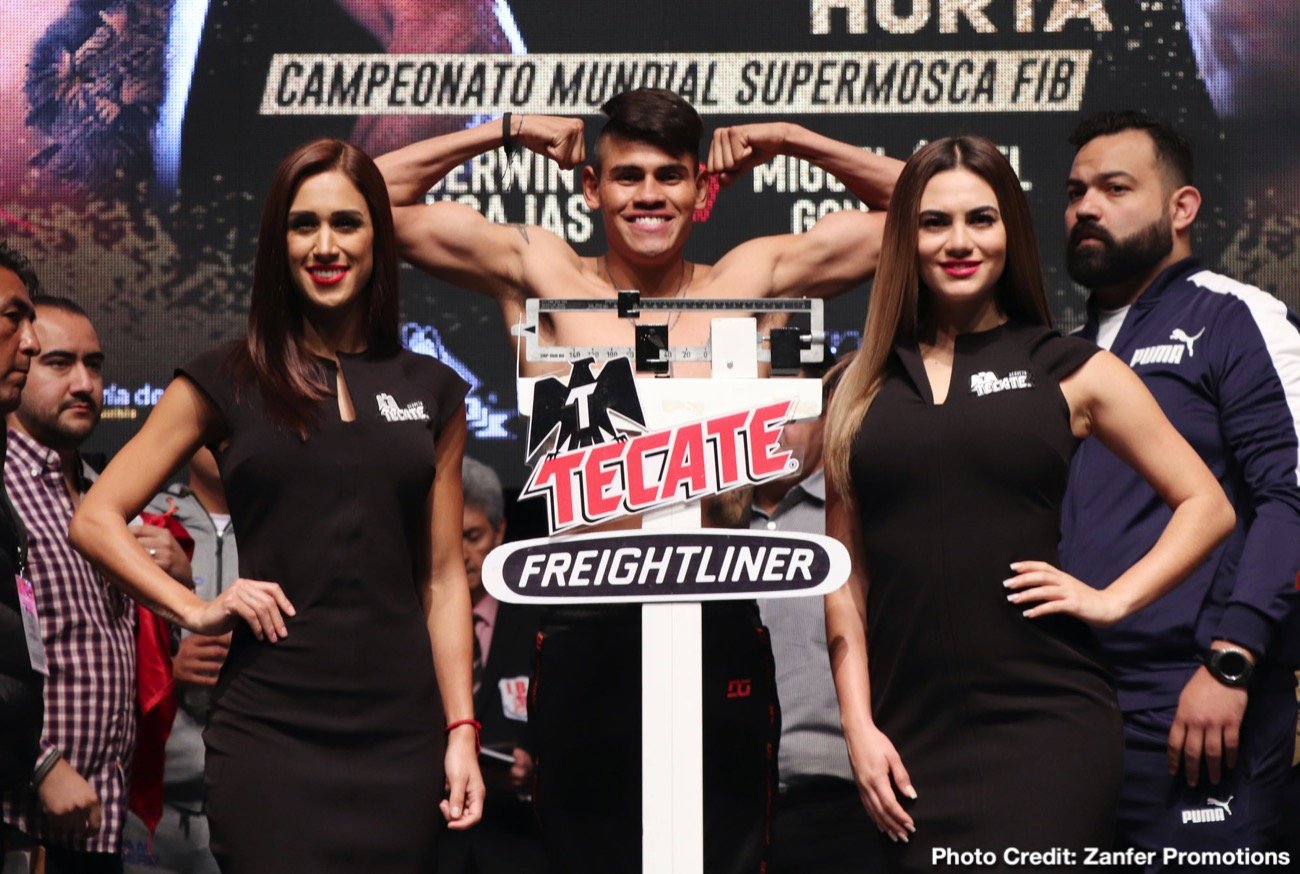 By Aragon Garcia: Emanuel Navarrete will be making a defense of his WBO 122-lb title tonight against Francisco Horta on ESPN at the Auditorio GNP Seguros in Puebla, Mexico. Navarrete-Horta can be seen on ESPN+ at 9 pm ET tonight. Horta isn’t expected to last long tonight under the intense fire power from Navarrete.

The young KO artist Navarrete is a diamond in the rough, and he just needs the names to complete him as a fighter to take his career to the next level.

This is a quick turnaround for the Mexican knockout artist Navarrete (29-1, 25 KOs), considering that he defended his WBO title successfully 3 months ago against Juan Miguel Elorde in stopping him in the 4th round.

Navarrete wants to stay active as possible, and he’s done that quite well in defending his WBO super bantamweight title three times in 2019. Tonight, it’ll Navarrete 24, will be making an unheard of fourth title defense this year, and that’s an incredible fete. Not even former middleweight champion Gennadiy Golovkin defended his titles 4 times in a year.

If successful tonight, Navarrete’s co-promoter Bob Arum of Top Rank Boxing wants to bring him back quickly in February or March 2020, according to Dan Rafael. Ideally, Arum wants to set Navarrete up for a unification match against IBF/WBA super bantamweight champion Daniel Roman or WBC champ Rey Vargas. Arum would need to work with DAZN and Matchroom promoter Eddie Hearn to make the unification fight between Roman and Navarrete.

Navarrete says if neither of those unification fights present themselves, then he’s interested in facing one of the bantamweight champions. He isn’t naming anyone specifically, but it’s clear that Navarrete wants to face Naoya ‘Monster’ Inoue (19-0, 16 KOs), who is coming off a big win over Nonito Donaire.

Arum isn’t saying about wanting to make the Navarrete vs. Inoue fight happen so soon, and it’s understandable why. Top Rank recently signed a deal with Inoue, and they want to build him into a star as fast as possible.

Unfortunately, if Arum matches Inoue against Navarrete this early, he could get chewed up and overpowered the way that Isaac Dogboe was in two fights against the Mexican talent. The 5’7″ Navarrete’s punching power and size makes up for what he lacks in boxing skills.

“In 2020, I would love to unify titles at 122 pounds, and if any of the bantamweight champions would like to move up to 122, I am here,” Navarrete said to ESPN.com. “I want to fight the best. That’s the Mexican way.”

In a perfect system, the big fights would get made for Navarrete, and he would be able to become a big superstar in rapid fashion. The way things are in boxing, the promoters don’t want to take risks with their champions, especially if they doubt they can win. Top Rank and Navarrete might come up empty in trying to get a unification fight against one of the 122-lb champions in 2020.

As for Inoue, he’s definitely not going to want to step up to 122 to face a devastating puncher like Navarrete. Inoue is still licking his wounds from his last fight against former four division world champion Donaire on November 7. The powerful Inoue suffered a cracked right orbital bone, and a broken nose in that fight.

Inoue would be taking a risk facing Navarrete

It would be asking a lot of the Japanese star to return to the ring in February or March to face Navarrete. It would show a lot of courage on Inoue’s part to take a fight against Navarrete under ANY circumstances, but the fast turn around for him makes it unlikely that he would agree to the fight. Like I said, Arum wants to build Inoue into a star, and Navarrete could wreck those plans by finishing the job Donaire started.

Donaire didn’t have the youth to stop Inoue after he had him hurt in the 8th. Navarrete would have that going for him, as well as his power and size. Inoue’s string of good luck would likely run out against Navarrete

“At 122 pounds there are some really good fighters who are champions in the other organizations and we would look to make some of those fights,” Arum said.

Michael Hunter: ‘I will KO Alexander Povetkin after he fades’ »