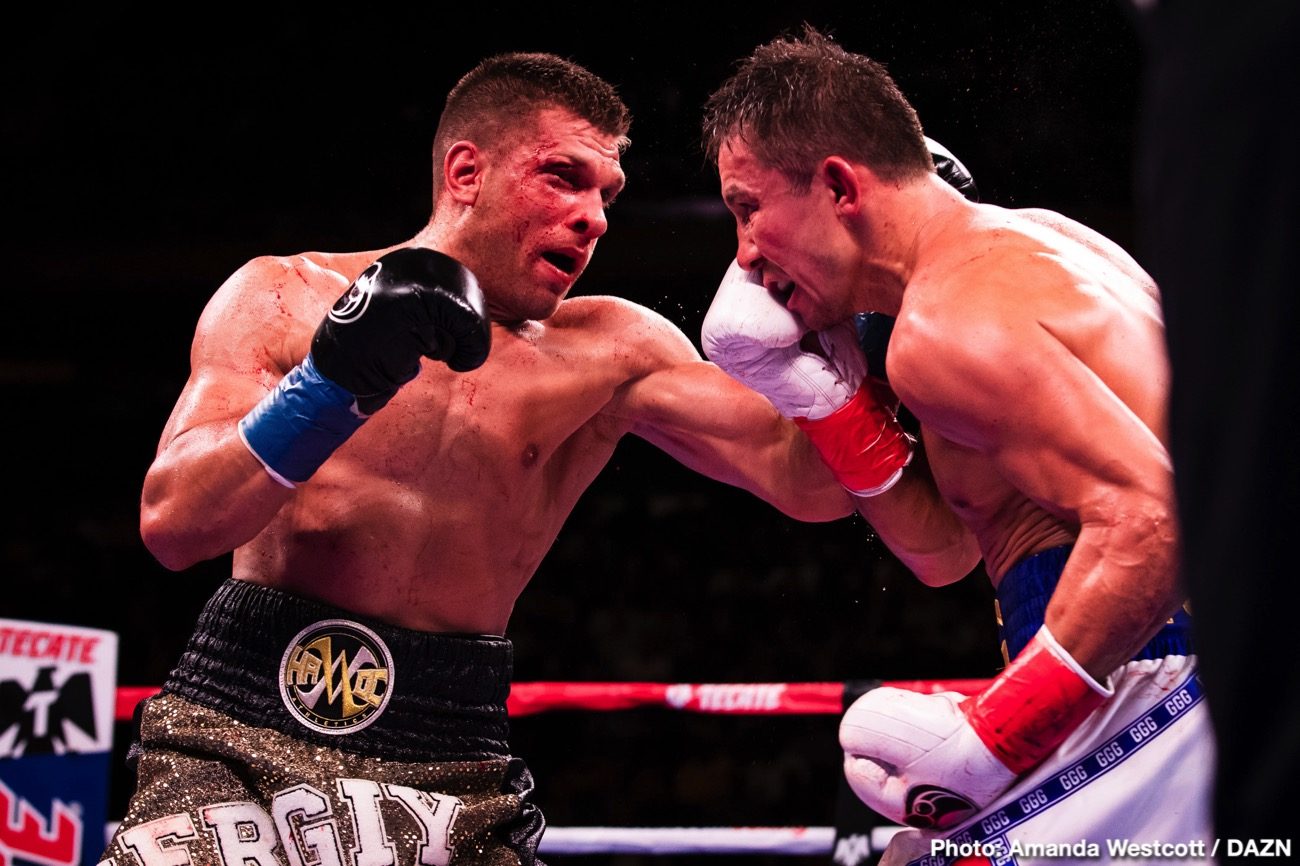 Derevyanchenko, #2 WBC, #7 IBF, #9 WBO, came out on the short end of the stick in losing to GGG by a narrow 12 round unanimous decision on October 5. The two fought for the vacant IBF middleweight at Madison Square Garden in New York, and many boxing fans felt that Derevyanchenko won the fight.

Derevyanchenko would like a rematch with Golovkin, but the Kazakhstan fighter is moving on to defend his IBF title. Golovkin’s promoter Tom Loeffler said recently that he’ll be defending against his IBF mandatory Kamil Szeremeta next.

The crowd at ringside booed Golovkin, and showed that he’s not popular fighter that he once was. Even Canelo spoke out in the media about the decision, saying that Derevyanchenko should have won the fight.

Derevyanchenko has a better chance in facing WBC middleweight champion Jermall Charlo than he does in getting a rematch with Golovkin. Getting a fight against Charlo may require that Derevyanchenko, 33, work his way to mandatory challenger status before he’s given a title shot, because the champion appears to be milking his WBC title.

Since being elevated to WBC middleweight champion on June 22 by the World Boxing Council, Charlo (30-0, 22 KOs) has twice defended it successfully. In his two defenses, Charlo has defeated Brandon Adams and Dennis Hogan. Those were considered ultra soft fights for Charlo.

Derevyanchenko no longer upset at losing to Golovkin

“I’ve had time to calm down. It doesn’t bother me, I’ve moved on,” said Derevyanchenko to Fighthype about his controversial loss to Golovkin. “The most important thing is a great fight, and I got into boxing to show my talent, which I did. It’s hard to say because every fight is it’s own separate fight,” said Derevyanchenko when asked if Canelo will stop GGG if they face each other again.

“I’m definitely watching them, because they’re in my division, and Charlo and Eubank are tough fighters,” said Derevyanchenko upon being asked about his views on Jermall Charlo and Chris Eubank Jr.

Derevyanchenko was in the same situation against GGG as the Kazakhstan fighter was in his 2 fights against Canelo Alvarez. The judges went with the more popular fighter in both of those contests.

It’s better for Derevyanchenko not to be bitter about not getting his hand raised against Golovkin, because it’s a waste of emotion. The positive that came out of the fight was the boxing public saw how talented Derevyanchenko is, and they viewed him as the true winner of the fight.

#2 WBC Derevyanchenko needs to go after the WBC champion Charlo, because that’s a fight that he can get a lot sooner than a rematch with Golovkin or a bout with Canelo. Derevyanchenko’s ranking with the WBC is high enough for him to pick up the mandatory status soon, as long as the WBC orders a title eliminator.

Derevyanchenko: I’ve got unfinished business at 160

“I’m going to continue to train the same way, but I might have to hit harder,” said Derevyanchenko. “I haven’t thought about it, I haven’t studied those fighters, but if there’s a good offer, I can get at 168,” said Derevyanchenko after being asked if he’d be willing to move up in weight to face Callum Smith.

Golovkin was everything I thought he would be – Derevyanchenko

Golovkin’s punching power is what saved him from a loss to Derevyanchenko, as he was able to do some damage in the second half of their fight last October. Derevyanchenko’s face was badly swollen, and both eyes blackened. He was also cut. When Golovkin sat down on his shots, he was doing a lot of damage to Derevyanchenko.

Against Canelo, Golovkin was missing with a lot of his punches, and he needed lessen the power on his shots in order land.  Golovkin found it a lot easier to connect with his punches against Derevyanchenko, and that’s how he was able to beat him.

“I think he [Canelo Alvarez] will still fight at 160. There’s enough good talent at 160 to lure him back to 160,” said Derevyanchenko when asked if Canelo will come back down to middleweight. “I think I’ve proven to the world that I’m a top boxer, and I’ve proven that I’m at the top of the division.

“At this point, my team and their team have to come together and make a deal, and then we can fight,” said Derevyanchenko when asked about him fighting Canelo or Golovkin. “I’m very interested in getting back in the ring and showing what I can do,” said Derevyanchenko.

Canelo will probably come back down to 160, because he’s not going to stay at 175, and risk his neck fighting champions Artur Beterbiev and Dmitry Bivol. Those guys are too dangerous for Canelo. Although Canelo is talking about moving back down to 168 to take on champions Billy Joe Saunders or Callum Smith, he’ll find out that the U.S boxing fans aren’t thrilled with those fights. The contests that the American public wants to see Canelo involved in are at 160 against GGG, Charlo, Derevyanchenko and Andrade.

“The real champ, one of the best fighters walking the planet, and he should be middleweight champion of the world,” said Derevyanchenko’s trainer Andre Rozier to Fighthype. “They seem to always want to give him the short end of the stick, but this is the ‘Technician.’ Remember, I told you that.

“He’s the one, the only, soon to be middleweight champion of the world. We know it from the hearts he is. They’re going to know it by the strap. This is my dude right here,” said Rozier about Derevyanchenko.