Crawford: ‘Kavaliauskas is NOT a bum’ 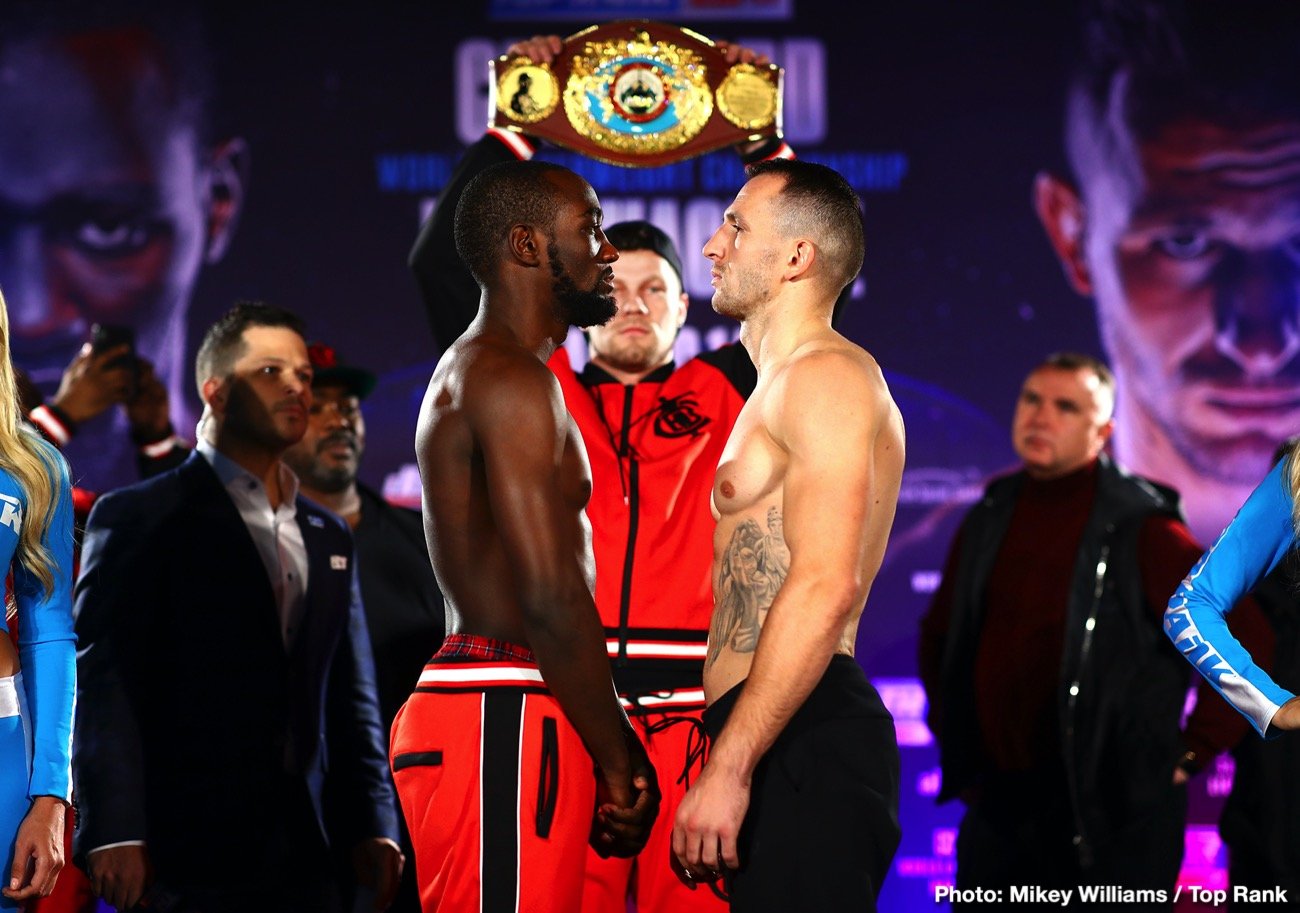 By Barry Holbrook: Terence Crawford is single-handedly trying to build the credibility of his opponent Egidijus Kavaliauskas by telling the media how accomplished he is, and how he’s a solid professional. Boxing fans haven’t shown much interest in WBO welterweight champion Crawford’s fight on Saturday night against mandatory Kavaliauskas (21-0-1, 17 KOs), as they see the fight as mismatch.

Crawford-Kavaliauskas are fighting tonight at Madison Square Garden in New York. The fight will be streamed on ESPN+. The co-feature bout is between IBF lightweight champion Richard Commey and mandatory Teofimo Lopez.

The problem that Crawford has is his promoters at Top Rank have been putting him in against over-matched opposition since they signed him, and some fans are getting tired of the noncompetitive bouts. They want to see Crawford take on the likes of Shawn Porter, Danny Garcia, Manny Pacquiao, Errol Spence Jr. and Keith Thurman. Those fights are probably not going to happen soon if ever. Crawford says he doesn’t think he’ll ever get a fight against Spence.

Kavaliauskas coming off of a draw against Ray Robinson

The two-time Olympian Kavaliauskas has 21 wins and no defeats on his six-year professional resume, but those were against less than stellar opposition. His management stepped the 31-year-old Kavaliauskas up recently against bottom fringe contender Ray Robinson, and not surprisingly he was held to a 10 round draw. Kavaliauskas was exposed in that fight, and should have lost in this writer’s opinion. That was Kavaliauskas’s last fight going into tonight’s match with Crawford.

Crawford: You can’t be a bum as a 2-time Olympian

“I’m ready to go out there and show I’m the best fighter in the world right now,” said Crawford to First Take with Stephen A at ESPN. “This is a guy that has never been hurt before in his career or as an amateur, and he’s a two-time Olympian,” said Crawford about Egidijus Kavaliauskas.

“So I’m looking to go out there and do something no one has ever done to him.

“It still motivates me because I’ve still got a job to do on Saturday, but I don’t listen to people that say those types of things because they don’t know a thing about boxing or about the opponent that I’m facing,” said Crawford to Max on Boxing. “He’s not very known in the United States. I know he’s a two-time Olympian, and you can’t be a bum as a two-time Olympian,” said Crawford in talking about Kavaliauskas.

The only thing the people can judge Crawford’s opponent Kavaliauskas on is his level of opposition since he turned professional in 2013, and he’s not fought anyone good yet. He failed when his promoters put him in with a lower fringe contender Ray Robinson. Kavaliauskas got exposed by him. If that fight had happened earlier in his career, then the boxing public wouldn’t be so disappointed in him as Crawford’s opponent.

Unfortunately, that was Kavaliauskas’s last fight. So he’s coming into tonight’s match with Crawford off the back of a draw against Robinson, who he should have been able to beat if he had talent.

Kavaliauskas is strong and durable – Crawford

“And I know that’s amateurs. I didn’t make it to the Olympics, and he has experience and he’s strong. He’s very strong, and durable and he can fight a little bit. I had the pleasure to see him fight in person a few times, so I’ve been up close in person to be able to see him fight live,” said Crawford.

As Crawford points out, Kavaliauskas is a two-time Olympian, but what he isn’t saying is he’s from the small country of Lithuania. You can argue making the Olympic team in a tiny country like that is a lot easier than trying to make the team from a place like the U.S, Russia or Cuba. Kavaliauskas lost in his first matches in the 2008 and 2012 Olympics, and was immediately eliminated from the competition.

Crawford wants to prove to the boxing world that he’s the #1 welterweight, but he’s not going to do that by fighting guys like Kavaliauskas.

Crawford read to box or slug with Kavaliauskas tonight

“I thought he was a strong fighter, he does some good things in the ring, and he’s smart,” said Crawford in talking about Kavaliauskas.  “He uses feints, and he’s not the fastest guy, but he can punch. That’s something you’ve got to look out for. I’ll feel him out, and if I feel I need to box him, I’ll box him. If I feel I need to stand toe-to-toe, I’ll do that too.

“I’ve been calling for those fights for years. I’ve been calling out Pacquiao since 2015,” said Crawford in revealing his inability to get the top fighters to face him. “That fight didn’t happen, so there’s nothing I can really do to get those fighters in the ring with me. Whoever everybody wants me to fight. I’ll take them all. I don’t hand pick them. I just fight them,” said Crawford.

Choosing to box Kavaliauskas is a waste of time for Crawford, since the fight is already seen as a mismatch. If Crawford chooses to get on his bike, and run from Kavaliauskas the entire fight, his stock will drop. Boxing fans want to see sluggers at 147, not clever boxers, who try not to get hit for 12 rounds.

Crawford might be confused thinking that Floyd Mayweather Jr. got away with boxing his opposition for his entire career, and he has a huge fan base. It’s different with Mayweather, because he has blazing hand speed, and he was willing to stand in the pocket. Crawford isn’t incredibly fast, and he doesn’t stay in the pocket. He likes to move.

What’s kind of sad is Kavaliauskas is arguably a step down for Crawford from his last 3 fights at 147 against Amir Khan, Jose Benavidez Jr. and Jeff Horn. Those fighters would all likely beat Kavaliauskas.

“There are fighters out there, but once we fight and they don’t live up to the expectations that they put them on, then it’s like, ‘Ah man, that fight wasn’t what I thought it would be,” said Crawford about not receiving credit for his wins.

“At 147, I haven’t proven myself to the point where, ‘Alright, he’s number one guy in the division.’ But as of my whole career, me moving up two weight classes, and becoming world champion at 147 in my first fight at 147, I know I’ve proven more in my career than any of those fighters have.

“None of those fighters have moved up in weight and won multiple championships, two-time lineal champion, undisputed champion, fighter of the year. I can go on and on,” said Crawford in comparing himself to the PBC welterweights. “That’s what I mean when I say I’ve proven more.”

Crawford has accomplished more in his career than the Premier Boxing Champion welterweights Spence, Danny Garcia, Shawn Porter and Keith Thurman. Terence has won world titles in 3 weight divisions, BUT he’s done it against lesser champions. So while it may seem to Crawford that he’s done more in his career than the PBC fighters, he’s actually done less, because the fans weren’t impressed with the guys that he fought to win his world titles.

These are the guys that Crawford has beaten to win his world titles:

Crawford doubts Mayweather will fight him in 2020

Nah,” said Crawford when asked if Floyd Mayweather Jr. will fight him in 2020 when he makes his comeback. “I’d take Pacquiao, because I’ve always wanted to fight him, and I feel like he ran. When you think about it, he fought Algieri, Ruslan Provodnikov, Tim Bradley, and that’s it. He fought somebody else when he had the opportunity to fight me. He didn’t want to fight me,” said Crawford.

Manny Pacquiao never fought Provodnikov. Crawford probably meant Lucas Matthysse when he mentioned Provodnikov as one of Pacquiao’s opponents. It frustrates Crawford that Pacquiao, 40, hasn’t ever fought him, but at the same time, he’s got to understand why he’s not getting the fight.

Pacquiao is old, and it wouldn’t be fair to him to take on a much younger fighter. Crawford admits that he WON’T be fighting when he’s 36. But if he was 36, and showing signs of fading, it’s doubtful that he would want to fight someone  talented that was eight years younger than him.

Floyd Mayweather Jr. is obviously not going to fight Crawford when he comes out of retirement in 2020. Crawford understands that he’s not going to be the one that Mayweather hand-picks. For Mayweather, he’ll likely fight another MMA guy or some faded boxer, who is on his last legs.

Boxing » Terence Crawford » Crawford: ‘Kavaliauskas is NOT a bum’