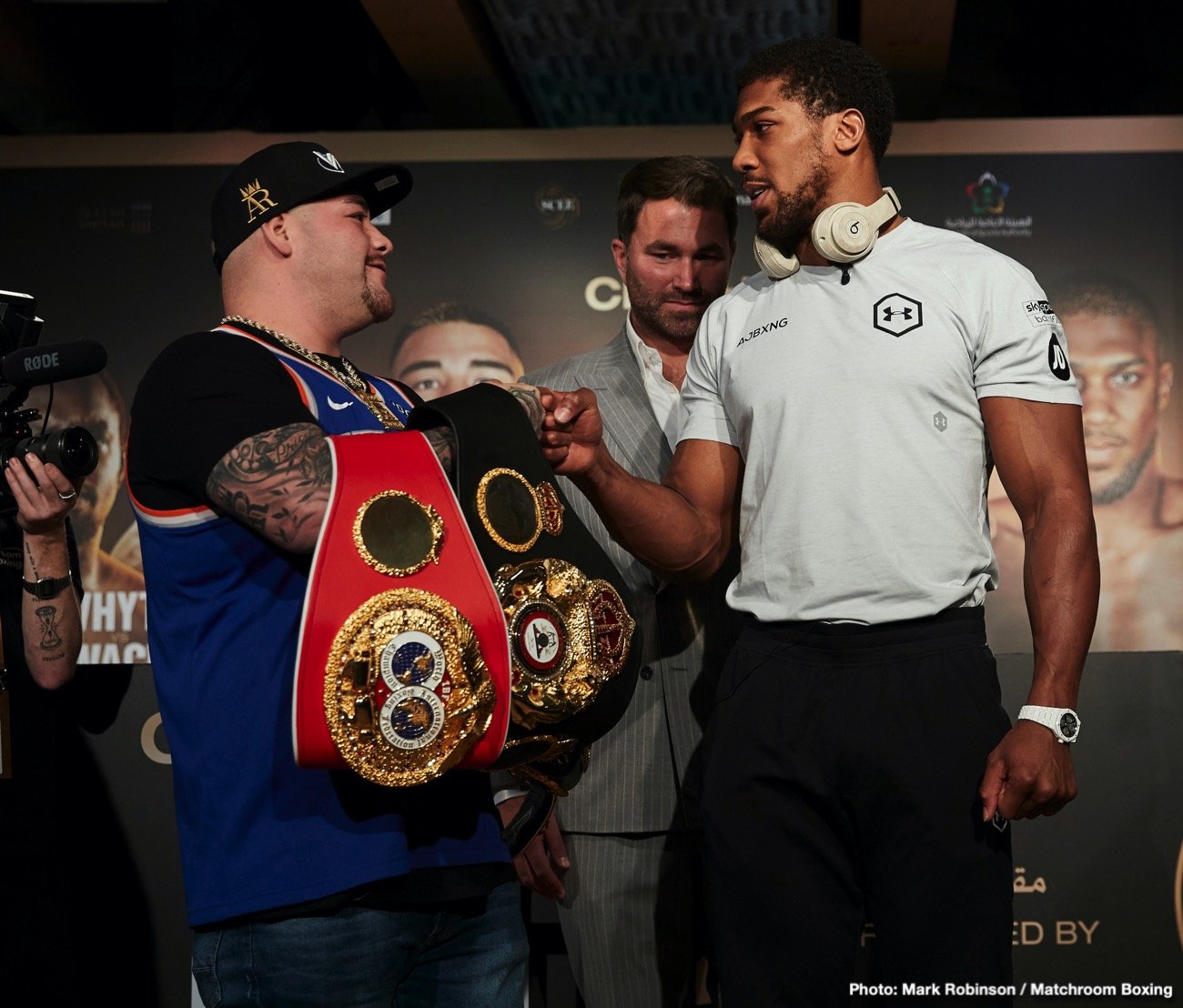 By Tim Royner: Anthony Joshua is already talking about wanting a TRILOGY fight against Andy Ruiz Jr. at some point in the future despite the fact that he has no idea what the outcome will be for their rematch on Saturday. Joshua (22-1, 21 KOs) says this will definitely not be the last time the two heavyweights face each other, and he’s predicting a knockout outcome.

It’s risky for Joshua to face Ruiz a third time regardless of what happens on Saturday. If Joshua gets knocked out by Ruiz on Saturday, it’s obvious that he’ll never face him again. Matchroom won’t let that happen.

AJ’s promoter Eddie Hearn has been talking about a potential trilogy match between him and Ruiz Jr. (33-1, 22 KOs) for months now, so it’s not surprising that he’s joining him.

There’s too much green stuff for Joshua – and Matchroom Boxing – to make for there not to be a third and even fourth fight with Andy.  Hearn has literally been chomping at the bit in talking about a third fight between AJ and Ruiz.

If Joshua wins the rematch, Hearn says these are his plans:

If Joshua wins those fights, he’ll almost surely swing back for a trilogy bout against Ruiz Jr. in 2021. Don’t be surprised if Joshua vacates the WBO strap in order to avoid fighting the crafty Usyk, who moves a lot and is difficult to fight.

“Me and Andy Ruiz, if he’s dedicated to the game, we’ll definitely see each other a third time down the line. This ain’t gonna be the last time I see Ruiz in the ring,” said Joshua to Sky Sports. “We make for good fights, I think there’s definitely going to be a knockout.”

A win for Joshua on Saturday will even it out at 1-1 with Ruiz Jr., and a rubber match will be needed so that boxing fans can identify who the better fighter is between the two. Of course, if Ruiz Jr. knocks Joshua out on Saturday, then it’ll be crazy for him to dare facing the American ever again.

A robbery will make it necessary for a third fight

With the potential of controversy in this Saturday’s Joshua-Ruiz 2 rematch in Saudi Arabia, a third fight is a given. If Ruiz gets robbed on Saturday, a third fight will be a forgone conclusion.

You hate to say it, but there’s MASSIVE potential for Ruiz to get worked over when it comes to officiating in this fight. Hearn already made it clear on Monday that basically the entire 15,000 fans that will be showing up will be rooting for Joshua. Ruiz is out there in Saudi with just him and his team, and a few fans here and there to support him.

Hearn STRESSED out over Joshua rematch with Ruiz

“I just want him to win so much, but for him, I can’t tell you how much he wants to win this fight, and how hard he’s worked to try and win this fight,” said Eddie Hearn to IFL TV in talking about Joshua.

“I don’t feel any pressure of, ‘It would be great for Matchroom to represent the world heavyweight champion again.’ But honestly, I just want him to win so badly, because I know what it means to him as an individual.

A lot rides on the rematch between Joshua and Ruiz. If Joshua loses this fight, it’ll likely change the way that Hearn matches him. The Matchroom promoter would need to match Joshua against weaker opposition from that point on, because if he continues to put him with good opposition, he could quickly see his career evaporate. Once a fighter loses a couple fights in a row, they tend to go downhill from there. Moreover, fighters will know how to beat Joshua after Saturday’s bout, and they’ll make sure they follow Ruiz’s game plan every time.

Joshua’s plans if he wins rematch

It’s safe to say that a unification fight against WBC heavyweight champion Deontay Wilder won’t be in store for 2020 for Joshua. What we’ll likely see is Joshua vacate the WBO title, and then face his IBF mandatory Kubrat Pulev. That’s an easy fight for Joshua, considering that the 38-year-old Pulev is slow, weak and badly flawed.

“The Facebook live fight will be Mahammadrasul Majidov against Tom Little, and then you’ll go into the broadcast, ” said Hearn in discussing the order of fights for this Saturday in Saudi.

There’s one good undercard fight on Saturday’s card between heavyweights Michael Hunter and Alexander Povetkin. The rest of the undercard is woefully bad, and that’s being kind. It’s hard to believe that Hearn has put together so many mismatches for such an important card. He’s added a lot of talented heavyweights, but unfortunately, they’re in with guys that are completely overmatched on paper. Hearn could have tweaked the undercard and had these match-ups:

These fights make a heck of a lot more sense than the mismatches that Hearn has put together for the card.