Andy Ruiz’s dad: ‘He had the worst camp you can have’ for Joshua fight

By Dan Ambrose: Andy Ruiz Sr. says his son Andy Jr. had the worst possible training camp you could have for his rematch with Anthony Joshua last Saturday, and he wasn’t listening to what he and his trainer Manny Robles were telling him.

Six months after shocking the world by stopping Joshua in the 7th round last June, Ruiz’s reign as the IB/WBA/WBO heavyweight champion ended with a whimper. It was the worst performances of Ruiz’s career by far, and it came against the wrong opponent. Andy needed this win to set himself up for bigger money fights down the road against Deontay Wilder and Tyson Fury, but he can forget about that now.

Andy didn’t put in the effort in training camp

Ruiz Sr. says Andy didn’t want to get a physical trainer to help him take the weight off for the fight, and he was staying at a friends house, and partying. The result of Ruiz Jr. (33-2, 22 KOs) failing to train properly was him losing to Joshua (23-1, 21 KOs) by an embarrassingly one-sided 12 round unanimous decision in Saudi Arabia.

Andy Sr. believes that Ruiz will learn his lesson from this fight, and train hard for his next match. He wants Ruiz Jr. to get down to 255 lbs for his next fight, and stay at that weight. That’s a weight that Ruiz can perform well, but definitely not the 283 lbs that he weighed for the Joshua fight last Saturday.

Ruiz was throwing 4-5 punch combinations in the first fight, but in the rematch last Saturday, it was all Andy could do to throw one punch at a time.

Ruiz wasn’t listening because of the fame – Andy Sr.

“You have to lose the weight. He lost the weight about a month ago.’ He came overweight, that was the problem. It was too much weight for his body. He weighed 282. Plus after he eats, he was almost 290-something. There was no way he was going to do something good, so now he’s learned his lesson.

“All the fights that he’s done in his career, he was 255, 257, 246. The last time he fought, he was at 268, and he felt comfortable. I told him, ‘You have to lose weight,’ but at that time, we didn’t have enough time to lose weight. That’s why he fought at that weight. He was not listening because of the fame. He was with a Rolls Royce, he was with his friends, he was throwing parties, and not listening to the camp,” said Ruiz Sr. about Andy.

It’s surprising that a guy as polite and as experience as Ruiz Jr. would fail to dedicate himself for the rematch with Joshua. After all the hard work that Ruiz had put in during his career, how he could slack off after tasting success at the top for the first time in his career? If anything, Ruiz should have buckled down even harder after his victory over Joshua, and focused on the task at hand. This wasn’t a good time for Ruiz to live it up, and act as if he’s got it made.

Andy Ruiz was training by himself

“He was running by himself. We were in a house in Manhattan Beach, that we he could come with us, and stay in the house,” said Ruiz Sr.. “He didn’t want to stay with us. He wanted to stay with his friend, and try to run by himself. It was the worst camp that he could be doing.

“I don’t think nothing about AJ. He’s a good boxer, and a great person. We love AJ, and he did the things to win. But Andy, he didn’t do the right things. He spent the money on a nice house, and he bought another house. What I do is buy land and build houses. Now he’s going to spend the money with me. He’s going to invest money. That way we can buy land, build houses and commercial property. 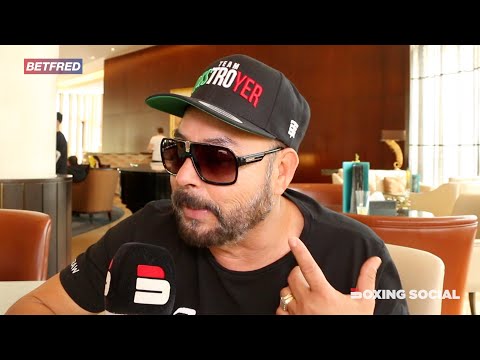 “We got a good promotional company. He’s going to come back. We got Wilder right there. If Anthony Joshua doesn’t want to give another opportunity, we got other plans to go. It’ll be good,” said Ruiz Sr.  “Once he trains the proper way, it’s going to be tremendous.

Ruiz’s trainer Manny Robles never let on about the problems he was having with him during camp. Although Robles initially complained about Ruiz not starting training camp when he wanted him to, he didn’t give any other info.

Ruiz was too tired to throw punches against Joshua

“You seen the other fight, he threw 10 punches, 11 punches,” said Ruiz Sr. “Now he was just throwing the jab to the body, the right hand. He didn’t throw any combinations, because he wasn’t right with the arms, and the legs. Yeah, he was frustrated. He said, ‘My arms, I don’t know what’s wrong with me.’ I told him, ‘try not to think about that. Just throw punches, and move, that way you can go 12 rounds.’ I was trying to mentally help him.

“We’re going to talk to the [promotional] company to see what else for us. He’s disappointed, and he said, ‘I should have listened to you, and Manny Robles. I never listened, and I tried to train by myself, and do the thing by myself. It didn’t work, because I didn’t listen. It’s all my fault. Now it’s going to be different, because all his friends are going to kick him out.

There was a big difference in how Ruiz fought in the first fight with Joshua compared to the rematch. It was like two different people.