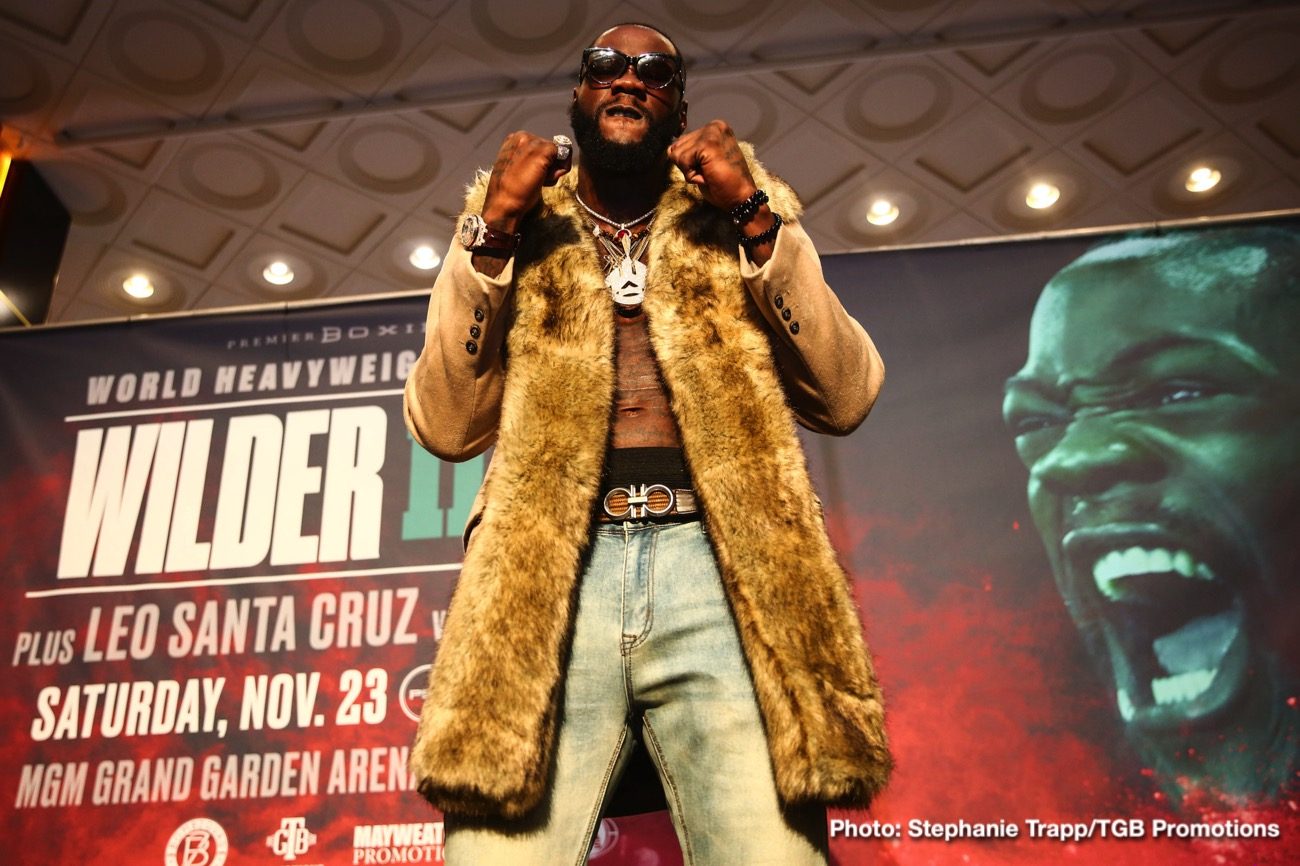 By Scott Gilfoid: Tyson Fury’s trainer Ben Davison will be on a scouting mission this Saturday in attending the WBC heavyweight champion Deontay Wilder’s rematch with Luis ‘King Kong’ Ortz at the MGM Grand in Las Vegas, Nevada.

Taking notes probably won’t help Davison, because Wilder seemed to have Fury’s number in the championship rounds last December. Wilder dropped Fury twice, and arguably was robbed of a knockout victory when the referee gave a count to the unconscious Fury.

“Take as many notes as possible, because you’re going to need it,” said Wilder when told that Tyson Fury’s trainer Ben Davison will be ringside to scout his fight with Ortiz.

“Ortiz,” said Wilder when asked ‘who was the tougher fight, Ortiz or Fury?’ “You have to really think when you fight Ortiz. Why do you think fighters call him ‘old,’ but won’t go in there and beat his ‘old’ a–? They don’t want to fight him, and that makes him more dangerous. I put him on a high pedestal, because of his high intellect in the ring.

Davison will be taking notes for lineal heavyweight champion Fury (29-0-1, 20 KOs) to try and help him when he faces Wilder (41-0-40 KOs) on February 22. If Fury can’t take Wilder’s power, then Davison might as well stay at home and forget about taking notes. The last time Fury fought Wilder, he hit the deck twice, and was lucky the referee gave him a break.

There’s still a lot of question marks whether Fury will even make it to the ring to face Wilder. There are a lot of people who think Fury doesn’t want it anymore. He’s tasted the easy money from his WWE match recently, and he’s getting tons of cash from Top Rank.

When you factor in all the green stuff Fury is getting on top of the fact that Wilder knocked him cold in the 12th round last December, it makes it possible he’ll back out of the fight. Fury has a ready-made excuse if needed with the cut that he suffered against Otto Wallin last September. Fury needed 46 stitches to close up the cut.

“He [Ortiz] had 360-something amateur fights. You see how he moves in the ring. He’s very strategic, and he knows what he’s doing. We live in an era now where examples and models are made for us, where they [fans] feel if you’re undefeated, that’s the best way.

“We all know that a loss doesn’t define who you are. Even in life, when you lose, it’s about getting back up. Most people want to see how you get back up, because in life, we all fail at something. We all fall, and many people that hit rock bottom right now, they want to know how we get up. It’s okay to lose at times. It’s all about how you pick yourself up, dust yourself off and keep going,” said Wilder.

A lot of Fury’s boxing fans are hoping that Wilder loses or some reason. Many of them deeply bitter about how Fury couldn’t beat Wilder last year. They’re upset because they wanted Fury to be given a decision win over Deontay. The problem is when you’re a challenger and you get knocked down TWICE, and basically saved by the referee in being given a count while unconscious, you’re not going to win.

Challengers don’t beat champions when they get knocked down twice by them. Gilfoid is trying to remember the last challenger that beat a champion after being dropped twice, and he can’t recall any times. So if Fury wants to beat Wilder, he’s got to stay on his feet. Fury looked like a human Yo-Yo last year with the way he was up and down on the canvas. It was so awful to look at. He was mostly just spoiling, and eating hard shots. Gilfoid only gave Fury two rounds in the entire fight, and those were rounds that easily could have gone Wilder’s way.

Lomachenko on Canelo: He didn’t choose Beterbiev or Bivol; he picked Kovalev not at his peak »