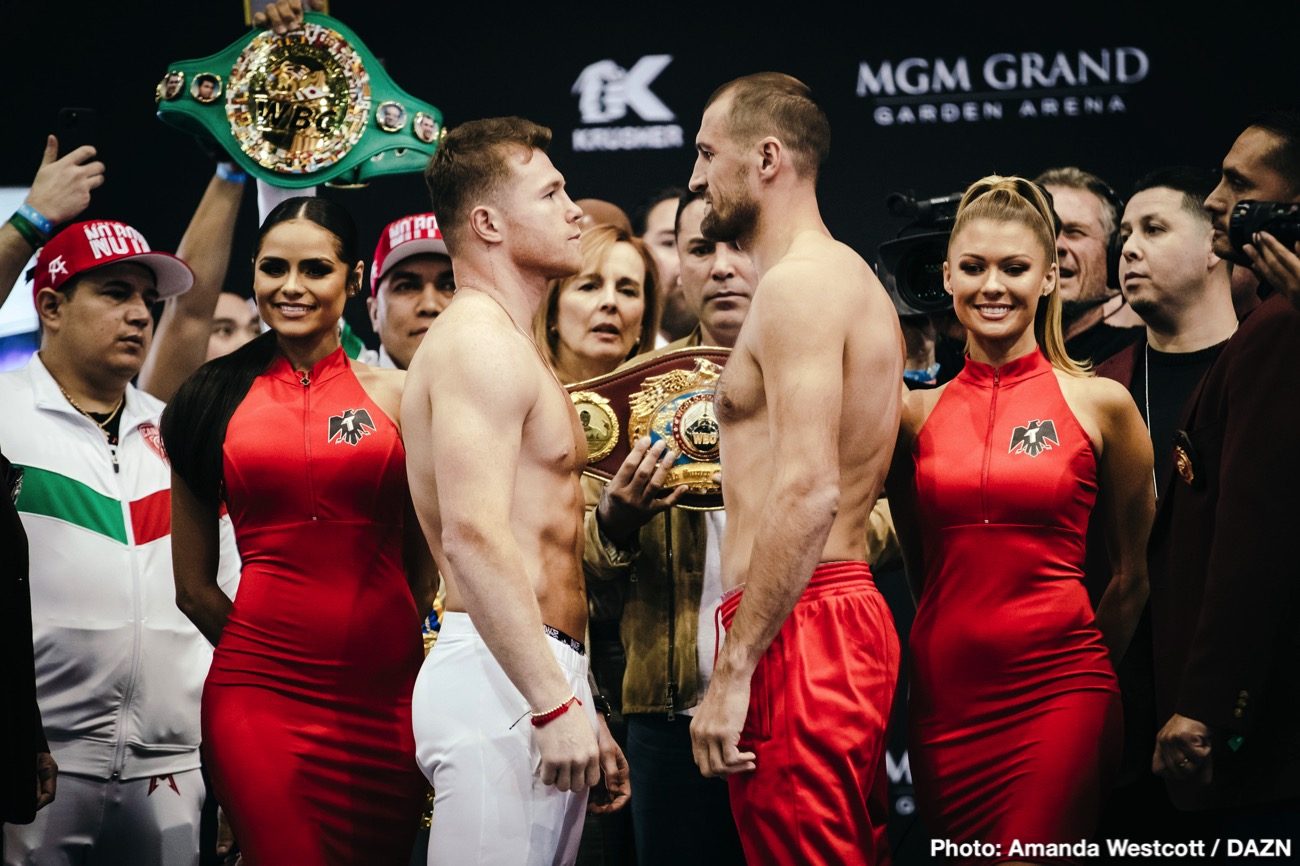 By Sean Jones: Saul Canelo Alvarez is about to find out the hard way that he made the mistake in moving up two weight classes to try and add to his record by challenging WBO light heavyweight champion Sergey Kovalev (34-3-1, 29 KOs) for his title. Kovalev’s trainer Buddy McGirt has already let the cat out of the bag by revealing that part of the game plan for tonight is to hit Canelo on his arms and shoulders to wear him down.

McGirt says Kovalev will hit Canelo on the arms for the first six rounds. By the midpoint of the fight, Canelo’s arms and shoulders will be rubbery, and he won’t be able to punch with power or speed. At that point, Kovalev will start unloading with his power shots to go for the knockout. This is a tactic that some Eastern European fighters use to wear down their opponents, and it’s quite effective. It takes patience though, and discipline to resist going to the head.

It might sound a little strange for Kovalev to be aiming his punches on the shoulder and arms of Canelo, but it makes perfectly good sense when you remember how difficult it is to hit him to the head. Canelo moves his head better than most fighters in boxing, which makes it almost impossible to hit him cleanly with shots. Fans wonder why Gennadiy Golovkin couldn’t hurt Canelo, and the reason for that is he couldn’t hit him with his best shots.

Golovkin had to take the power off his punches in order to land upstairs on Canelo. Once Golovkin did that, he gave Canelo the advantage, because he was able to connect with maximum power at the easy to hit GGG. This gave some boxing fans the perception that Canelo had more power than Golovkin. Obviously, that wasn’t the case. Canelo isn’t a huge puncher at 160, and he likely won’t at 175 either.

We’re not aiming for his head,” said McGirt to Fighthype in giving a hint of the game plan for Saturday. “You name it, he’s getting hit there. We’re going to hit him everywhere but the bottom of his feet. And we’re going to mug his a–. We’re not going to try and hit him to the head. We know he’s elusive. But he can’t move all this,” McGirt said in pointing to the torso of the interviewer. “We’re going to bang that for five or six rounds.”

The odds-makers and the fans both have the herd mentality in jumping on the bandwagon in believing that Canelo will win because Kovalev didn’t look so great in his last fight against Anthony Yarde. A lot of people believe that Kovalev is still same vulnerable fighter that lost to Andre Ward and Eleider Alvarez.

“Canelo is doing what he wants to do. He’s got his own agenda,” said Demetrius Andrade to Behind The Gloves. “He wants to be four-time world champion. There’s nothing wrong with that. Kovalev is an older guy, and he gave us great boxing. Now his time is [up]. It’s like Bernard Hopkins against the Joe Smith guy. Of course, he’s still The Krusher,” said Andrade when asked if Kovalev has NO chance at all against Canelo.

“His last fight was good to see [against Anthony Yarde]. He’s not all the way out, but he can be worn down. You’ve seen him not take shots well. He’s not the most technically sound fighter out there, and he can get hit. And he’s not the guy that fought Andre Ward. Canelo having more youth, more ground to use, and his ability to be more mobile and wear him out. But The Krusher is long, he’s tall, and he’s heavy. He still has pop, because getting hit with any shot hurts in the ring,” said Andrade.

Kovalev is better now than when he fought Andre Ward in 2016 and 2017. Back then, Kovalev wasn’t even trying to box Ward, and he couldn’t adjust to the tactics that he used. Things are different now for Kovalev with him since he changed trainers, and added McGirt to his team. Kovalev is consistently fighting smart now, and he’s not running into the same problems he was before McGirt came on board.

“I think Canelo is going to win, but it’s going to be tough though,” said Adrien Broner to Fighthype in predicting Canelo will win against Kovalev. “When you move up not just one weight classes but two weight classes, the shots are a lot different. The shots are a lot heavier, and it’s a lot of wear and tear on your body. I just feel Canelo has got the skills to edge this one out.

“He’s going to have to box a lot. I think he’s a hell of a fighter. He’s actually grown. When I first signed with Golden Boy, I flew to Carson, California, and he was the main event. He got dropped by a body shot. I told them, ‘I want to fight him next.’ To see his growth, it’s just crazy,” said Broner.

More than anyone, Broner is well aware of the difficulties involved in moving up two weight classes to take on stronger fighters. Broner started his career out at lightweight in 2008, and when he moved up two divisions to welterweight in 2013, he found out how much harder they hit when he lost to Marcos Maidana. Broner never could make adjustments to deal with the power and the size of the 147-lb fighters. He didn’t power in his punches to beat the welterweights, and he was over-matched when facing the talented guys.

Its not expected that Canelo will stay at light heavyweight to take on the talented fighters like Artur Beterbiev and Dmitry Bivol. This is clearly a one and done fight for Canelo at 175, as he’s going to move back down to 160 or 168. If Canelo stayed at light heavyweight to fight Beterbiev, he would be in for a world of hurt, and it wouldn’t look good for him.