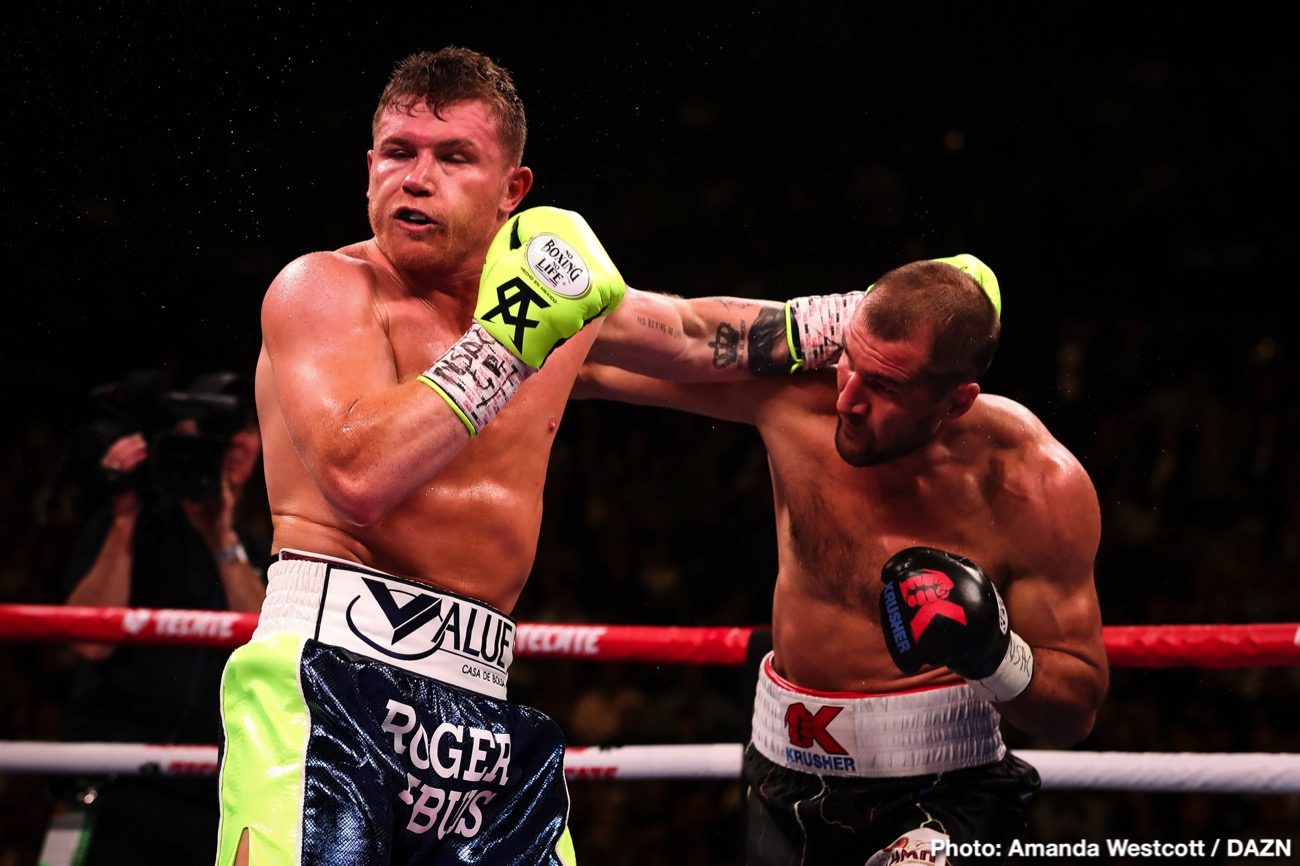 With a devastating knockout in Round 11, pound-for-pound boxing superstar Canelo Alvarez (53-1-2, 36 KOs) defeated Sergey Kovalev (34-4-1, 29 KOs) to become the new WBO Light Heavyweight Titlist. With this victory, Canelo once again makes history by becoming a four-division world champion and only the second Mexican fighter ever to capture the 175 pound title.

Earlier in the evening, Ryan Garcia (19-0, 16 KOs) brought the early fireworks and maintained his perfect record with a spectacular knockout of Romero Duno (21-2, 16 KOs) in Round 1. Seniesa Estrada (18-0, 7 KOs) ultimately won the highly-anticipated clash against Marlen Esparza (7-1, 1 KO) by technical decision after an accidental headbutt in Round 5 led to a nasty gash on Esparza’s forehead that ultimately halted the fight at the end of Round 9. Also, Blair Cobbs (13-0-1, 9 KOs) remained undefeated after a stoppage over Carlos Ortiz (11-5, 11 KOs) at the end of Round 6, in a battle where both men hit the canvas. 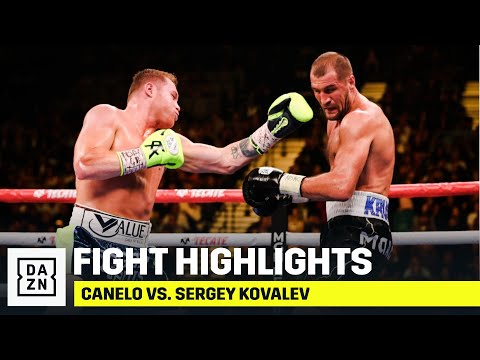 Here’s what the fighters had to say:

“I’m very thankful. This is just a step in my career, in my history, and all I ask of you, is to be patient because Canelo will make history. That’s a guarantee.”

“The plan overall was patience, that was basically it – to have patience. We knew it was going to be five, six rounds and it was going to take some time for me to get him. But honestly he’s a great fighter. I’m new at this weight, new in this division. Much credit to him, he’s a great fighter, but we stuck to our game plan. It was delayed a little bit but overall it was successful.”

“It was a very close fight because he was defensive, he was closing up his guard. All he was doing was try to establish points, but we knew what was coming. Inevitably it would come, and everything came out the way we had planned.”

“We have to see what happens. We have to do what’s best for us. We have to look for the best fights, the big fights, but obviously give the victories to Mexico.” 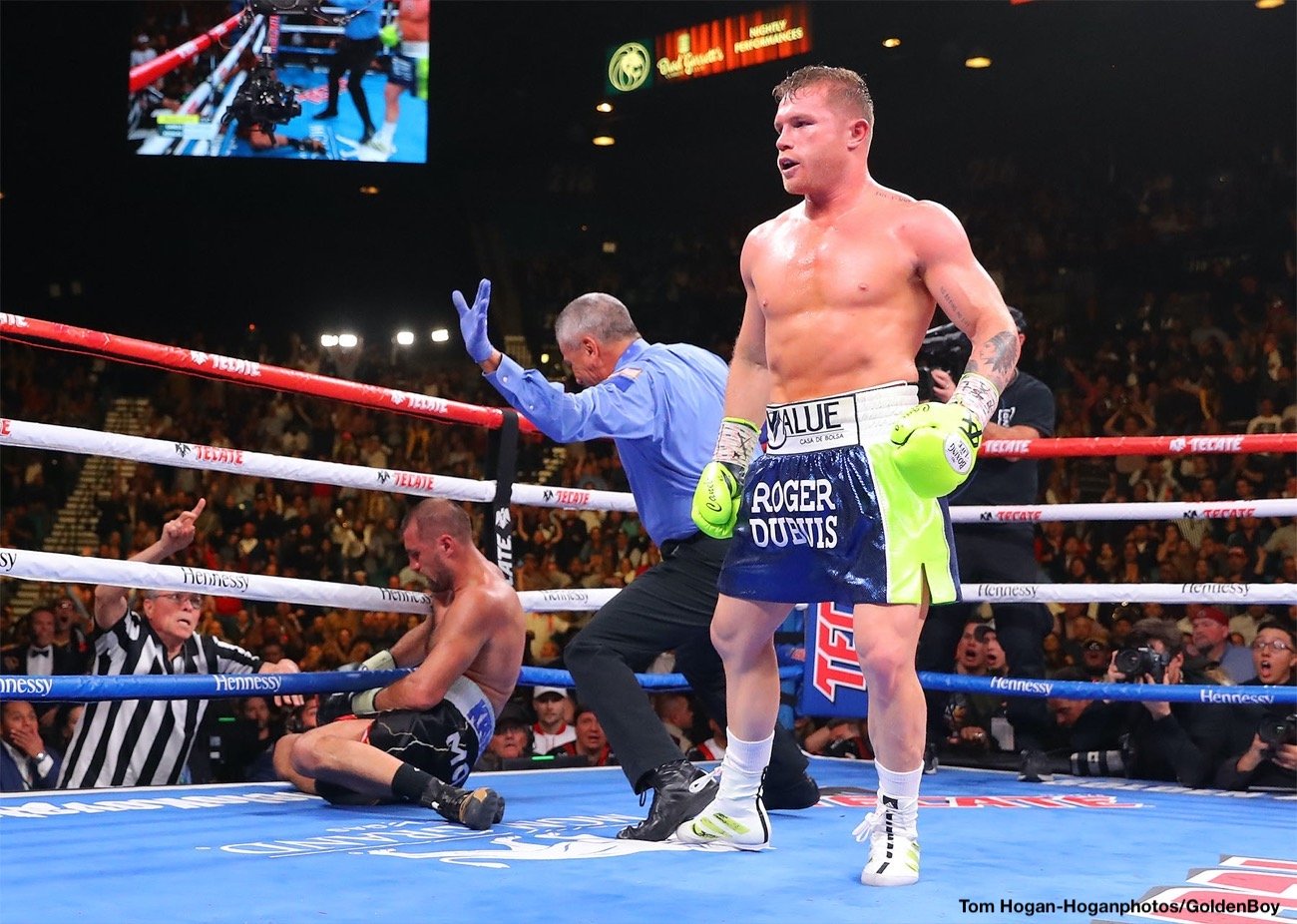 “I was tired after round 6, because I had my last fight very close to this one, but it’s okay, it’s a new experience for me. Canelo is really a great champion. A little bit right now, I didn’t recover from my last fight. But it’s okay. Thanks for the fight Canelo, I have big respect for him. He made history.”

“I know that I can be a unified champion, let’s make a unification fight. But nobody wants to fight me in my division. This guy is more fresh, he came into my division more fresh. He has more stamina, but it’s okay, it’s a good experience for me.” 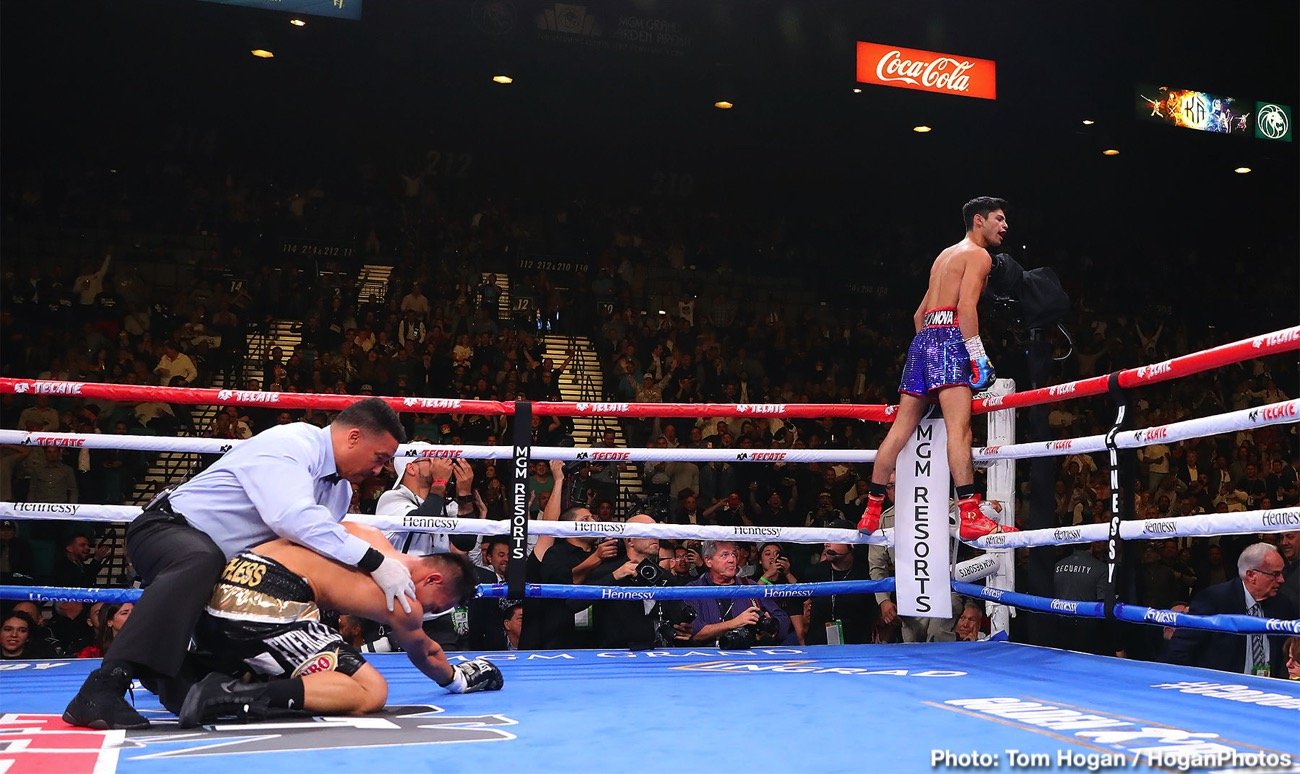 “I feel good. It’s kind of what Ii expected. All respect to Duno, he came to fight, he came in shape, he caught me with an overhand right and I took it and from there Ii knew I could keep taking them and keep coming at him. When I took his best shot, I knew alright, I got him. Everybody knows he has a big overhand right, he’s put a lot of people to sleep with that, and then when I took it, I thought – oh okay, that’s what it is. And I felt good from then.”

“He came at me like a bull. I was like damn, oh shoot, I was trying to move out the way. I’m like, okay I’m going to start swinging. I’m going to let mine go then. I tried to fake with the overhand, jab right, bang bang, and it’s over – temple shot. Once you hit the temple, it’s almost over right there. There’s three places to knock somebody out, it’s right in the temple, behind the ear, and right in the chin. You hit anywhere with a solid punch and it’s over.”

“I’m just learning my overall game, footwork, speed, power, I’m just soaking it in. With Canelo there, it’s an honor. It makes me feel good just watching him spar, watching him train. He tells me I’m gonna do good, and I feel good.”

“I just want better competition, the more I step up. I’m only 21 and a lot of people forget that. But I’m going at my pace, whatever I feel I’m ready for, I’ll take on. Those fights down the line are huge fights, once my team feels I’m prepared. I’m always going to listen to my team.” 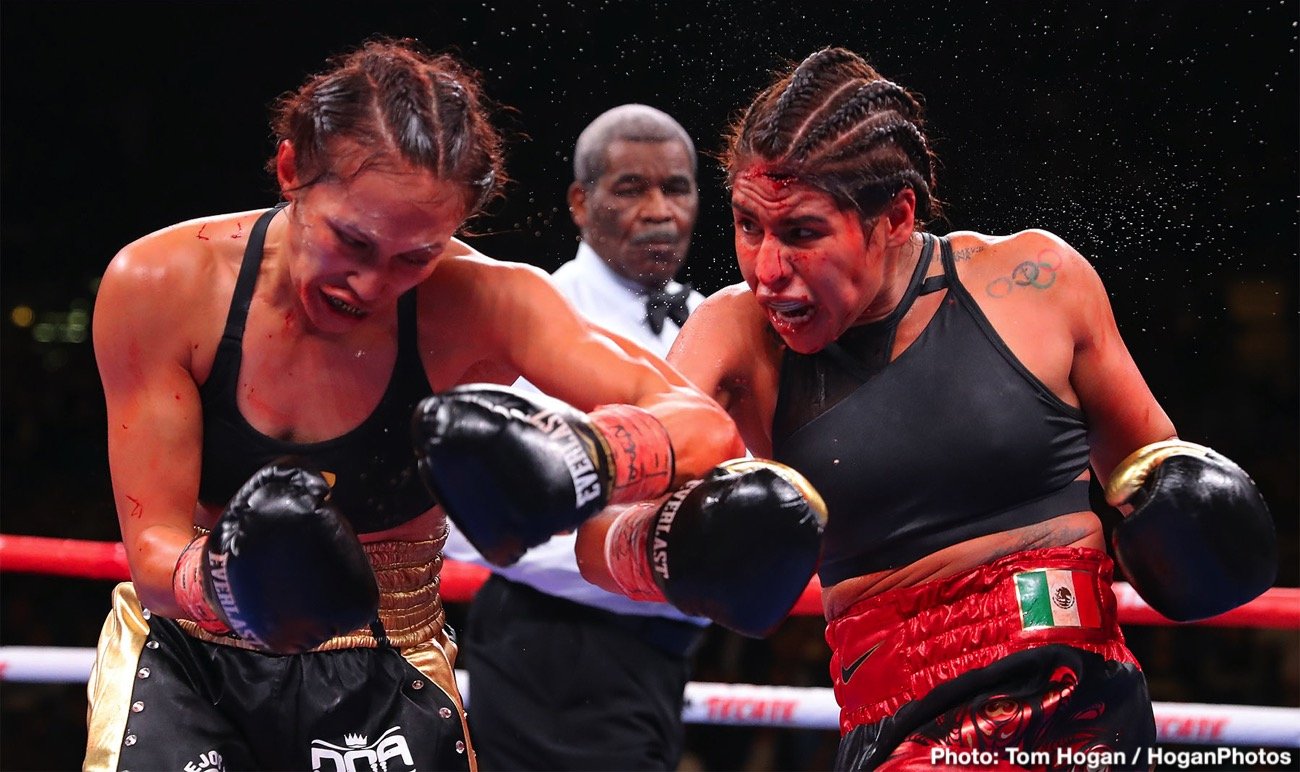 “I had an amazing training camp and I felt great tonight. Head butt or not, I still whooped her ass every round. I didn’t really target it too much. I felt great, I’m made for the late rounds. I can go 15 rounds, take it back old school.”

“It didn’t’ change my fight. l I fought with a gash on my head, blood was dripping down my face, I still won the rounds because I’m a fighter, that’s what I do.”

Rematch? “I mean, no, I clearly won every round head butt or not, and I mean, this isn’t even my weight class. I came up to fight her.”

“Of course there’s a difference because I walk around at 113, 112. Every week here in Vegas, I was eating breakfast, lunch, and dinner. She was underestimating me, I don’t hit like a 108 pounder. I hit like a middleweight. I would like to go to 108 pounds and fight one of the champions there. I want belts.”

“No, the beef is not settled. Respect to her team, but I still don’t like her.”

On the headbutt: “You know, it was early. So I was really trying to decide if it was ok or not. I’m sorry guys I couldn’t continue but I couldn’t see anything. I could have stopped after the 3rd round, 4th round, whenever it happened, but it was really hard to deal with, it was really hard to see. I didn’t think I was losing that many rounds at all though. She says she has a lot of power, she doesn’t , it was a headbutt. I continued fighting but I had to stop because I couldn’t see. I think it was a poor decision. Some of the rounds she did win, but it wasn’t like that. I couldn’t see.”

“It was multiple headbutts. A lot of times when we were clinching, and you saw me leaning in, it was because she rushed in with the headbutt. A lot of times it was making me dizzy. There wasn’t anything I could do with her head, I really thought I was winning. I could have gone two more rounds at the beginning, I was like, I’m just going to keep going. But I couldn’t see. I think it was a bad decision at the end. I didn’t think I lost that many rounds. I want to be sad but I can’t, because I got head-butted really early.

“I was really surprised. I didn’t feel that was what was happening at all. I was landing the punches on the outside, she was landing stuff on the inside after she head-butted me. I think the score cards were bad. Without that headbutt, It would have been a completely different story. It’s unfortunate.” 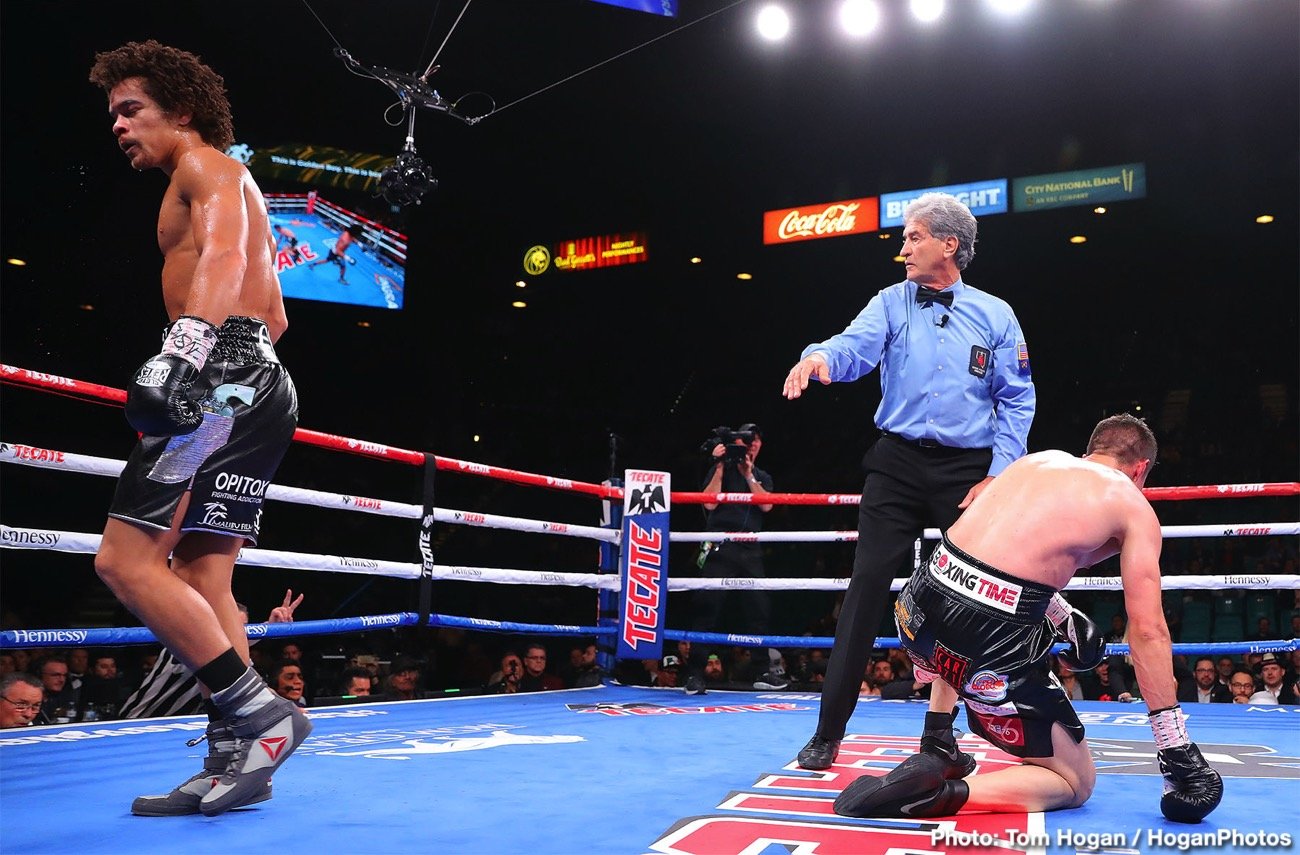 “Absolutely it was a wonderful performance. I tip my hat off to my opponent, he’s a tremendous athlete, he has tremendous power. All of his wins come by knockout. He caught me with one good shot in the first round but then I doubled back and came back. I am the definition of perseverance. I am the most exciting fighter today.”

On hitting the canvas Round 1: “I thought it was a tremendous shot to the back of the head, I thought it would come over the head but it caught me right behind the head. I just got right back up and was like okay, now it’s game time baby. It didn’t change anything. I got right back on my horse and kept persevering and working my plan, boxing taking him down, breaking him down, throwing body shots, head shots, mixing it up. And then I got a little bit dangerous with it, I got a little bit closer, and then I got that knockout baby.”

On knocking down Ortiz in Round 6: “I seen what I’ve always seen. My heritage coming from Mexico, from Guadalajara, I got back up, and we duked it out like real true champions. I’ve boxed in Mexico, I’ve boxed in Philadelphia, and now I’m back to the city lights of Las Vegas, Nevada. Woo! Nobody can stop me. Viva Mexico.”

“I love the way the fans have treated me because hey it’s all about the passion. Either you cheer for me or boo for me, it doesn’t matter, as long as you love it, as long as it’s an exciting fight. I’m ready for anybody, anytime, anywhere. Blair ‘The Flair’ is not scared of anybody. I’m getting closer, I’m boxing the inside, I’m boxing the outside, there’s nothing I can’t do.”

Evan “Yung Holy” Holyfield (1-0, 1 KO) of Atlanta, Georgia stopped Nick Winstead (0-2) of Abita Springs, Louisianavia TKO in the first round of a four-round middleweight fight. Holyfield won with time of 0:16 of the aforementioned round.

“I knew he was tough, he had twice the pro experience I did,” said Tristan Kalkreuth.
“He’s pretty much a veteran but for that being my third fight I think I did good. I wish I put more punches on him and obviously the one thing that boxers want is to get the KO and that didn’t happen but I know this fight is going to help me later down in the road. I want to thank all my Latino fans for coming out here!”

Meiirim “The Sultan” Nursultanov (13-0, 8 KOs) of Merki, Kazakhstan defeated
Cristian Olivas (16-6, 13 KOs) of Mexicali, Mexico via unanimous decision in a 10-round fight for the USNBC Middleweight title. Nursultanov won with three scores of 100-90.

“I feel good. I prepared well for this opponent,” said Meiirim Nursultanov.”I know this guy, tough guy. I was ready and prepared for all 10 rounds. Thank you everybody, I want to say thanks to those that support me. I want to say hello to Kazakhstan, I love you.”

Bektemir “Bully” Melikuziev (3-0, 3 KOs) of Indio, Calif. stopped Clay Collard (4-2-3, 1 KO) of Las Vegas, Nevada via TKO in the fourth round of a light heavyweight fight originally scheduled for eight rounds. Melikuziev won with time of 2:22 of the aforementioned round.

“I was very surprised at how durable he was,” said Bektemir Melikuziev . “But it was a good experience. He was very tough. I needed this to get rounds of experience.”

Fight season on DAZN continues next weekend on Nov. 9 for the rematch featuring YouTube stars KSI and Logan Paul going pro at the Staples Center in Los Angeles.


« Boxing Results: Canelo knocks out Kovalev in 11th round