Manny Pacquiao to fight in March or April 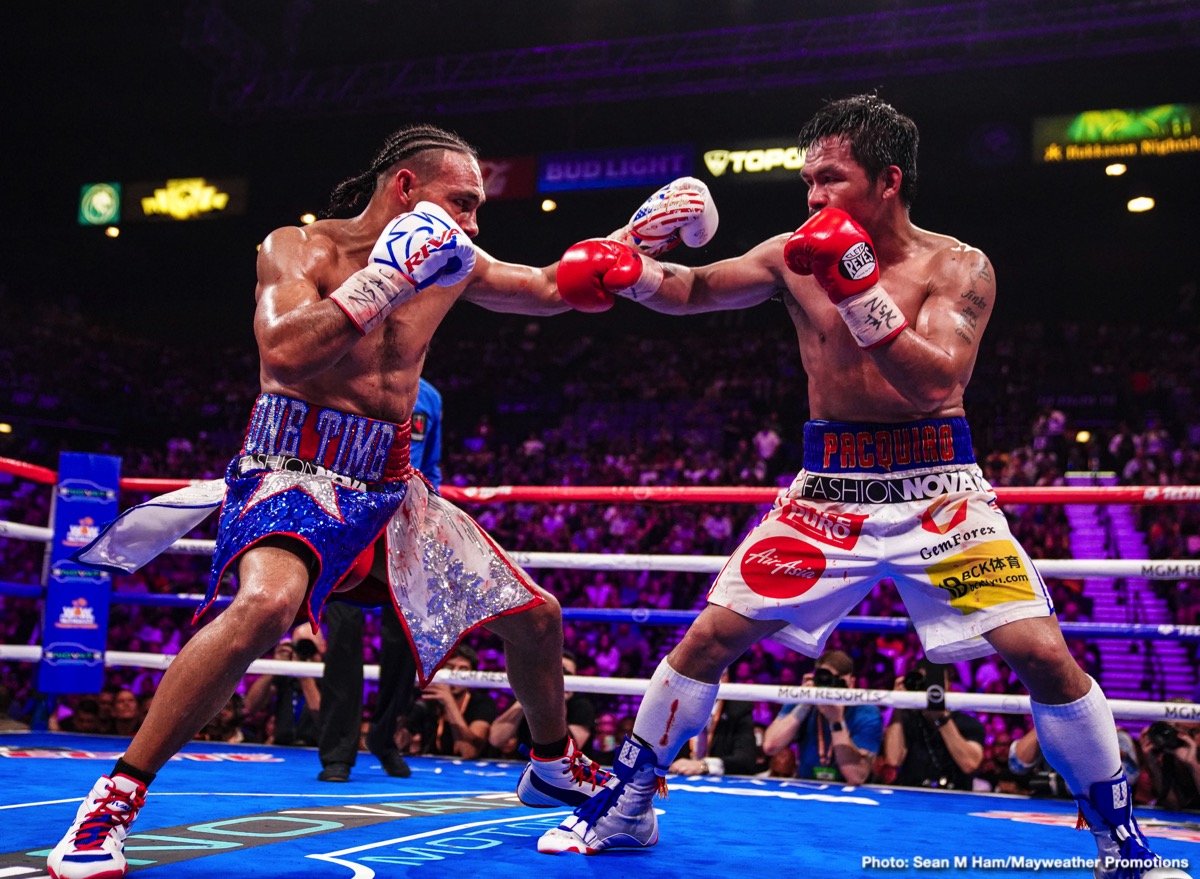 By Chris Williams: Manny Pacquiao plans on returning to the ring in March or April against possibly Danny Garcia or Mikey Garcia, according to the Manila Bulletin.

Pacquiao (62-7-2, 39 KOs) will be out on recess from his senate job in the Philippines during that time frame. Manny has a break from March 14 to May 3. The date they’re looking at is potentially April 11 for his fight.

Pacquiao, 40, is coming off one of the biggest wins of his career in beating WBA Super World welterweight champion Keith ‘One Time’ Thurman by a 12 round unanimous decision on July 20 on Fox Sports PPV in Las Vegas, Nevada

Pacquiao’s trainer Freddie Roach likes the idea of him facing Danny ‘Swift’ Garcia (35-2, 21 KOs) for his next fight. Mikey Garcia (39-1, 30 KOs) is coming off of a one-sided loss to Errol Spence last March, and doing nothing. Mikey has made it known that he VERY much wants to fight Pacquiao next, but he’s not helped himself by staying busy.

“I can fight in March, April because the Senate will be on break during that time,” said Pacquiao to mb.com.ph.

Sean Gibbons, who works with Pacquiao, say there’s no date yet for his fight, but he’ll be fighting in the first half of 2020.

Manny is with Premier Boxing Champions, and that’ll make it easy for him to be matched against Mikey Garcia, Danny Garcia or one of their other fighters. Former WBC welterweight champion Shawn Porter would obviously jump at the chance to fight Pacquiao, but he’s coming off of a loss to Errol Spence. It’s not an ideal time for Porter to be trying to get a fight against Manny.

There would be some interest from boxing fans in a Pacquiao vs. Danny Garcia fight, but not a lot. Garcia lost to Porter by a 12 round unanimous decision last year in September. Danny rebounded from that loss to defeat Adrian Granados, but he hasn’t faced anyone good to redeem himself.

Amir Khan is another fighter that has mentioned wanting to fight Pacquiao. His situation is similar to that of Porter. Khan lost to WBO welterweight champion Terence Crawford bya 6th round knockout last April on ESPN PPV.

It was a bad performance by Khan, who was completely outclassed by Crawford before the fight was stopped in the 6th. Khan’s trainer Virgil Hunter pulled him out of the fight due to a low blow he suffered. It looked to some like Hunter didn’t want to keep him in there to watch Crawford finish him off.

Pacquiao is off the hook for a fight against Spence. The IBF champion Spence was injured in a car crash last October in Dallas, Texas, and it’s unknown when he’ll be able to return to the ring.