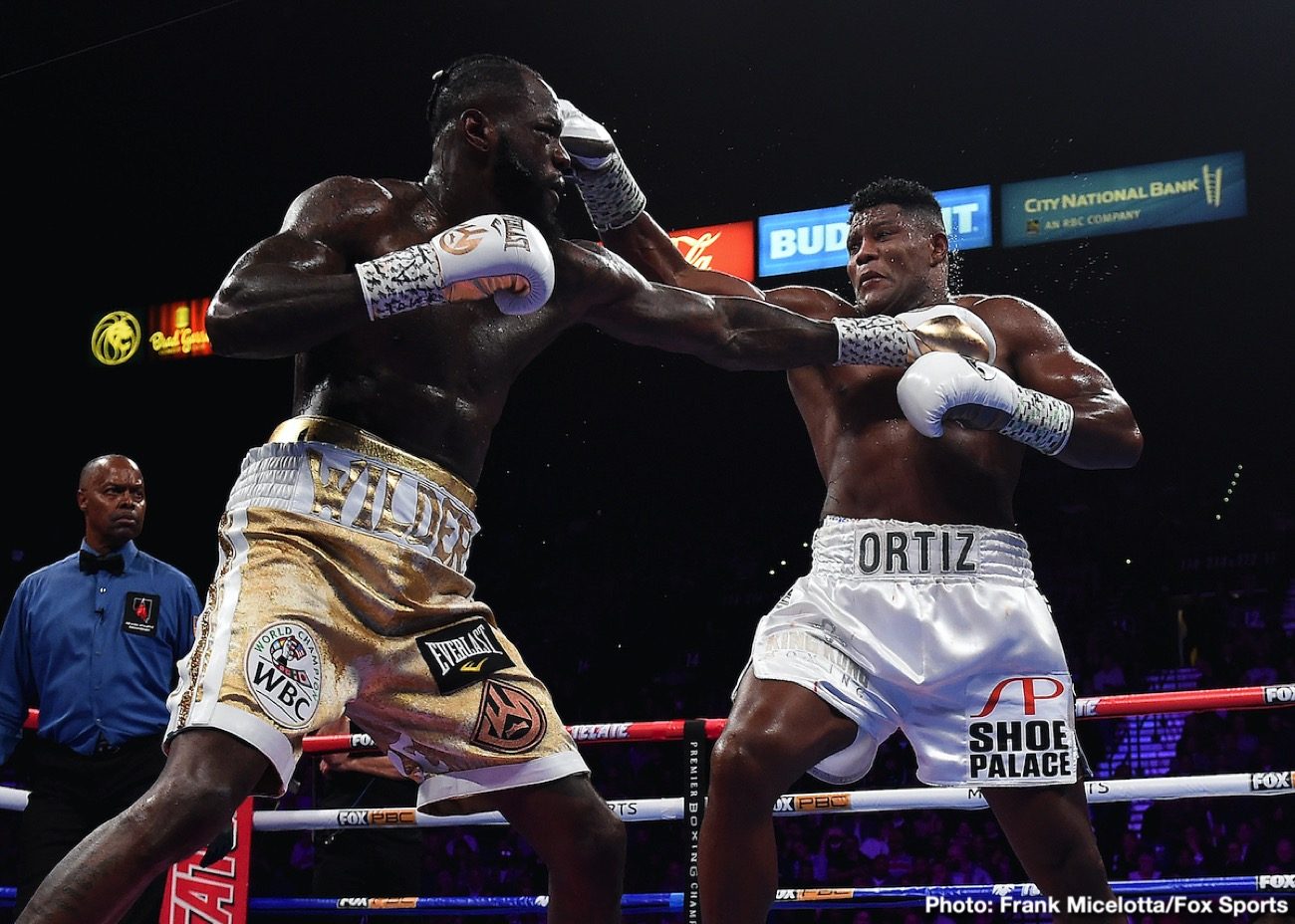 By Dan Ambrose: Luis Ortiz’s strength and conditioning coach Larry Wade believes his fighter would have beaten WBC heavyweight champion Deontay ‘Bronze Bomber’ Wilder last Saturday night in Las Vegas if not for that right hand that he was hit with in round 7.

Wilder (42-0-1, 41 KOs) was being systematically out-boxed by the Cuban southpaw up to that point in the fight, and looked like he wasn’t going to be able to change the outcome with his right hand like he’d done in the previous fight between them.

Wilder was waiting for that one punch

Wade says Wilder had the strong belief that he only needed one punch to win the fight, and therefore he wasn’t going to bother working hard for 12 rounds the way that Ortiz did. Wilder was just going to wait for that one opportunity for him to land his right hand, and it worked for him.

In contrast, Ortiz worked hard every second of the fight, looking to break Wilder down, and stop him with a left hand. It worked for Ortiz in the first six rounds with him building a wide lead, but he wasn’t ready for that right hand from Wilder in the 7th.

“I didn’t see the punch happen based on the people in front of me, and I caught just the last part,” said Ortiz’s strength & conditioning coach Wade to Fighthype. “Up to that point, he’d shown me everything that I wanted to see. I think he was moving fast, pivoting well, feet were moving well, fast, really fast. So he was able to get a lot of punches off. He didn’t get tired.

“He seemed like he was in good fitness. I thought it was a great show, and I just wish we didn’t get caught with that punch. And I think if that punch didn’t happen, he wins that fight. I didn’t,” said Wade when asked if he saw fatigue setting in with Ortiz.

“I’m not going to lie and say it feels good. It’s probably one of the hardest feelings you can ever have. I care so much about him. He did such a great job for me.

Wilder would have caught Ortiz sooner or later

Coach Wade is assuming that Wilder wouldn’t be able to hit Ortiz with a similar huge power shot in rounds 8-12, and that might be a little naive on his part. What’s different about the 6’7″ Wilder compared to other fighters is he carries his power through the entire 12 rounds. In other words, Wilder is just as dangerous in round 12 as he is in the early rounds. So even if Wilder didn’t land that big right hand of his in the 7th, he would have landed that shot sooner or later in rounds 8-12.

The issue Ortiz had is he would have needed to be just as careful in the second half of the contest as he’d been in the first, and he failed to do that. Ortiz was too aggressive in the 7th, and he paid for it when Wilder found an opening for his right hand.

Ortiz has enough at 40 to compete with the elite

“I totally think he has enough,” said Wade when asked if Ortiz has enough at age 40 to compete with the other elite heavyweights in the division. “Listen, you can’t name 4 guys or 3 guys better than this guy. You can name one, Deontay. That’s the only one that has proven it. There’s no one else you can say that is better than him, and you have to prove that to me.

“Let them get in the ring. He’s an amazing boxer, he’s serious, and he’s a hard worker. I can’t accept anything other than that. He is a championship boxer for a reason. I can’t speak for the team for who they want to put him in with next, but I don’t care who they put him in with next. Honestly, you pick one. Joshua, Ruiz, Fury, it doesn’t matter, and I think he can compete with any of them,” said Wade.

The only fighter thus far to beat the talented Cuban fighter Ortiz is Wilder, who has now done it twice. Since there’s no one that can punch like Wilder, it would be a mistake to assume that Ortiz loses to guys like Andy Ruiz Jr., Anthony Joshua, and Tyson Fury. Those guys lack the equalizer that Wilder possesses.

Ortiz’s stamina looked better for this fight with Wilder compared to in his first match with him a year ago.

“The workouts I did with Ortiz, people said, ‘You can’t train a heavyweight like you do a welterweight.’ I say, ‘why?'” said Wade in talking about his workouts he designed for Ortiz. “They still have to go 36 minutes. Unless there’s a different clock that I don’t know about. So I train a guy for the timeline.

“For 36 minutes, he has to be agile, he has to be able to throw punches. And if I’m not mistaken, punch counts matter. With that being said, I train him just as hard as I would train Shawn Porter, Badou Jack, Caleb Plant, even though he’s a heavyweight. I didn’t take it easy on him. He trained hard,” said Wade.

It sounds like Wade put Ortiz through a really tough training camp in preparing for the Wilder rematch. However, we don’t know whether Ortiz’s stamina would have held out for the full 12 rounds, and he might have gassed.

It appears that Ortiz was showing signs of slowing in round 6, but he was fighting well in the 7th. In the last 10 seconds, Ortiz was caught with a right hand from Wilder that put him down. Conditioning was no longer an issue at that point.

Deontay was willing to give away rounds

It was clear all along in watching the fight that Wilder was going to stay patient this time, and wait for one big shot. The Bronze Bomber Wilder found out the hard way in rounds 1 and 2 that he couldn’t start throwing lead right hands repeatedly without putting himself in danger.

So instead of doing that, Wilder waited for that right time to land a single right hand to end the fight. It worked against Ortiz, but it was a risky thing for Wilder to do. If Wilder didn’t find an opening to land a big enough shot to stop Ortiz, then he would have lost by a wide 12 round decision.

Fury vs Sour: “The Fans Will See A Hungrier Fighter” »