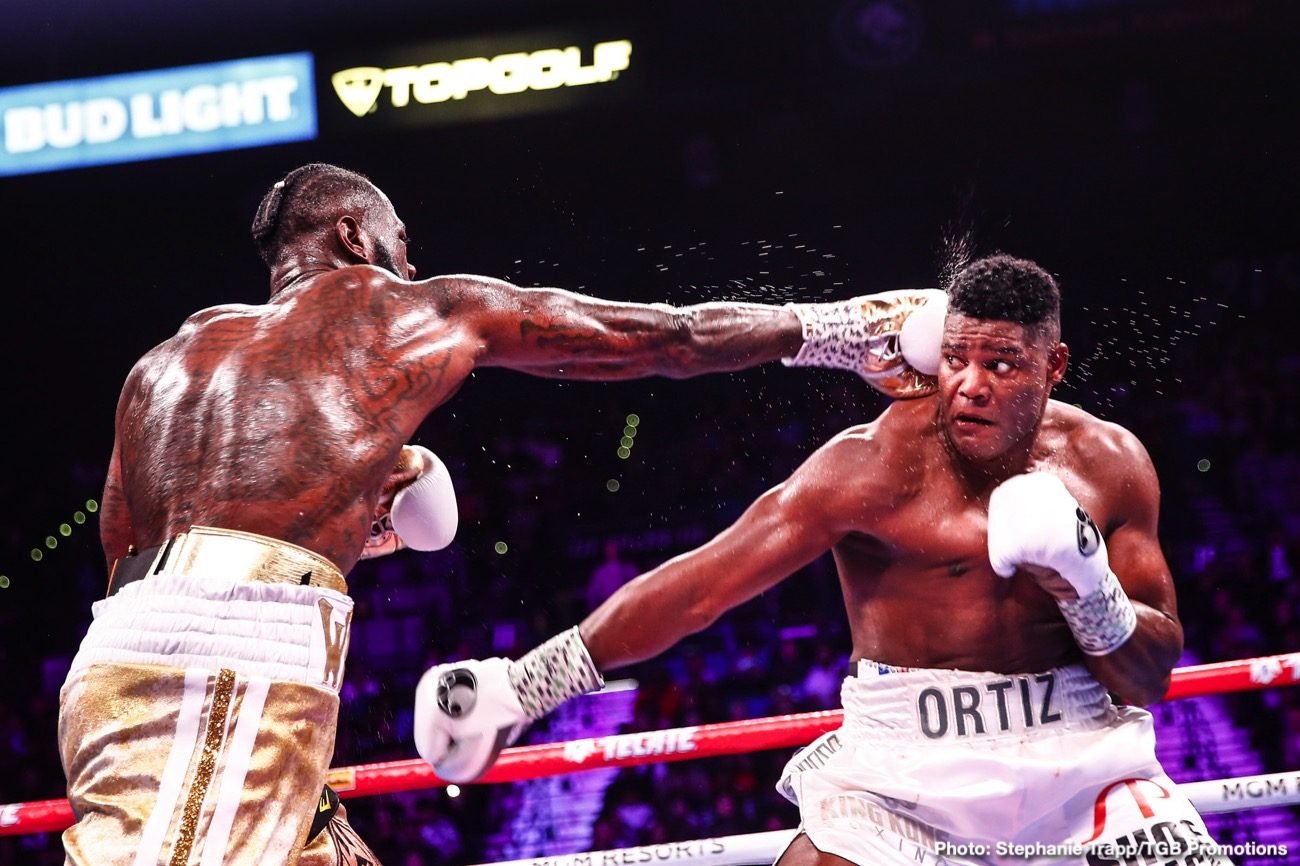 By Kenneth Friedman: Luis ‘King Kong’ Ortiz had WBC heavyweight champion Deontay Wilder trailing badly in the 7th when got caught by one of the Bronze Bomber’s trademark right hands. Ortiz let his guard down for just a second, Wilder capitalized by nailing him with a right hand that sent him down. Referee Kenny Bayless counted Ortiz out, although it looked like he rose to his feet in time to beat the count.

“I said it was either going to be him or me,” said Ortiz after the fight.

It was a game effort by Ortiz, but he came up empty against the knockout artist Wilder for the second time.  The fight was winnable for the Cuban southpaw Ortiz, but he couldn’t take Wilder’s power. That game-changer of a fight hand by Wilder was too much for Ortiz.

Ortiz made it clear after the fight that he’s NOT going to be retiring from the sport, because wants to win a world title. In the meantime, Ortiz says he’s going to take take his frustrations out on the other heavyweights in the division.

Ortiz only needed to hold onto his wide lead for another five rounds, and he would have been crowned as the NEW heavyweight champion. Instead, Wilder (42-0-1, 41 KOs) pulled out the victory in knocking out the highly skilled Ortiz (31-2, 26 KOs) at the MGM Grand in Las Vegas, Nevada.

“Retirement is not in my plans,” said Ortiz after the fight. I’m going to take out my frustrations on the other heavyweights that want to challenge me. Anyone that thinks I’m old, well step up.”

“In a while. It’s up to Al Haymon,” said Ortiz when asked who he’ll fight next.

“I got caught. I slipped the punch wrong. I’m in shock and disappointed,” said Ortiz.

It’s going to be up to Ortiz’s adviser Al Haymon at Premier Boxing Champions to find him some compelling fights. Ortiz wants to make the other top heavyweights pay for his defeat, but he’ll need cooperation on their part to agree to fight him.

Before Wilder “blessed” the talented Cuban Ortiz in giving him 2 fights, he wasn’t getting fights against the big names in the heavyweight division. None of the top guys were willing to fight him, and he was getting older without getting the opportunity to prove himself.

After this second loss for Ortiz, it could possibly help him get fights against the best heavyweights. If they feel they can do what Wilder did, then Ortiz could get a big fight. He’s aiming low for the time being in making it known that he would like to face the loser of the Anthony Joshua vs. Andy Ruiz Jr. rematch on December 7th.

If Ruiz loses to Joshua, then he would be a viable option, because both guys are with Haymon. However, If Joshua gets beaten by Ruiz, then there’s probably no chance for Ortiz to face him. He’s with Eddie Hearn, and he won’t want Joshua to walk the plank by taking a risky fight against Ortiz, especially after a second loss to Ruiz.

Luis Ortiz one of the most DANGEROUS heavyweights – Wilder

“He’s definitely one of the most dangerous men in the heavyweight division and there’s a reason why the rest of these heavyweights do not want to fight him,” Wilder said. “Hopefully, they’ll give him the opportunity that he truly deserves.”

Wilder is right about there being no reason why the other heavyweights shouldn’t fight Ortiz, but they probably won’t. The way that Ortiz was out-boxing Wilder in the first six rounds might scare away the top heavyweights, because that could happen to them as well. Moreover, they don’t have the game-changer right hand that Wilder possesses to bail them out against Ortiz.

Haymon will find someone for Ortiz to fight, and it might be someone with talent. Ortiz will need to prove that he can beat some of the young lions in the top 15 for him to get another word title shot in a speedy fashion. There’s too long of a line in front of Ortiz for him to be handed another title shot in the near term.

Deontay was getting out-boxed by Ortiz – Caleb Plant

“I wasn’t surprised. The only thing I was going to be surprised about is if it went 12 rounds,” said IBF super middleweight champion Caleb Plant to Fighthype about Wilder’s knockout win over Ortiz. “Deontay has got that equalizer, and he’s only got to be perfect for one second, and he was. 5-1 for Ortiz, if not 6-0,” said Plant when asked who he had ahead at the time of the stoppage.

It was almost embarrassing to watch how Ortiz was taking Wilder to school in the first six rounds, and it didn’t look like Deontay was purposefully not trying. He was giving it his all, but Ortiz kept countering him with shots when he would throw anything of substance.

The only punch that was safe for Wilder to throw was his left jab. He didn’t get countered when he threw those, but weren’t powerful enough for him to win rounds. Ortiz was the one landing all the hard shots, and it made it easy for the judges to score the fight.

“Ortiz had great defense, moving his head, blocking punches, working up and down,” said Plant. “Looking down and feinting, and coming up on top with a left hand, and sometimes going down to the body. He was boxing beautifully, but you only got to be right once, as I was saying. He [Wilder] can be down 11 1/2 rounds, and been knocked down in every round, but it’s not over until the fat lady sings.

“A lot of people feel like that, and a lot of people wish they could punch like Deontay. I’m rocking with Wilder,” said Plant when asked who wins between Wilder and Tyson Fury. “The same way he does every time. Stylistically, it could very well end up like that [Wilder being down on the cards]. But like I say, he could be down 11 1/2 rounds, and it don’t matter,” said Plant.

The skills that Ortiz showed are the type that other heavyweights would love to have, but it’s impossible. Ortiz brought up in the Cuban system, and he was developed into an outstanding over the course of many years. Wilder got into boxing late, and he didn’t have the benefit of being in an amateur program like Ortiz.