Logan Paul – ‘KSI had his window’ 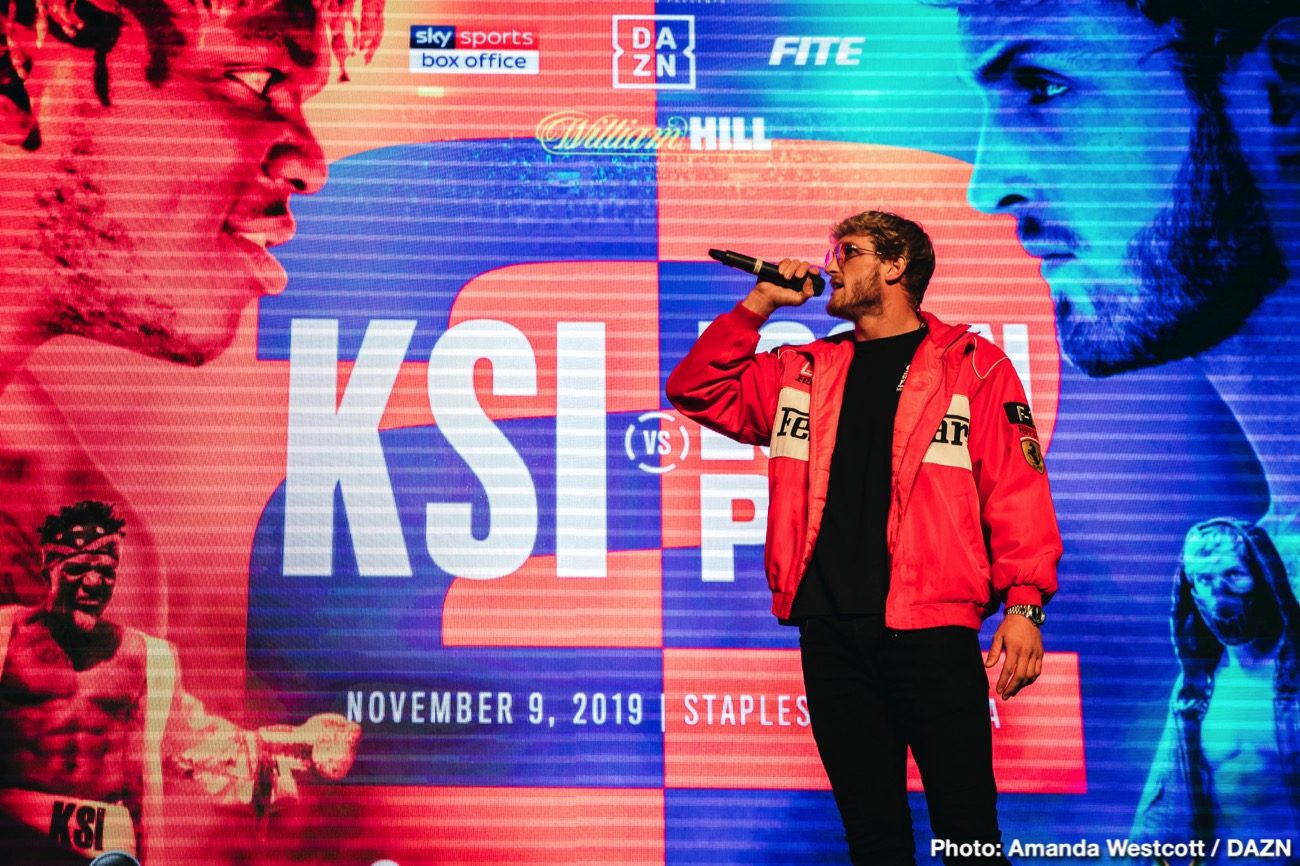 By Sean Jones: Logan Paul and KSI are facing each other this Saturday night in their long awaited rematch at the Staples Center in Los Angeles, California. Paul, 24, says he’s made a lot of improvement in his game since their previous fight last year.

That was scored as a six round draw. Paul admits that he didn’t know what he was doing at the time, as it was his first fight. He gassed out after two rounds, and was lucky to get a draw. Unlike the first fight, Paul and KSI won’t be wearing head-gear protection.

The fight will count as a professional match, even though neither guy intends on going anywhere in boxing. This is just for fun. Both in their mid-20s, it’s way too late for a fighter to go anywhere in boxing at the professional level. Realistically, fighters have to start out as teens in boxing if they want to develop into a world champion.

KSI had his window and it’s passed – Logan Paul

“I don’t want to say that I was nervous, but I was uncertain of the outcome,” said Logan Paul to secondsout.com. “Again, I kind of knew to box, but not really. But this year there’s an overwhelming confidence that I didn’t have last year. And I think you guys are going to see that in all the media in the lead up to the fight, and especially in the fight.

Quite literally, what doesn’t kill you makes you stronger. If I was going to die, it was going to be last year. If KSI had his window, the window is passed. I am as invincible as they can come at this point in my life or that’s how I feel anyway. Yeah, the window has passed, and it’s unfortunate he wasn’t able to capitalize on that,” said Paul.

The fight is still a 50-50 match-up regardless of what Logan. He’s talking a lot, but there’s a very good chance he’ll gas out again. Just watching Logan shadow box, he was huffing and puffing in throwing punches at the air. He looked exhausted after just a few minutes. The stamina problems that Logan has aren’t going to go away for this fight.

Don’t be surprised if Paul is huffing and puffing after the first round. Luckily for Paul, KSI has no boxing skills whatsoever. He fights like someone that walked into the ring from the crowd. He has no ability at all, but then again neither does Logan. Now that neither guy is wearing head-gear, we’ll likely see a knockout. You can’t predict either way which one will get knocked out, because both are so unskilled and lost inside the ring.

Logan Paul ready to capitalize on mistakes by KSI

“I’m lethal, bro. I’m smart, I’m strategic, and I know how to move like a boxer,” said Paul. “Last year, I moved like an athlete, who just learned how to box. This year, I’m a professional boxer. S—, I sound like a broken record. People are going to be surprised, and say after the fight, ‘Oh, my God. Logan Paul can fight. There’s a real future here. Obviously, I’d like an early knockout, but I’m not looking for anything per say. The only thing I’m going to keep my eyes peeled for is any mistake he makes.

Even the most minor mistakes he makes, and he makes a lot, because he’s sloppy, I’m going to capitalize on it. I am a heat seeking missile for AJ’s errors. Again, if he throws one wild punch or he moves his head in the wrong direction, he’s going to get clipped, and it’s going to be ugly. I was doing a lot of things wrong last year, and Shane, you’re not going to want to hear this, but I took a pre-workout before the fight. I got Adrenalin crowds with 50,000 people watching,” said Logan Paul.

Well, if Logan is going to take advantage of KSI’s mistakes, he’ll need to do it in the first two rounds. If he doesn’t it by then, his stamina problems will wear their ugly head, and he’ll look like he’s in need of an oxygen mask. Logan’s cardio is just terrible. He’s got a lot of muscles, but conditioning is just awful. During the interviews, Logan’s face face was turning red when he talked a lot. What is that? I was concerned about the guy. He was working himself up to the point where his face was beet red from just talking? Hopefully, he’s had a good medical checkup because he doesn’t look fit for a boxing match in this writer’s opinion.

“It was a lot, and I can handle a lot, but it was a lot. 100 to 0,” said Paul about him running out of gas against KSI last year. “It wasn’t like, ‘That round was hard, and I’m beginning to feel tired.’ It was like the end of round 2, ‘I’m a f—- animal.’ At the beginning of round 3, I’m like, ‘I can’t feel my arms.’ It was a crash. That was not normal. It wasn’t physically normal. There was no gradual decline. So yeah, this fight is going to be a little different.

“I’m sparring 10 rounds everyday or three 10 minute rounds everyday.I don’t know. JJ’s game plan is to rely on me getting tired, because it seems like that’s what he’s planning to do, it’s going to slap him in the face when he realizes that’s not going to happen,” said Paul.

It’s a good game plan for KSI to count on Logan to gas, because he gassing just from throwing punches into the hands of Shannon Briggs. If Logan can’t even do that without gasping for breath, then how is he expected to beat KSI?