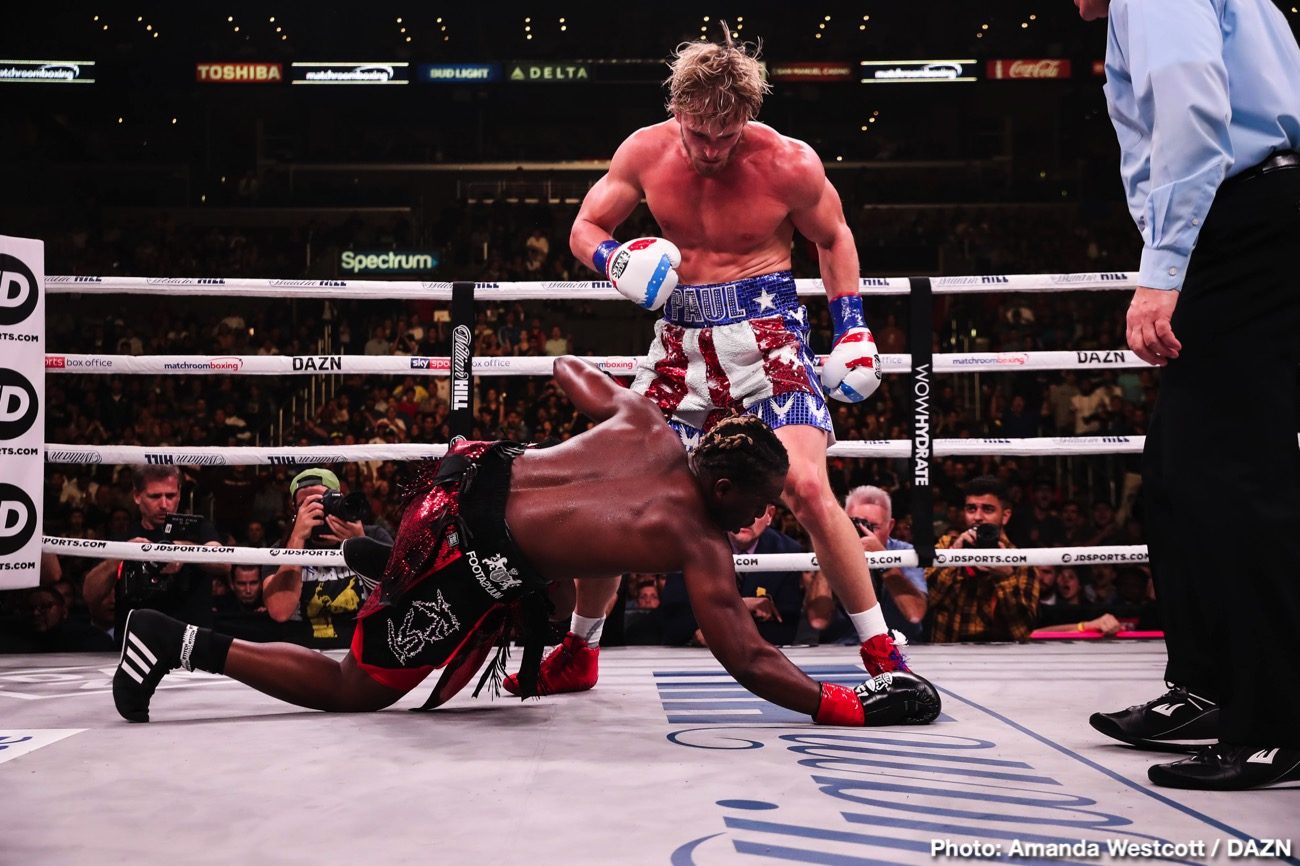 By Sean Jones: Logan Paul is an unhappy camper a day after losing a six round split decision to KSI in their rematch last Saturday night in their YouTube grudge match at the Staples Center in Los Angeles, California.

The 24-year-old Paul’s issue is with the way referee Jack Reiss inserted himself into the final outcome of their fight by taking two points away from him for hitting KSI with a shot while he was down in the 4th round. Paul feels that Reiss should have given him a warning rather than taking away two points on the spot.

Generally, referees take one point away for a foul of that kind, but Reiss took it a step further by docking Paul two points. As it turned out, the two points that Reiss deducted from Paul essentially gave the victory to KSI. The judges’ scores were 57-54 and 56-55 for KSI, and 56-55 for Paul. If you take away the point deduction, Paul would have won the fight by a six round split decision.

Logan says he plans on talking to the California State Athletic Commission to have them make a ruling on the point deduction. It’s unclear what Logan will gain from this though, as the casual boxing fans already saw him lose. KSI isn’t a professional boxer, and he already ruled out facing Logan in a trilogy fight.

“No it’s done, it’s done, I’m on to the next thing,” said KSI in response to a question of whether he’ll fight Logan again.

Logan had his chance to try and win the fight, but he fell short. The Commission isn’t likely to change the results of the fight. Where Paul went wrong is his failure to follow the instructions of his coach Shannon Briggs, who told him repeatedly to throw right hands. A true professional boxer would pay attention to what his trainer was telling him, and goes out and follows their orders.

When you get a professional that is unwilling to do that, they fail to win their big fights. Logan couldn’t follow Briggs’ instructions, and he not surprisingly lost the fight because of that. It takes a certain type of person to follow instructions. Obviously, Logan does what he pleases inside the ring, and he’s kind of rudderless and lost. He’s the worst kind of fighter.

NEWS:   Lomachenko: Teofimo making a mistake if he tries to Bully him

Novice fighters and amateurs can’t be counted on to carry out their trainers instructions. Paul was unwilling or unable to do what Briggs was telling him to do in asking him to attack with his right hand. Instead of throwing rights, Logan jabbed and fought defensively. With KSI trying to land home run power punches in each round, it made the fight fairly simple to score.

“I would love to contest the commission, because I think I should have got a warning,” said Logan Paul. “I was more calm this year. We worked on my conditioning. The more I practice being in here, the more comfortable I get. Boxing is a weird type of earned conditioning, and that’s all it was.”I’ll be back. I’m coming for the commission on that. I don’t think that was fair at all.”

It won’t be the end of the world if KSI chooses not to fight Paul again. KSI is a mediocre fighter at best, and Paul can do much better if he wants to continue his boxing career. There are literally tons of far more talented guys Paul can fight if he’s serious about wanting to box on. But if he’s focused on celebrity matches, then obviously it’ll be a little tougher.

This writer suspects that Logan will get diminishing returns on his celebrity fights. The casuals will get bored of watching Logan fight because he’s not very good, and his stamina is terrible. His unwillingness to throw right hands last Saturday against KSI was more than a little troubling. It was clear that Logan lacked confidence in his conditioning.