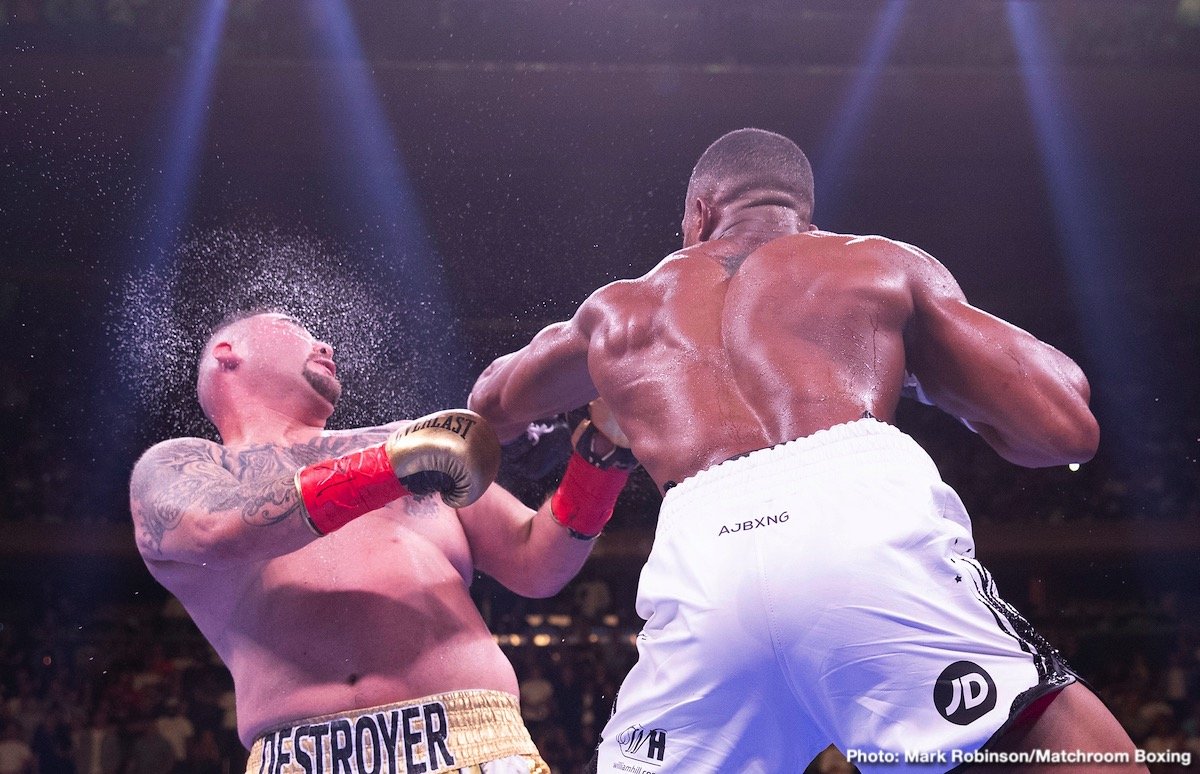 By Charles Brun: Anthony Joshua is making the right noise in the final weeks before his rematch with Andy Ruiz Jr. on December 7. Joshua (22-1, 21 KOs) says his mind is call, but he’s got the “KILLER mindset” as he readies himself for his crucial second fight with the American in Saudia Arabia. Joshua is starting to sound like he’s worried.

That old confidence that he had on his face before his fights is now gone. In it’s place is the strained look of a fighter that has concerns about whether he’s still got it.

Joshua is working out a lot on the track to get lean, and mean for the second fight. This is a match that Joshua afford to lose if he wants to stay on top of the heavyweight division.

Joshua talks about his “KILLER mindset”

“Mindset’s calm, mindset’s cool. Killer mindset, that’s what it’s about. Ice cold, stay in the moment, stay disciplined, just killer. I belong here, I deserve to be here. Everything we do is only for greatness.”

This bold talk from Joshua could backfire on him if Ruiz pulls a repeat, and knocks him out again. Most would agree that Joshua will look ridiculous in the aftermath of the Ruiz rematch

A win for Joshua will turn his career around, and right the wrongs of what happened last June in his 7th round knockout defeat to Ruiz Jr. (33-1, 22 KOs in New York at Madison Square in New York. That fight was advertised by Matchroom Boxing promoter Eddie Hearn as Joshua’s takeover of American.

By most accounts, it was a complete disaster for Joshua. Although Hearn attempted to defuse the criticism of his fighter AJ after the fight by minimizing Ruiz’s win by calling it a “lucky punch,” the damage had been done. Joshua was crushed by the underdog Ruiz, and there was nothing Hearn could say to negate what had happened.

Ruiz filled in as a replacement last time, and he didn’t have a full training camp. For the rematch, Ruiz has trained hard, and is expected to be even better than he was last une against Joshua.

If Ruiz improves to any great extent for the rematch, it could spell DOOM for Joshua. He couldn’t handle the flabby out of shape 268 pound Ruiz last time, and it would seem likely that he won’t be able to deal with him if he’s in better condition.

Joshua’s paydays could drop off if he loses rematch

Nothing lasts forever when it comes to the big paydays for fading stars. Over the years, we’ve seen many elite fighters watch their big money dry up for their fights when they begin losing repeatedly.

Obviously, that won’t happen overnight for Joshua, but it something that he needs to be concerned with. Joshua’s British boxing fans won’t necessarily bail on him after a second loss to Ruiz, but it could be the beginning of the end. They’re not going to keep paying to see Joshua fight on Sky Box Office if he continues to get knocked out. Hearn will need to work his magic to keep Joshua relevant by matching him against opposition that he’s capable of beating.