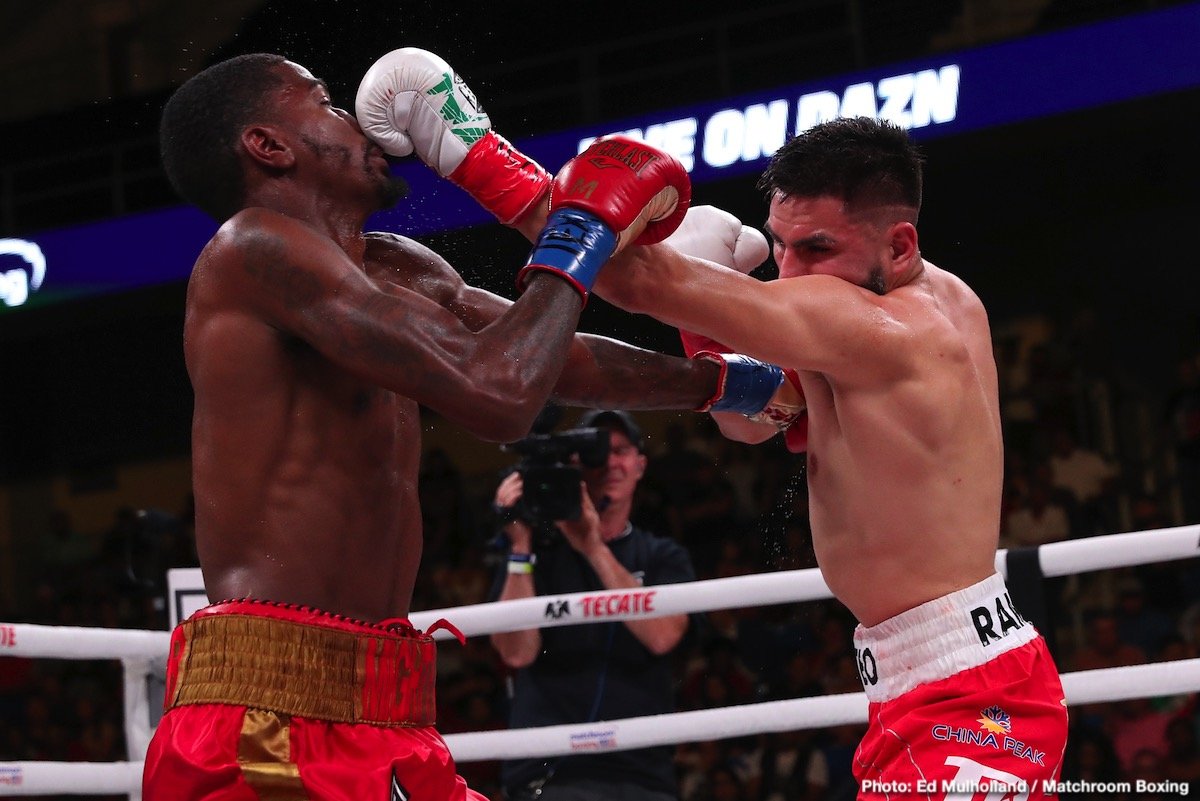 By Tim Royner: WBC/WBO light welterweight champion Jose Ramirez claims that he’s willing to fight IBF/WBA champion Josh Taylor in the UK in the first half in the UK on his network in an undisputed match at 140. Ramirez (25-0, 17 KOs) has some concerns about Taylor’s injured eye from his recent unification match against WBA champion Regis Prograis on October 26.

Ramirez believes Taylor’s injury may necessitate their unification match taking place next Summer, and that’s fine with him. Ramirez, 27, says he’ll face his WBC mandatory Viktor Postol (31-2, 12 KOs) next February if Taylor isn’t ready to fight him at that time, but he’s more than willing to face him right away. Postol can wait until after he faces Taylor, says Ramirez.

Ramirez ready to face Taylor in UK in early 2020

“It really doesn’t matter to me where the fight is. All I need is the ring,” Ramirez said to the dailymail.co.uk about a fight with Taylor. “I am willing to fight on a different (TV) network or whatever…I am willing to go to the UK. If Josh was able to go in the first quarter of the year, I would do everything I can to skip Postol and go straight for all the titles. He needs some time…to let his eye heal properly, so he probably won’t be able to fight until summer,” said Ramirez.

Taylor wants the fight with Ramirez for the undisputed light welterweight championship, but he needs to let his injured right eye heal first. Prograis landed a lot of big shots on Taylor’s eye in the final of the World Boxing Super Series 140-lb tournament on October 26 in London, England. By the 12th round, Taylor’s right eye had closed completely, and he could no longer see Prograis’ shots coming. With the injury, Taylor was forced to move away from Prograis for most of the 12th.

Lightweights Devin Haney and Gervonta ‘Tank’ Davis have both expressed interest in moving up to light welterweight to challenge him for his titles. Gervonta called Taylor out last week, saying he’ll face him at 140, and knock him out by the 7th or 8th rounds. After Taylor responded back to him, Gervonta said he would speak to his adviser Al Haymon to set-up the fight. However, Davis has a fight already scheduled against former featherweight champion Yuriorkis Gamboa on December 28 on SHOWTIME Boxing in Atlanta, Georgia.

Davis and Gamboa are fighting for the vacant WBA ‘regular’ lightweight title. Just how long Davis wants to wait before moving up to light welterweight to challenge Taylor is hard to tell. If Davis doesn’t look good against the 37-year-old Gamboa, then he might not make that move.

Taylor has suddenly found himself very much in demand by the younger fighters in the lightweight division. This could work for Taylor if he’s able to beat them, because it would make him a star in the UK and the United States. It could lead to big money fights for Taylor at 147 if he’s willing to move up to that weight class to chase paydays.

For Haney and Tank Davis to be showing interest in Taylor, they must see weakness in him for them to be willing to make the most. Haney, 5’8″, is two inches shorter than Taylor, but he has a 2 1/2″ reach advantage over the Scottish fighter. Given that Haney has the longer reach, Taylor wouldn’t have much of a size advantage over him. Taylor would need to depend on his power, boxing skills and likely home country advantage for him to beat Haney.

Tank Davis, 5’5 1/2″, would have a tougher time against Taylor, as he would be almost 5 inches shorter. However, Taylor prefers to fight on the inside, and that’s where Davis is at his best with his short power punches. Despite being smaller than American Regis Prograis, the southpaw Davis appears to be a much harder puncher, and he throws combinations better. That means Taylor could have some problems with Davis’ inside game. Prograis was over-matched against Taylor on the inside, and he took a real pounding in their fight last week.

What’s interesting is that Prograis didn’t make adjustments by going to the outside. He stubbornly stuck it out on the inside, and he was battered by Taylor. There were a couple instances in the middle rounds where Taylor looked like he was close to stopping Prograis.

“I spoke to Eddie Hearn the other day and asked him to make the weight with Josh Taylor happen,” said Devin Haney to Fighthype.”I don’t know too many guys at 140.Ramirez [and Taylor]. Those are the only two guys. We have the WBC [lightweight title]. So that looks like the fight that would happen [against Ramirez]. Me and Ramirez sparred together a little less than a year ago.”