Jacobs vs. Chavez winner could face Saunders or Callum Smith next 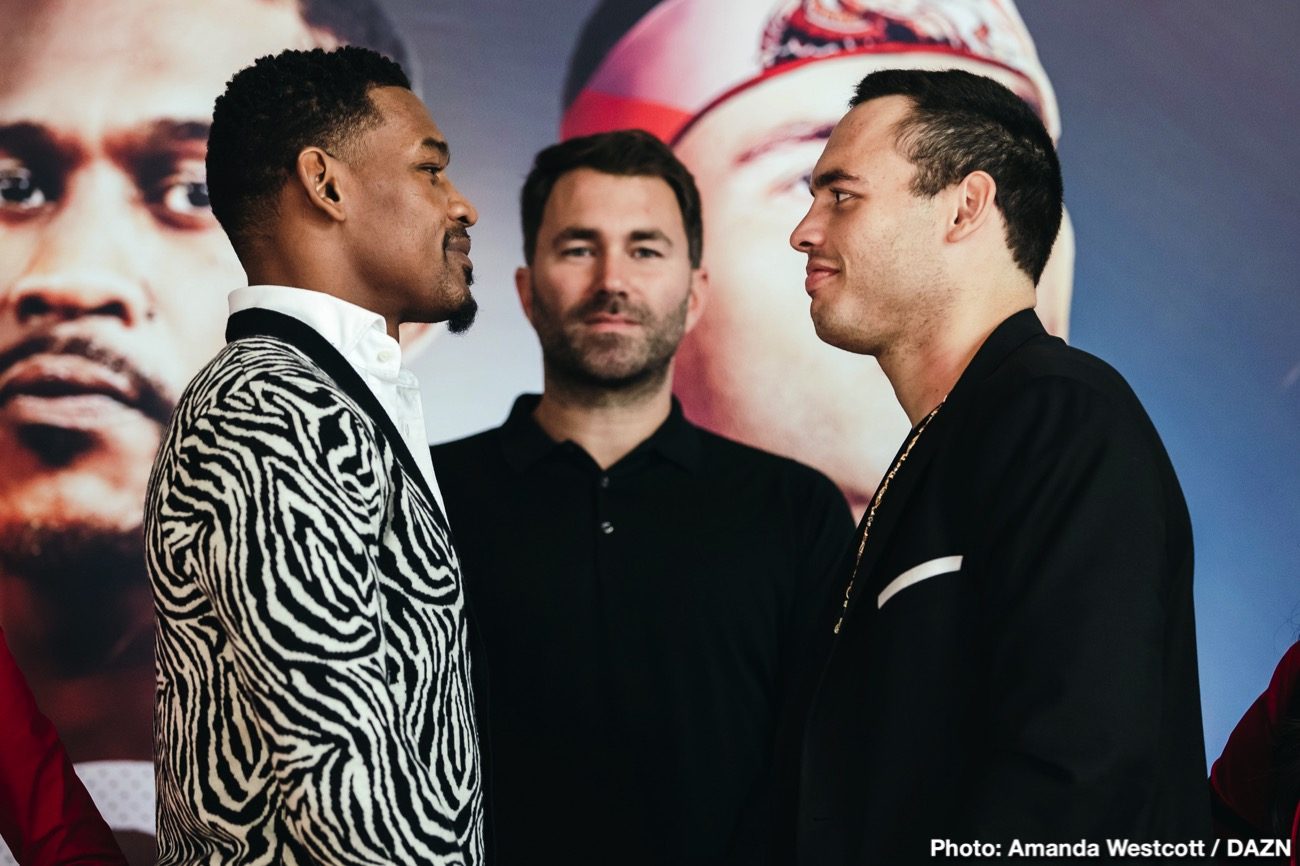 By Dan Ambrose: Eddie Hearn wants the winner of the December 20th fight between Daniel Jacobs and Julio Cesar Chavez Jr. to face Billy Joe Saunders or Callum Smith next. Hearn likes the idea of Jacobs or Chavez Jr. battling Callum or Saunders in their next fight in the first half of 2020.

Former IBF/WBA middleweight champion Jacobs (35-3, 29 KOs) will be a heavy favorite to defeat the 33-year-old former WBC 160-lb Chavez Jr. (51-3-1, 33 KOs), but you never know. Chavez Jr. looked like a transformed fighter in his last bout against journeyman Evert Bravo last August in stopping him in the 1st round.

This was easily the best Chavez has looked since his lopsided 12 round unanimous decision win over John Duddy in June 2010. Chavez’s physique looked muscular, and his shots were powerful. The way Chavez performed against Bravo, he could potentially pull off an upset against Jacobs. Chavez Jr. has clearly discovered the Fountain of Youth in 2019.

Jacobs and Chavez Jr. will be fighting on December 20th on DAZN at the Talking Stick Resort Arena, in Phoenix, Arizona.

“We’ve got Callum Smith, and Billy Joe Saunders. The winner of this fight could move forward and fight one of those guys,” said Eddie Hearn to Fighthype about the options for Chavez vs. Jacobs winner.

It’s difficult to imagine the Jacobs vs. Chavez Jr. winner agreeing to fight Saunders or Callum in their next fight. That just doesn’t seem likely. Although Jacobs does take risky fights on occasion, he’s generally calculated. He doesn’t take risks unless it leads to big fights like against Canelo Alvarez and Gennadiy Golovkin. Callum and Saunders aren’t big names, and they’re nothing but trouble for a fighter like Jacobs.

There’s not much for Jacobs to gain in fighting either of them. He’s likely hoping to bide his time, and wait to see if Canelo or GGG move up to 168. There aren’t any big names in the 168 lb. division, and it’s a bad weight class for a fighters with chin problems. Jacobs doesn’t have the greatest set of whiskers. He’s already been stopped once in his career by Dmitry Pirog, and he’s been hurt a number of times against other fighters.

Saunders will be in action tonight in defending his WBO super middleweight title against unbeaten Marcelo Esteban Coceres (28-0-1, 15 KOs) at the Staples Center in Los Angeles, California. There’s little risk of Saunders losing to Coceres, but he was almost knocked out in his last fight by Shefat Isufi last May. That was supposed to be a mismatch, but Isufi caught Saunders with a big punch and almost knocked him out. 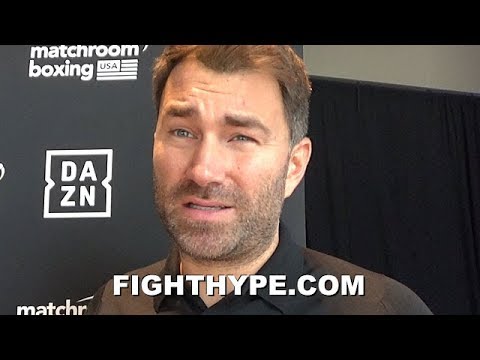 Chavez can transform his career with win – Hearn

“It’s a really important fight for both guys. Danny Jacobs is moving up to 168. This is the perfect fight for him in terms of style, and profile. Also, Chavez Jr. can transform his career in one night. He’s up for the fight, and he’s healthy,” said Hearn.

Chavez Jr. can definitely turn his career around with a victory over Jacobs on December 20, but he’ll need to get to him quickly. Jacobs is a slow starter, and he tends to get better in the second half of his fights. If Chavez Jr. jump on Jacobs in the first six rounds, he could stop him like Pirog did in 2010. Pirog used pressure to get to Jacobs to halt him in the 5th round.

“Looking forward to the night on December 20 on DAZN,” said Hearn. “So basically, Chavez hasn’t signed up for the fight, and hadn’t signed up for VADA, and VADA turned up to test him. He said, ‘I didn’t sign up for the fight yet,’ so he didn’t test. So they chose not to license him. And so we went to the ABC and the other boxing Commissions, and they said, ‘We’ll license him, no problem. He has to sign up for testing,’ which he’s done in full, and on we go. Julio is kind of paranoid individual where he’s had so many bad things happen in his life.

“He [Chavez] needs to get this right. He has an opportunity for redemption on December 20th at the site of his father’s last professional contest. So it’s really interesting. For both,” said Hearn when asked if this is a ‘must win’ for Chavez Jr. “I think people write him [Chavez Jr.] off all the time But if he were to win, it would be a huge star in the sport. But Danny is expected to win. He’s moving to 68,” said Hearn.

VADA attempted to drug test Chavez Jr. in Las Vegas, but he chose not to be tested. According to Hearn, Chavez Jr. didn’t want to be tested because his fight with Jacobs wasn’t yet signed. Nevertheless, Chavez wasn’t licensed for the fight in Nevada, and Hearn took it to Arizona to stage it.

It’s unclear what Jacobs’ thoughts are about Chavez’s drug testing issues. Hopefully he tests clean for the fight so that it doesn’t get canceled. If Chavez Jr can’t fight for any reason, then Gabriel Rosado is standing by as the potential replacement opponent.

Jacobs will feel better at 168 – Hearn

“I think it had become such a struggle for him to make 160,” said Hearn about Jacobs moving up to 168. “If you’d seen how he made weight for that fight against Canelo, it was brutal. He needs this move up in weight. I think fighters sometimes hold onto a weight class for too long, and I think continuously make 160. And I think now he’ll feel so much better at 168. He will be the smaller man in the fight. Chavez is a really big 168. So we’re going to see,” said Hearn.

“It was a cagey fight, but a brutal knockout in the end,” said Hearn about Canelo Alvarez’s win over Sergey Kovalev. “You’ve got to give huge respect to Canelo. He’s become a four division world champion, and I think he’s pound-for-pound #1. Everyone is chasing him, and wants a fight against Canelo, but very few have beaten him,” said Hearn.

Jacobs MIGHT perform better at 168, but then again he might be the same fighter he’s always been. Fighters always say they’ll perform better when they move up in weight, but they generally are the same if not worse. With Jacobs, he’s as good as he’s going to be. He won’t likely be any better at 168 than he was at 160. Jacobs doesn’t need to worry much for this fight because he’s only facing Chavez, and not a super talented fighter.

“Great fight, a little under a month to go, and both guys training hard,” said Hearn about the Anthony Joshua vs. Andy Ruiz Jr. rematch. “Both guys look ready. AJ has had a much better camp this time in terms of preparation for Andy Ruiz. Hopefully that’s the difference, because it’s a 50-50 fight. It’s the biggest fight of the year, and we can’t wait for it. Yeah, some people say he’s lost 3 lbs. But in some pictures, he looks like he’s lost 10, and sometimes he looks like he’s put on 10.

“I don’t think there’s going to be that much of a difference in Andy Ruiz’s size or his performance. Andy Ruiz is going to be Andy Ruiz. It’s up to Joshua to make a difference in this fight. It’s always a must win. But it’s certainly not the end of their careers if they lose. Joshua wants to become a two-time world champion and Andy Ruiz wants to keep his belts,” said Hearn

Anthony Joshua and Andy Ruiz Jr. are popular enough to where the loser will still be popular with the boxing public. Joshua will be in great shape, no matter how badly he loses. He has a dedicated fan base in the UK that will stick with him through thick and through thin. With Ruiz, he’s not as big a name in the U.S as Joshua is in the UK. A loss for Ruiz would hurt him a lot more than it would Joshua. Ruiz has just now become popular since his 7th round knockout upset of Joshua last June.

“The sensible thing to do would probably have a comeback fight, but we had the rematch clause, and AJ wants to go for it,” said Hearn. “We feel 9 times out of 10, he should be beating Andy Ruiz. So if we’re right, he’ll beat him in Saudi Arabia on December 7th and win his belts back.

Ruiz may need to use more movement to catch up to Joshua in the rematch. It’s likely that Joshua will be trying to get away from Ruiz in the first half of the contest on December 7th.