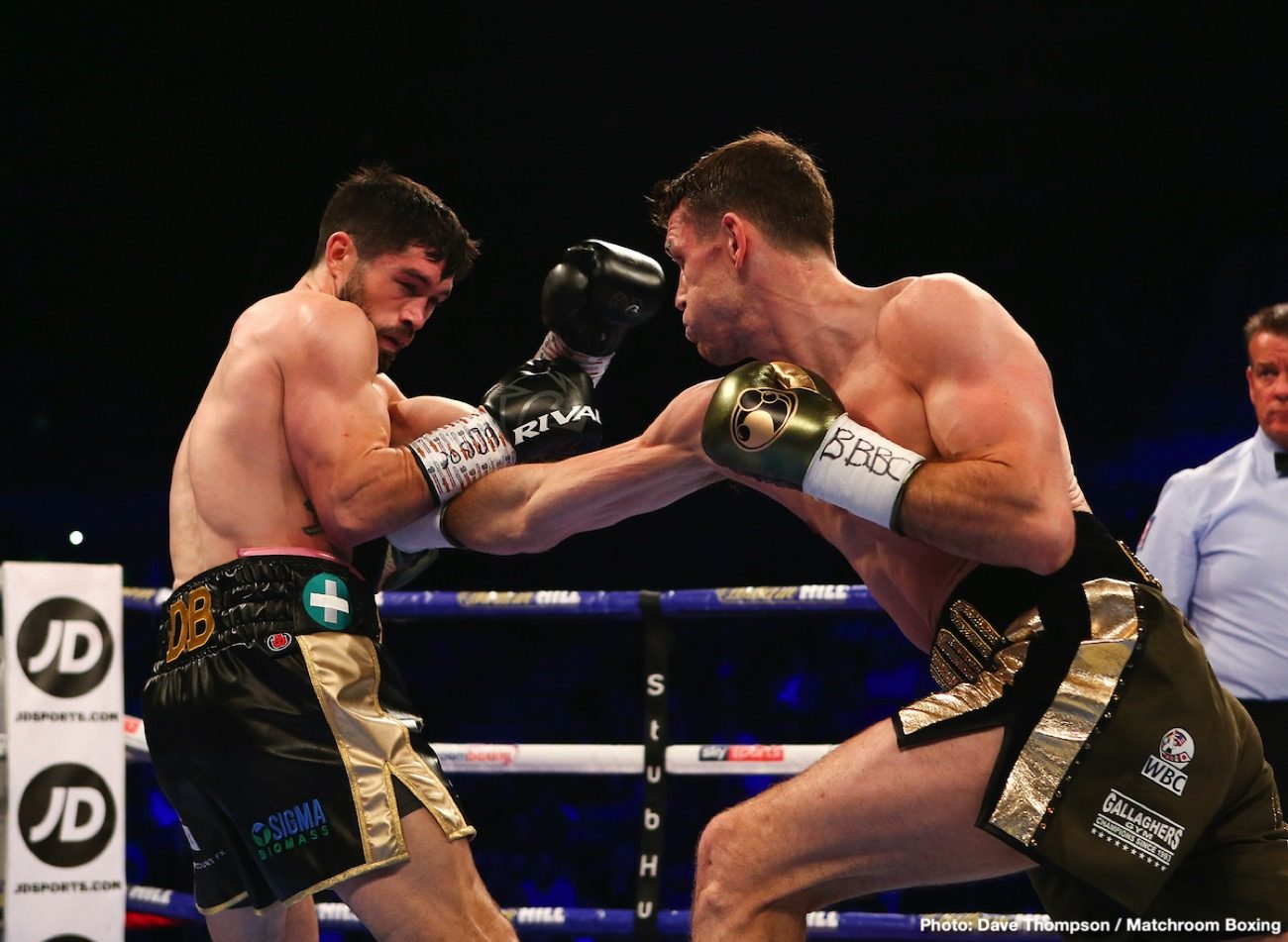 By Scott Gilfoid: Eddie Hearn insists that Callum Smith’s HIGHLY questionable 12 round unanimous decision victory over John Ryder (28-5, 16 KOs) last Saturday night wasn’t a ROBBERY. Rather it was just a simple case of the 3 judges scoring the contest by a set of wide scores that didn’t match the fight that boxing fans saw.

Hearn says he has no doubt in his mind that the 6’3″ Smith (27-0, 19 KOs) earned the victory with his boxing and his power game. Unfortunately for Hearn, the boxing public disagrees with him. They saw Callum losing, and looking dreadful in being given a decision in his hometown in Liverpool, England at the M & S Bank Arena. The scores were 116-112, 117-111, 116-112.

A rematch would be in order, but that’s not in the cards for Ryder unfortunately. Smith is moving on, and he’s already calling out Canelo Alvarez and Billy Joe Saunders.

Hearn NOT happy with scores for Smith vs. Ryder

“It was a really good fight, and a good performance by John Ryder,” said Hearn to Boxing Social about Smith’s win over Ryder. “I thought it was a close fight. When I got in the ring, I felt Callum Smith was going to get the fight, but unfortunately I didn’t agree with the scorecards. They sort of magnify what was a close fight, and I felt that John boxed out of his skin. But after six rounds, I felt that Callum was comfortably ahead, and John had a good back end of the fight.

“It was a good fight. I knew you still had people that thought John Ryder won a close fight, but nowhere near if it was a split decision or even if was 115-113 across the board,” said Hearn. “But it’s kind of like if everybody thought it was close, which they did. We went through press row, didn’t we? Two to Callum Smith, two to John Ryder, but no one had those scores,” said Hearn.

Given that the fight took place in Smith’s backyard in Liverpool, it’s not all that surprising that Hearn felt he was going to “get the fight.”  I mean, we are talking about Smith fighting at home against a visitor from London.

It was always going to be next to impossible for ‘The Gorilla’ Ryder to win a decision in Callum’s hometown. Most boxing fans thought it wouldn’t go to the scorecards, since Ryder had been written off by most everyone going into the fight.

Callum Smith will get Saunders or Canelo fight next – Hearn

“If we were watching it, and the judges were scoring it like that, then why aren’t we scoring it like that?” said Hearn. “Callum is talking about the big fights, and he wants the big fights, but he wanted to win tonight. He wanted to look good, and he trained hard. But John Ryder boxed really well. It was a career-defining performance by him [Ryder], and he went out and made a big name for himself.

“I think he’s in a great position. He put in a great performance, and won a lot of fans tonight,” said Hearn. And Callum Smith probably didn’t put in the performance that he wanted. A lot of those big names are looking at him right now, and going, ‘Actually, I’ll fight Callum Smith. I think they’re both in great positions, and I think they both gave a great fight tonight. More so after tonight,” said Hearn when asked if Canelo Alvarez is a possibility for Callum now.

“I think his [Canelo] next fight is going to be 168, and if that’s the case, he’ll fight Billy Joe or Callum Smith,” said Hearn. “Ultimately, Canelo is the boss, and he’ll choose who he’s going to choose, and we’ll gratefully accept one of those. I don’t think he’ll [Canelo] come to Anfield, to be honest with you. I think Golovkin would be the Anfield fight. We’ll see,” said Hearn.

Callum shouldn’t hold his breath hoping that Canelo Alvarez will face him next, because he’s going to want to fight someone that U.S boxing fans have heard of. Let’s be real; only the hardcore boxing fans in the States know who Callum is, and after his performance against Ryder, they’re not going to want to see Canelo fight him.