Errol Spence will have no delay with career, says WBC president Sulaiman

By Allan Fox: WBC president Mauricio Sulaiman is confirming that IBF/WBC welterweight champion Errol ‘The Truth’ Spence Jr. will NOT have any delay with resuming his career following his drunken driving car crash on October 10 in Dallas, Texas.

Sulaiman said the WBC reached out to Spence’s team during the WBC convention, and they were given a medical report that showed his status. From that, Sulaiman determined that the 29-year-old Spence (26-0, 21 KOs) should have no problems resuming his career without any delay.

The early reports were that Spence hadn’t broken bones during the accident, but he did suffer facial lacerations. He was thrown from his Ferrari 488 Spider during the crash, and he hadn’t been belted in.

Spence still hasn’t spoken to the media, and there have been no updates on his condition since shortly after his car crash on the 10th of October. He spent six days in the intensive care unit at a hospital in Dallas following his accident. He was charged with DWI

“It’s a miracle that he’s [Errol Spence] is still with us. The medical report is clear,” said WBC president Mauricio Sulaiman to Fighthype about Spence. “He had NO damage, and not major situation to prevent his career from going on. He’s blessed, and he’s going to be a living testament to what not to do [drink and drive], and what to do properly.

“During our convention, we contacted them, and the medical report has been sent with the status of the timing. As of today, there is no delay from the accident from his boxing career,” said Sulaiman about Spence.

Spence hasn’t fought since beating WBC 147-lb champion Shawn Porter by a close 12 round split decision on September 28 at the Staples Center in Los Angeles, California. It wasn’t a good performance by Spence, who chose to brawl with Porter through the full 12 rounds. Although Spence did show that he could beat Porter at his own game of slugging, he barely won.

It looked like Spence chose to fight down to the level of his competition rather than use his superior boxing skills to dominate Porter. Recently, Spence’s trainer Derrick James revealed that Errol wanted to prove that he could defeat Porter fighting his style. Spence accomplished his goal, but it wasn’t a great performance for him. He’s not cut out to fight in that style against brawlers like Porter, and he took a risk in fighting that way.

“It’s a good positive for boxing and a tremendous fight,” said Sulaiman about the Deontay Wilder vs. Luis Ortiz fight. “He’s [Ortiz] looking very good, he’s looking ready to go, and as he said, he doesn’t want any bells. He wishes there are no rounds to just go continuous.

“Well, it’s a high level fight between two great heavyweights. Wilder has been champion for five years, and Ortiz is experienced, and very strong. So anything can happen in round one or in 12 rounds.

“I’m very excited for this fight. It’s been a great moment for heavyweight boxing for two decades. Ever since Lennox Lewis retired, the heavyweight division didn’t have that great popularity. Now you have Wilder, and now you have Ortiz, now you have [Anthony] Joshua and [Andy] Ruiz doing the rematch. But you also have a whole list of heavyweight contenders like Tyson Fury, Dillian Whyte and [Oscar] Rivas. 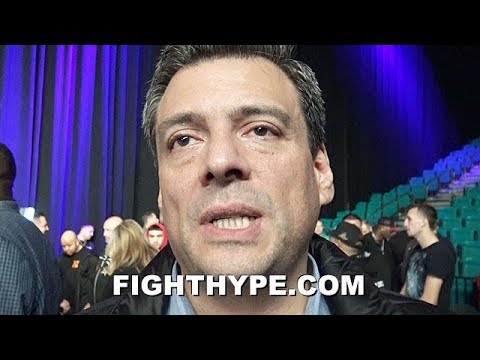 “There are so many champions are looking to get an opportunity to shine,” said Sulaiman. “It’s just a great fight, and a great moment in boxing,” Suliaman said about the Wilder vs. Ortiz rematch. “I’m happy and thrilled to be here.”

This is a good match-up between two big punchers. WBC heavyweight champion Deontay Wilder (41-0-1, 40 KOs) will be looking to stop Luis Ortiz (31-1, 26 KOs) for the second time. Last year, Wilder knocked out Ortiz in the 10th.