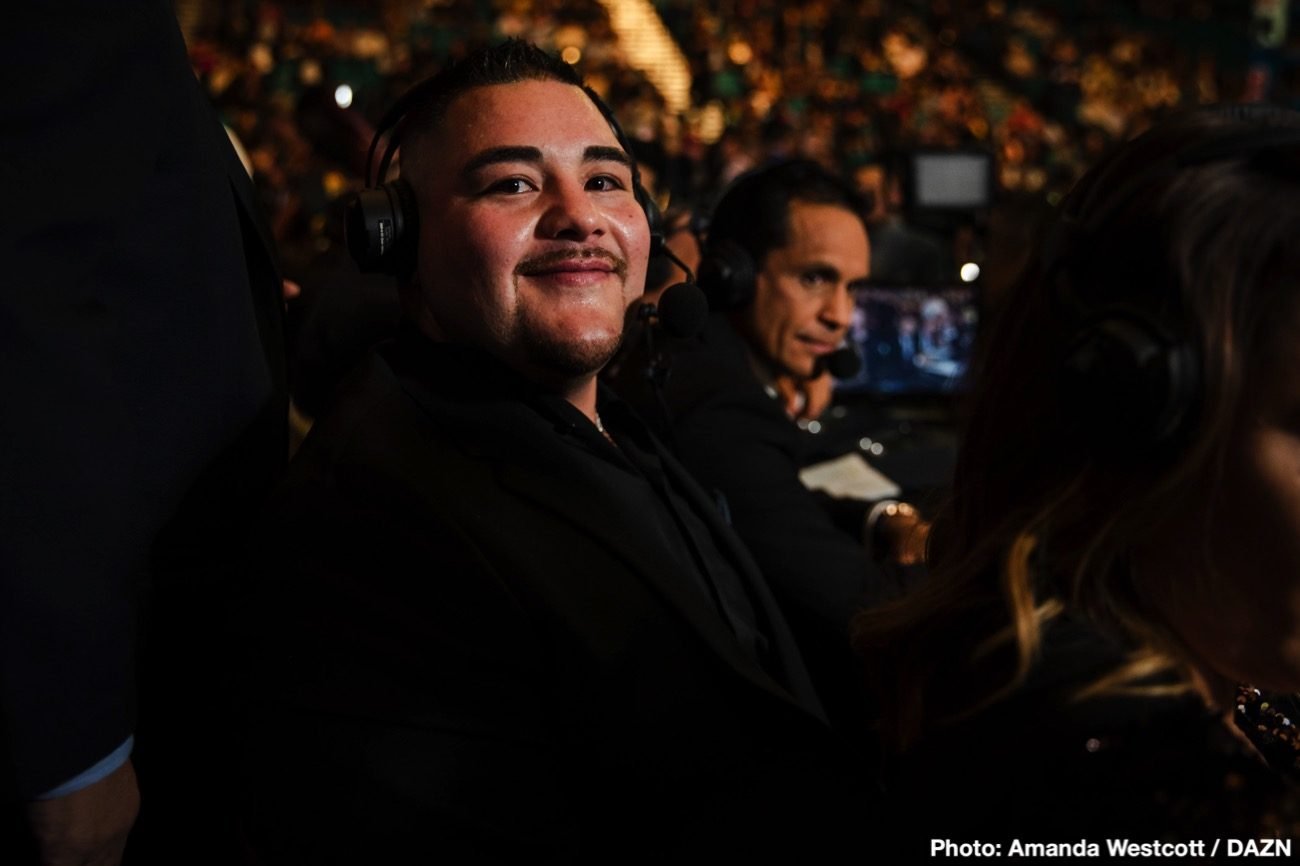 By Robert Addams: Leonard Ellerbe of Mayweather Promotions is picking Andy Ruiz Jr. to do a number on Anthony Joshua in their rematch next month on December 7th in Saudi Arabia. According to Ellerbe, IBF/WBA/WBO heavyweight champion Ruiz Jr. (33-1, 22 KOs) has the style to enable him to beat Joshua once again. He says Ruiz’s fighting style is “tailor-made” to beat Joshua.

It’s thought that Joshua (22-1, 21 KOs) will change things up in the rematch, and come up with a better game plan to neutralize the attacking style of Ruiz. That may not happen.

Joshua isn’t a good mover, and never has been at any point in his professional and amateur career. To win the rematch with Ruiz, Joshua will need to be mobile to keep him on the outside. A jab isn’t going to keep Ruiz from getting to Joshua to nail him with combinations to the head.

Joshua is still with the same trainer Rob McCracken, and that means he’s not going to progress. McCracken has failed to improve Joshua’s flaws from his amateur days, and he’s not expected to do anything now. As the saying goes, ‘Garbage in, garbage out.’

“I think Ruiz kicks his a– again,” said Ellerbe to Fighthype in picking Andy Ruiz Jr. to beat Anthony Joshua in the rematch. “I just think Ruiz is better. He has his number. style-wise, he’s tailor-made for getting it done. There were certain things that I saw when I went back and watched the [Joshua-Ruiz] fight, because I didn’t watch it live.”

Ellerbe noted that Joshua looked completely lost in the Ruiz fight, and that’s something that won’t go away easily the rematch. The way that Ruiz dominated Joshua, it’s something that will likely be there still in the rematch. It would have been smarter for Joshua to let a year or two go by before he fought Ruiz again. Instead, Joshua and his promoters wanted to take advantage of the rematch clause.

They could not exercised, but they would have been walking away from a lot of money. So instead of doing the smart thing in taking the rematch down the road, Joshua and Matchroom Boxing opted for the money. If this blows up in their faces, then they’ll have learned a painful lesson.

Joshua will try and box but it won’t work – Ruiz

“I’m ready for December 7th, and I’m ready to keep these titles,” said Ruiz about his rematch with AJ. “The point wasn’t to drop a lot of weight. It was to stay in the gym, and stay active, and eat right. The only thing I’m going to do is be eight pounds lighter than I was on June 1st. I still feel strong, and I still feel fast.

“I’m pretty sure Joshua is going to be boxing me around, but with my skills and my talent, and my pressure, it’s not going to make any difference.

“I think he’s going to try and box me a round a little bit, and use his jab,” said Ruiz about what he expects Joshua to do in the rematch. And I don’t think he’s going to go head-to-head with me, but if he does, it’s even better. We’ve been working on different styles.

Joshua couldn’t keep Joseph Parker off of him when he jabbed in their fight in 2017. The only reason Joshua was able to keep Parker on the outside was because of the referee, who appeared to be unsure of the rules of boxing. Ruiz will get to Joshua just like before. It’s inevitable.

“As long as we stay active, throw our combinations, and do what we got to do, we’re going to win this fight,” said Ruiz. “At first I was a little iffy, but Saudi Arabia is such a beautiful country, and I’m excited to be there.

“If you have the right people around you, those are the type of people that are going to keep you focused mentally where you need to be. So right now, I have a lot more to prove. A lot of people are saying that it was just a lucky shot, but no way,” said Ruiz.

Andy is a combination puncher, and you wouldn’t expect him to veer away from that style of fighting. It’s going to be up to the 6’6″ Joshua to show that he can handle Ruiz’s fighting style, because if he can’t, he’ll get knocked out again. It might be even faster in the rematch than the first time.

“I’ve been working so hard for this fight, and I want it,” said Ruiz. “That’s exactly what we’re going to do on December 7th. I think getting all this love from the people,” said Ruiz Jr. when asked what’s the most exciting thing about being heavyweight world champion. “Without the people and the fans, I think we’re nothing. So I appreciate all my fans, all my supporters, all my loved ones, and the main thing is I’m going to win, and win for my family and for Mexico.

“I’m just ready and excited for December 7th. I think the speed, the movement of the head, and I want to be a little lighter, a little faster in throwing combinations,” said Ruiz.


« Nikita Ababiy in action this Saturday LIVE on DAZN