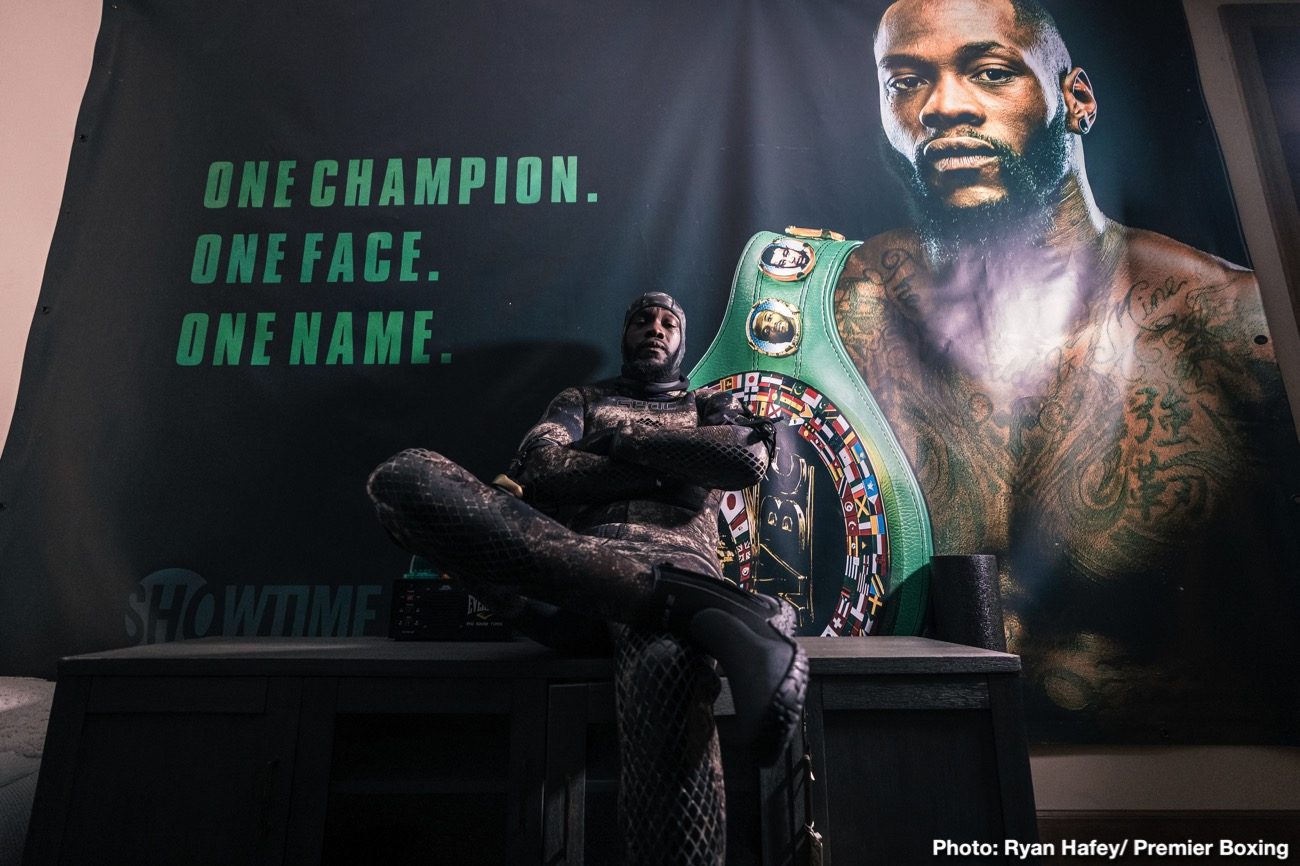 By Charles Brun: Deontay Wilder has come to the conclusion that Tyson Fury doesn’t want the rematch with him next year. WBC heavyweight champion Wilder (41-0-1, 40 KOs) says he believes that the experience by Fury of getting dropped hard on the canvas in the 12th round of their fight last December was too much for him to ever want to get back into the ring with him again.

Wilder says if Fury backs out of their fight, he’s going to have to “pay the consequences” for that. He’s already signed the contract for the fight.

Fury has a cut over his right eye that might not hold together for the rematch with Wilder. They’re supposed to be fighting each other in February, but it’s uncertain whether Fury’s still healing cut will enable him to make it through training camp without causing the fight to be postponed.

Fury took part in a risky WWE match on October 31, and some boxing fans wonder why he would take that risk given that he has a rematch with Wilder coming up. Stuff like that makes one wonder whether Fury really wants to face Wilder again.

“No, Fury don’t want it. I don’t think he ever wanted the rematch,” said Wilder. “A lot of people gave him sympathy off of mental illness, but that’s something that 9 out of 10 of us have thought about a lot of time. Being that he was from another country coming over here. In America we always feel sorry for people, especially if they’re not of this country. Some people came up to me and said, ‘I wanted him [Fury] to win because of his story.

For him, I think he wanted to come in and say he fought me. A lot of people gave him a moral victory, and he wants to run with that. I don’t think he ever wanted a rematch because I have power. The way he got dropped with his eyes going back in his head, and his neck stretched out like that,” said Wilder about Fury.

The fight between Wilder and Fury was scored a 12 round draw last year, a lot of boxing fans felt that it should have been ruled a knockout in the 12th. Wilder laid Fury out with a vicious right-left combination that dropped him hard. Fury didn’t move while he laid there on the canvas.

The knockdown of Fury hard to watch because he was badly hurt. It’s still baffling to this day that the referee didn’t stop the fight.

“As a fighter, you don’t want to feel that again. You don’t want to get hit on the face and see your body doing that, because you don’t know what’s going to happen next time. We know lives have been taken in this sport. I understand him running.

“He [Fury] can run, run, run as far as he can, but he’s got to remember he signed the contract. Everyone knows that when you sign something, the pen is a silent warrior. You’re going to have to pay the consequences of getting out of that. The fight will happen unless they give us some money,” said Wilder about Fury.

Going into the fight with Wilder has to be a hard thing for Fury to get motivated for given how badly hurt he was by him. On top of that, Fury was hurt by Otto Wallin in his last fight in September. That match was supposed to be a tune-up fight for Fury, but Wallin almost beat him. The 6’6″ Swedish heavyweight, who isn’t a puncher, shook Fury to his boots with a left hook in the 12th.

“How did he do?” asked Wilder when told about Fury’s recent WWE match on October 31 in Saudi Arabia. “Did he? [Fury knocking out his wrestling opponent with a right hand]. That ain’t realistic,” said a laughing Wilder in making fun of Fury’s lack of power.

“Good for him. I’m always excited to see fighters outside of boxing being able to do things. People look at boxing and think we’re just fighters with one-dimension. That’s all we do is fight, and train and fight. But we’re still people,” said Wilder.

Wilder is happy that Fury can do things outside of boxing. That’s a positive for the sport when fighters do that. But as far as Fury being able to score one-punch knockouts in the sport of boxing, Wilder sees that as unrealistic. Fury isn’t a puncher, and never has been.

“Ortiz is a very smart fighter, and he’s a counter puncher,” said Wilder. “He’s great at what he does,” said Wilder on Tuesday during a workout with the boxing media. “I can understand why I’m the only person in the top five giving him an opportunity. What I didn’t do in the last fight was I didn’t throw enough jabs at him. I would say that I could have put my feet in position a little bit more as well.

“It’s very awkward when you have an orthodox [Wilder] and southpaw [Ortiz] in there. We all know that. I think I did very well under the conditions I was under at that moment of time in the fight, and I’m looking forward to having a good fight with him as well. Six years is max for me to finish my career off at,” said Wilder.

Wilder will be defending his World Boxing Council title against Luis Ortiz (31-1, 26 KOs) in a rematch on November 23 on Fox Sports PPV at the MGM Grand in Las Vegas, Nevada. The tricky southpaw Ortiz is a real threat to Wilder, as he hurt him in the 7th round last year in their first fight.