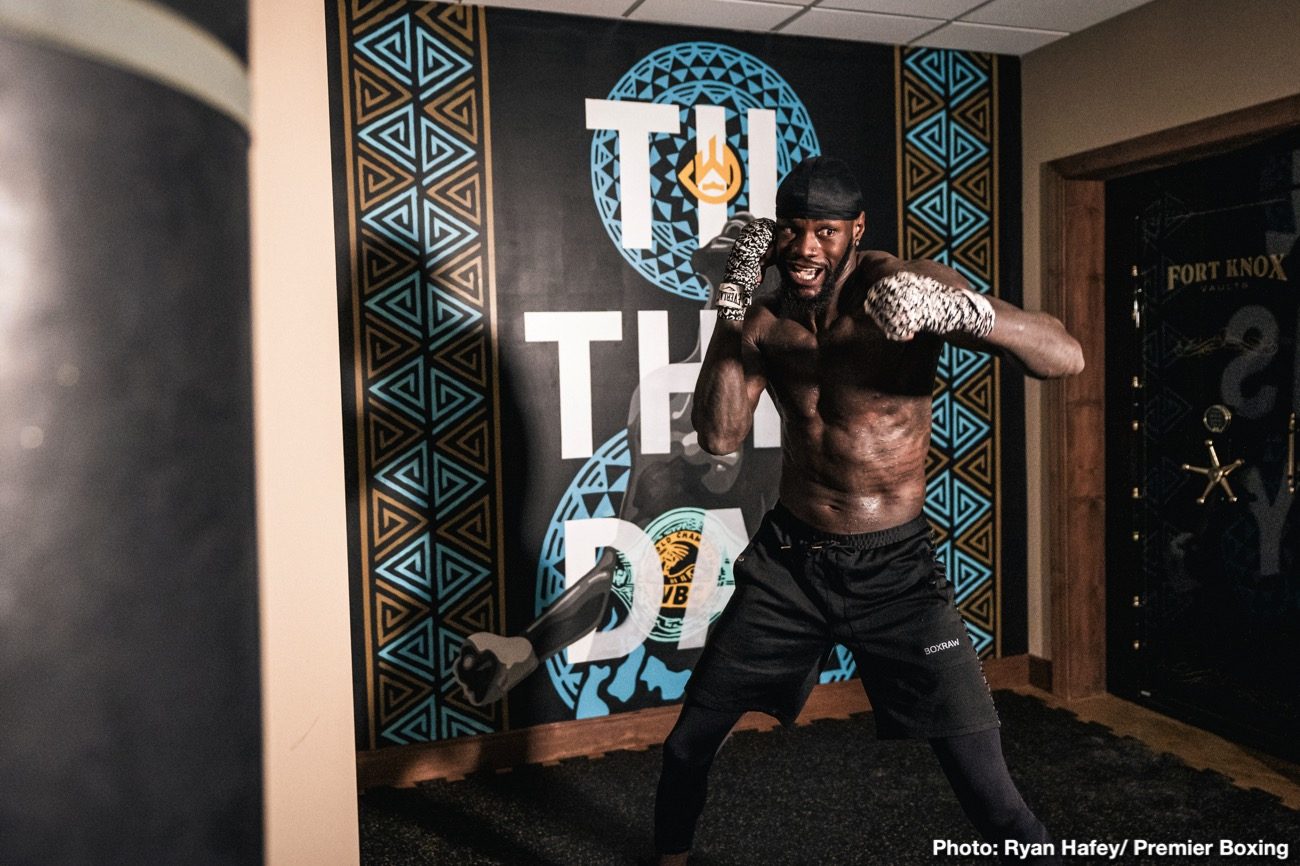 By Kenneth Friedman: Knockout artist Deontay Wilder says the World Boxing Council can give their WBC Franchise tag to someone else because he DOESN’T want it.  Wilder (41-0-1, 40 KOs) doesn’t like the idea of having a title that doesn’t require him to defend against his mandatory challengers.

The WBC hasn’t said yet whether their Franchise tag will be a permanent fixture or not. Given the huge backlash from boxing fans, it’s possible the sanctioning body may do away with in the future.

If champions like Wilder turn down the Franchise belt, it’s going to make the WBC look bad. They won’t want to continue to be foiled at their attempts to give their Franchise tag to certain champions if they keep getting turned down.

Wilder feels that’s not sporting for a champion to be able to ignore his mandatory challengers.

Some fans believe Wilder will be next in line to be offered the WBC Franchise title. But now that Wilder is making it clear he doesn’t want the title, WBC likely won’t offer it to him.

Thus far, Saul Canelo Alvarez and Vasiliy Lomachenko have given the WBC Franchise tag by the sanctioning body, and neither of them turned it down. According to Devin Haney, Lomachenko wanted the Franchise tag for some reason.

“If Canelo accepts it and he’s happy with it, then congratulations,” said Wilder about the WBC Franchise tag given to Canelo and Lomachenko. “The only thing I can say about it is that many people have asked me about the Franchise belt. I don’t know much about it. What I’m hearing is it allows you to stay a champion, and you don’t have to fight mandatory’s and stuff like that.

“If that’s the case, then I’m not interested in that. I want the mandatory because that’s what makes guys work their way up, and work hard to become #1 and #2, and then become mandatory.

Why would you crown someone that eliminates all that and you don’t have mandatory’s and different things like that. I would love to be able to have a mandatory and him sitting, and the more he’s waiting, the more he’s getting frustrated about certain things. And then when the fight comes, ‘you’ve had me waiting all this time already.’

Canelo and Lomachenko the only fighters to hold Franchise tag

The WBC Franchise belt isn’t seen as a prestigious title by a lot of boxing fans, because it’s a title that is non-transferable. That means it can’t be lost. In theory, a Franchise champion can lose every fight for the remainder of their careers, and they stay Franchise champion. It’s a joke in a way, and it’s hard to imagine fighter wanting it.

Canelo and Lomachenko obviously had tough challengers breathing down their necks in the WBC’s rankings at the time they were given the Franchise tag. That might help explain why they didn’t reject the tag. Lomachenko would have had to defend against Devin Haney, that’s a fight that might have lost. Loma is starting to age, and he’s not the guy he once was. Being given the Franchise tag may have saved Lomachenko from another career defeat. As for Canelo, he would have had to defend his WBC title against mandatory Jermall Charlo, and that’s a fight that would have been a hard scrap for him.

Wilder: Being a Franchise champion wouldn’t fit me

I’m a dangerous fighter, and I have a devastating right hand,” said Wilder. “That’s what I’ve been doing throughout my career, giving the fans what they want to see and that’s knockouts. It’s good to see guys go in there and go from one round to twelve rounds, boxing and showing skills. But at the end of the day, people got things to do, and they want to see knockouts.

“They want to be able to say, ‘Damn, that was a great fight.’ That’s what I give people. So hopefully nothing comes my way about a Franchise belt. I don’t have nothing against guys that are taking it and stuff. I’m just listening to the fans, and I’m listening to my heart as well. I don’t think being a Franchise champion would fit me. If they want to give someone else that belt over me, I’m fine with that,” said Wilder.

The WBC is going to need to look in a different direction than Wilder when they had out their next Franchise tag to a champion. It’s doubtful that ANY champion with the WBC will agree to the Franchise tag at this point, given all the criticism from boxing fans. Canelo and Lomachenko are the only ones, and both of them arguably had a reason to agree to it.